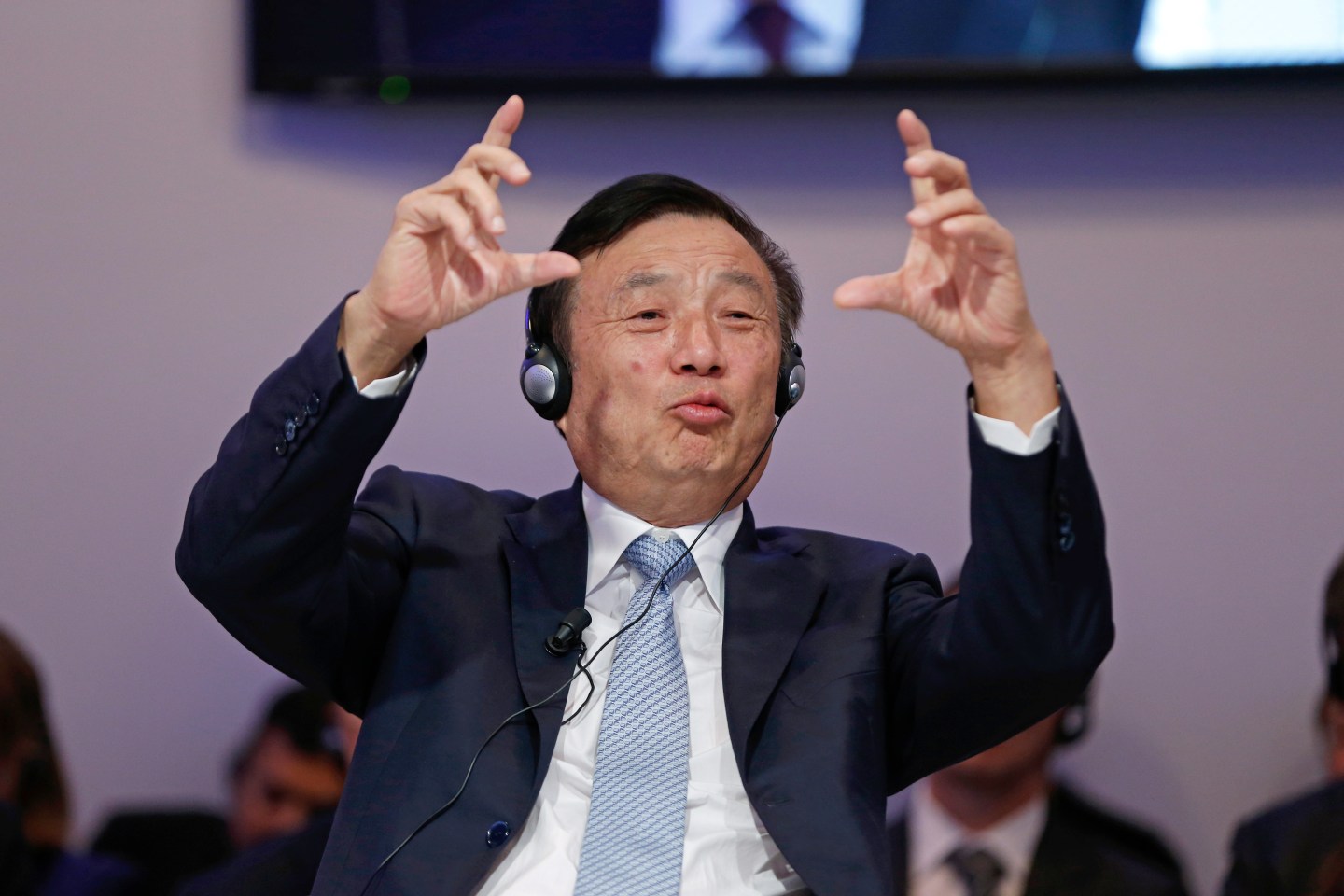 Ren Zhengfei, Huawei’s secretive founder and CEO, just became slightly less secretive. On Thursday the Chinese businessman sat down for a rare public interview at the annual World Economic Forum in Davos, Switzerland. Zhengfei, a controversial figure who got his start as a People’s Liberation Army officer and went on to found China-based telecom giant Huawei, has rarely granted media interviews, let alone appearances that are broadcast online. (Zhengfei even took a few seemingly unscripted questions from the audience.)

Here, in no particular order, are seven takeaways from his conversation with BBC correspondent Linda Yueh:

1.) Zhengfei comes from humble origins. “We had salt to cook with so we were considered wealthy,” he told his interviewer. (His company, Huawei, is expected to have raked in a whopping $46 billion last year—that’s a whole lot of salt.)

2.) The aging entrepreneur says he joined the Chinese army “by chance.” According to Zhengfei, fabric was rationed at the time (the 1970s), which led the government to build a factory that makes synthetic fabric. Because the factory was located in the middle of nowhere, very few workers were willing to go build it. So the government then called in the military, which in turn corralled anyone with a university education to come help. “That was how I entered the military,” said Zhengfei, a former civil engineering student. “I think that was a good thing to do.”

3.) Zhengfei has nothing but love for the United States. That’s a little hard to believe given that the U.S. government has largely kept Huawei out of the American market, at least when it comes to telecom-networking equipment. (The company also sells mobile phones and other electronics.) But Zhengfei even went as far as to say he has never thought that the United States isn’t fair to Huawei. “The most important thing in the U.S. is openness,” said Zhengfei. “As for our position today, we don’t just look at the people around us as competitors, but rather as friends.” To help illustrate his point, the CEO used an interesting analogy: “We always say, we divide the watermelon in eight pieces and we only want one piece.”

4.) When asked if his company has ever been asked to use its networking equipment to eavesdrop on communications in China or elsewhere, Zhengfei insisted that has never happened. “There’s no way we can possibly penetrate into other people’s systems and we have never received such a request from the Chinese government,” he said. Some U.S. officials would probably beg to differ, though that hasn’t stopped Huawei’s growth in most non-U.S. markets.

5.) One of the secrets to Huawei’s success, according to Zhengfei, is its extremely focused dedication to serving its customers, come hell or high water—literally. Case in point: Huawei operates in 170 countries and has never ceased services even when its own employees are faced with danger. Some examples given by Zhengfei include a tsunami, a civil war, and an earthquake.

6.) The biggest threat to Huawei’s future isn’t war or natural disasters or competitors or even the U.S. government. “The biggest enemy is not others—it’s ourselves,” said Zhengfei. The billionaire CEO (and largest shareholder of the company) says he fears Huawei will grow too fast and make too much money. “We are a small grass but we try to grow from a small grass to a small tree,” said Zhengfei. (Who knew he was such a poet?)

7.) Lastly, Zhengfei maintains that he is neither secretive nor mysterious. At least, not by intention. “I am not mysterious at all,” Zhengfei told the audience. “I know nothing about technology, and I know nothing about finance. If you don’t know much you better not show up, otherwise people might see the back of your pants are very dirty. I do not maintain this low profile on purpose.”