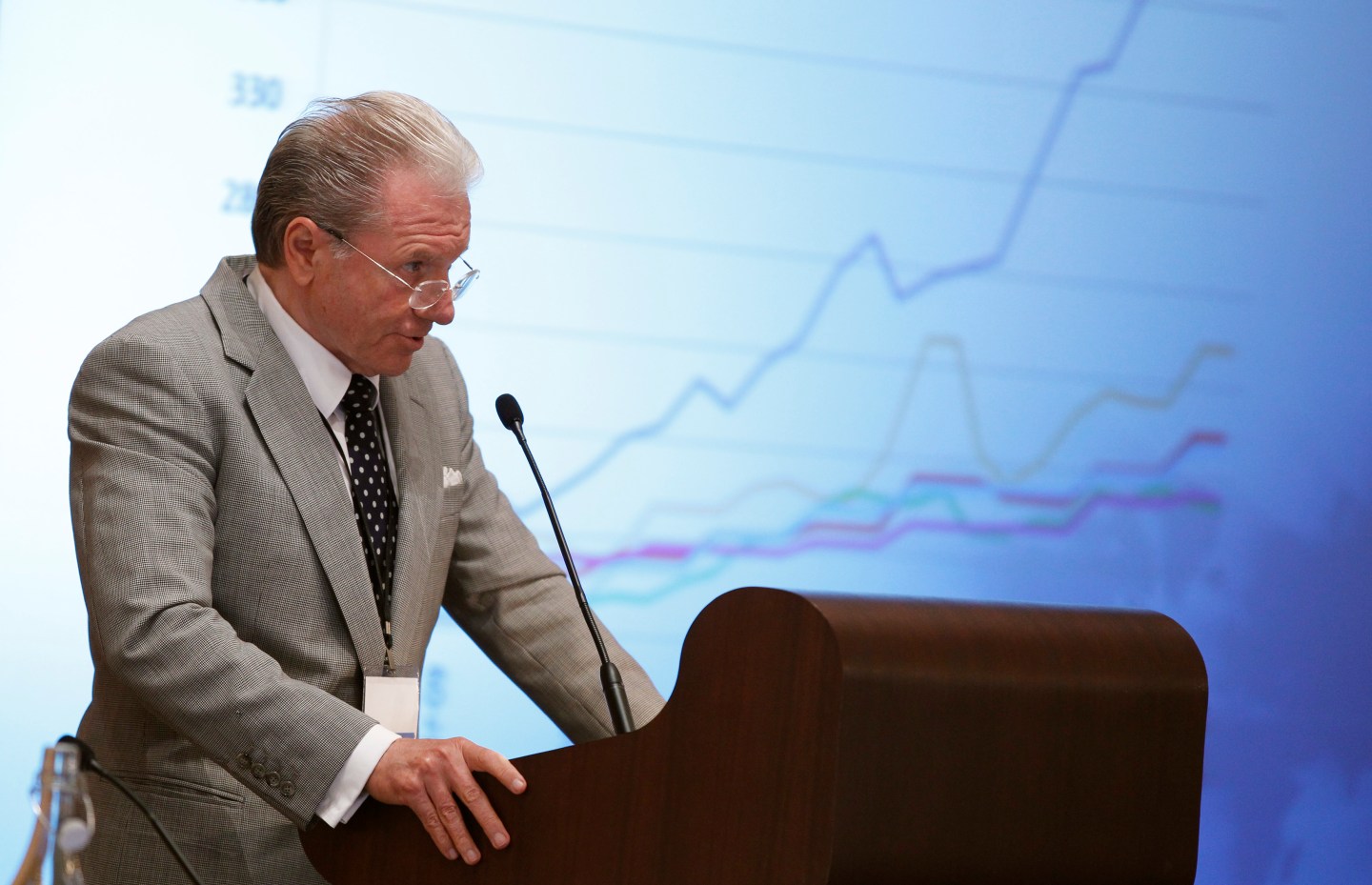 Thomas Peterffy, founder and CEO of Interactive Brokers Group, which said it had $120 million in customer losses in bad currency bets on Thursday.
Photograph by Lucas Jackson — Reuters

In an unfortunate twist of fate, it looks like a lot of Interactive Brokers’ clients have joined the poor house. On Friday, the online trading firm, which allows individuals to place bets on currency moves and other investments, announced that “several” of its clients’ accounts had been completely wiped out by the jump in the Swiss franc on Thursday, creating huge losses for anyone betting against the currency. Betting that the Swiss franc would fall had become a popular bet that was considered safe. This week’s events have left the firm on the hook for $120 million in losses.

And Interactive Brokers’s clients weren’t even the worst hit. FXCM, the U.S.’s largest online brokerage for retail foreign currency trading, said many of its clients had been wiped out in the markets on Thursday as well. The firm said it was owed $225 million by clients who had lost everything in this week’s volatile currency markets. Both Interactive and FXCM focused on individual investors. U.K. brokerage IG Group said it had nearly $50 million in losses but that the firm’s financial condition remained “extremely robust.” Another retail broker in the U.K. Alpari said it was insolvent.

In the past few years, in the wake of the 2008 market crash, a growing number of individual investors have jumped into currency trading under the impression that it was a safer bet than stocks. On Thursday, when the euro, the dollar, and other currencies fell nearly 20% in one day versus the Swiss Franc, those investors learned just how wrong they were.

In January 2014, Citigroup released a report documenting the rising popularity of investing in currencies among individual investors, often called forex or FX trading, for foreign exchange. The Citi report said that the average daily volume of retail trading in one large FX market had doubled to 20% of the total market in 2012, or $400 billion in trades, from just over 10% in 2008.

The report estimated that the growing horde of retail FX traders, which it estimated at 4 million, were mostly male at an average age of 35. And most were small-time players. The average individual who was trading currencies in the U.S. had just $6,600 in their account.

But most believed their accounts were set to grow. The report cited a recent poll that had found that 84% of retail traders in the FX market believed they could make money during most months. In truth, the report said, only about 30% of individual investors make money trading currencies.

FXCM (FXCM) was one of the fastest growing firms that catered to individual investors interested in the currency market. In fact, Barron’s had referred to the firm as a “fast growing money machine.” The firm handled $1.4 trillion in trades by individuals in the last quarter, and had become the biggest online currency brokerage for retail investors, with over 230,000 accounts at the end of last year.

FXCM never promised its clients riches, but, at times, the company and its CEO appeared to play down the risks of swapping the Swiss Franc, say, for Polish Zlotys. In May 2013, FXCM’s CEO Drew Niv, who co-founded the company in 1999, told Bloomberg TV that currencies were no more risky than stocks or other assets. And FXCM ran a website DailyFX that sought to teach individuals how to make money in the currency market. A tab on the top of its website is titled “DailyFX for Beginners.” On Friday, there was no mention on the website of FXCM’s huge losses.

In December, Niv told Bloomberg Market’s magazine that leverage and the ability to trade more money than investors had on hand had drawn a lot of interest in the currency market from retail investors. “Currencies don’t move that much,” he told Bloomberg Markets. “So if you had no leverage, nobody would trade.”

Most of the clients that traded with FXCM lost money. Nearly 70% of FXCM’s client accounts lost money in 2014, according to a disclosure the company made with the CFTC. In 2013, FXCM paid Niv nearly $1.5 million in salary and non-stock incentive bonuses. Now, the company looks to be on the brink of failing. FXCM’s stock, which had been trading at around $11 on Wednesday evening, plunged 92% into the pennies in pre-market trading on Friday morning. The SEC halted trading in the stock, and it never opened on Friday. On Friday, FXCM secured $300 million in financing from Leucadia National to keep the currency trading firm afloat. “We are pleased to continue to act as the leading online provider of foreign exchange trading and related services to retail and institutional customers worldwide,” Niv said in an official statement from FXCM.

Interactive Brokers (IBKR) had also drawn many individual investors into the currency market. It was known for its often funny, and at times controversial, commercials. In 2012, Interactive Brokers’ founder, the Hungary native Thomas Peterffy, spent $8 million on ads urging people to vote Republican. In the ad, Peterffy said, “I grew up in a socialist country, and I have seen what that does to people.” On Friday, Interactive Brokers said the $120 million in client losses that it might have to cover amounted to less than 3% of the company’s assets. By late Friday, its shares were down by 1% to just under $28. Interactive Brokers did not immediately respond to a request for comment from Fortune.

The turmoil caused by Swiss Franc this week did deliver a few winners. Gain Capital, a Bedminster, N.J.-based currency brokerage firm, said that it made money on Thursday. Two years ago, FXCM had offered $210 million to buy Gain. Gain’s leadership rejected the bid. In retrospect, it looks like that was a very good move.

Correction: An earlier version of this story said that the IG Group was shutting down because of its customers’ losses. In fact, the company said its financial position remained “robust.”