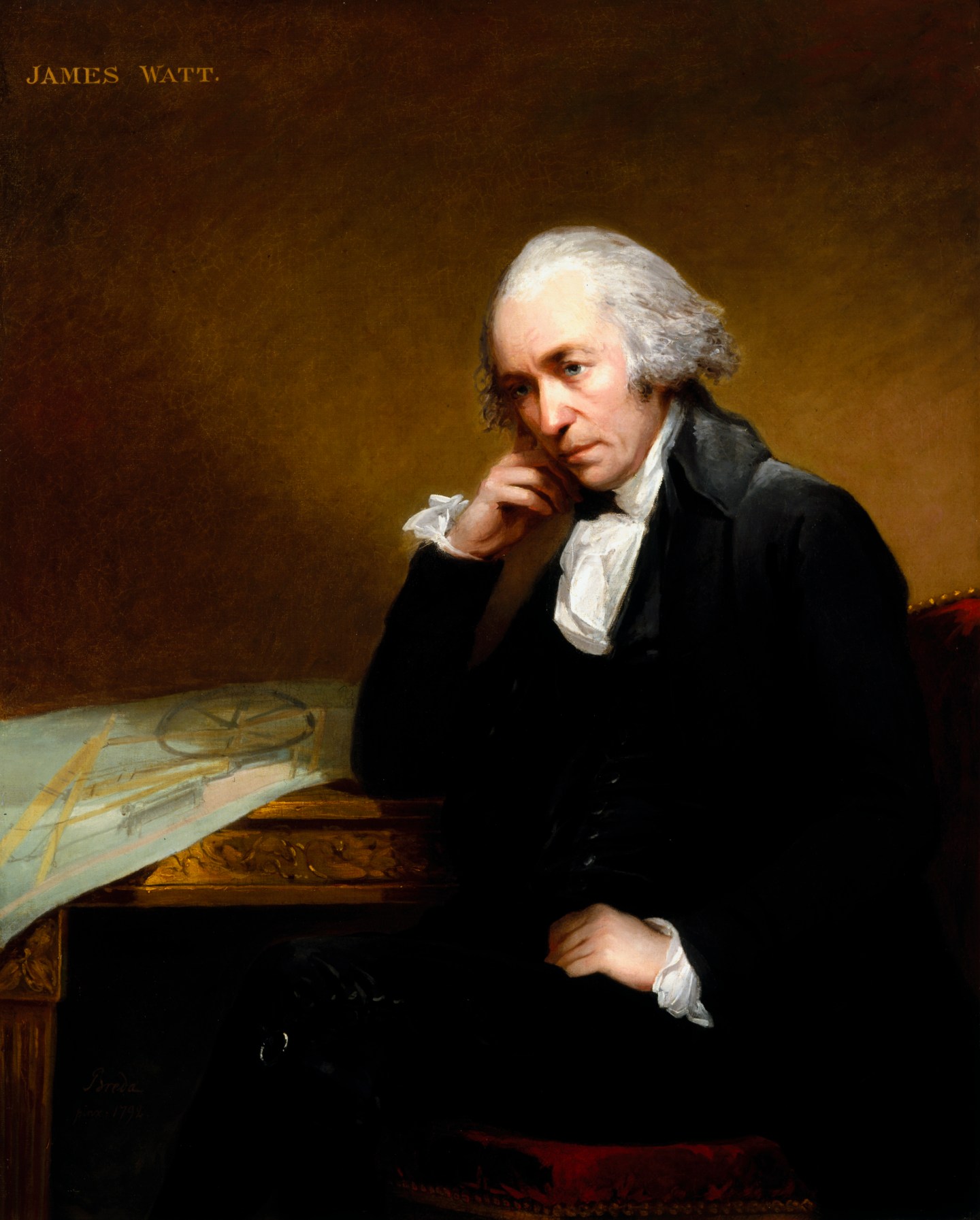 UNITED KINGDOM - APRIL 11: Oil painting by Carl Fredrik von Breda of James Watt (1736-1819), the inventor of the improved steam engine and perhaps the greatest of British engineers. This is one of three known versions of an oil painting produced by von Breda on a visit to Boulton and Watt in Birmingham in 1792. It is the earliest known portrait of Watt, and was probably commissioned by the engineer, John Rennie (1761-1821). The drawing on the table behind Watt is of a rotative beam engine with a 1788 condenser and a wooden frame similar to that used by Rennie in 1792. Watt gave his name to the SI (international standard) unit of power, the watt (W). (Photo by SSPL/Getty Images)
Photograph by SSPL via Getty Images

When independent inventor James Watt introduced his improved steam engine in 1788, he catalyzed the industrial revolution in the United Kingdom, and around the world. What few know is that Watt’s “flash of genius” came in 1765, but he lost almost a decade seeking investors while making ends meet as a surveyor, unable to work full-time perfecting his invention. When investors did arrive, they required he seek patent protection. Imagine if the starting date of the productivity gains and capital generated in the industrial revolution – and the technological progress we’ve achieved since – had begun a decade earlier? The additional accumulated value in monetary and human terms would be immense.

Watt’s story carries lessons as applicable today as they were 250 years ago. Invention can come from anywhere. Innovation – the process of guiding invention to successful commercialization – requires investments of time and capital. And often, such investments won’t be made without the profit incentive provided by early and effective patent protection.

Since great ideas are fundamental to economic and human progress, and because they can come from anywhere, lowering barriers to access for the patent system (a critical enabler for translating inventions into innovations) is in everyone’s interest. The U.S. patent system has always aimed at providing more early-stage access by setting patent filing fees cheap, and recently even cheaper for the neediest, a policy that differs markedly from many countries where expensive fees and fragmented patent systems impose high transaction costs on inventors. And as technology and law become more complex, inventors are forced to use lawyers to prepare patent applications, which in turn creates a patent system inaccessible to many worthy inventors. Does that delay the arrival of great inventions, or worse, prevent them from reaching the market altogether?

The result is missed opportunity across the board, especially for under-resourced inventors with great new ideas. And these are just the people who produce some of the best, most practical inventions. Stan Ovshinsky, a kid from Akron, Ohio with no formal education, modeled his first mechanical invention in an old barn in 1947. Then, working out of a small Detroit storefront, he integrated elements of neurophysiology and cybernetics to invent a mechanical model of a nerve cell, leading to fundamental patented inventions in nanotechnology and amorphous materials. His subsequent patents in information and energy technologies continue to spin off industrial applications in semiconductors, liquid-crystal displays, and batteries integrated into laptops and hybrid electric vehicles.

Business has a strong interest in the success of the Stan Ovshinskys of the world. In the modern era of Open Innovation as described by Henry Chesbrough, profitable ideas are increasingly arriving from outside company boundaries. The external environment provides a rich source of opportunities.

Business prospers when inventors can specialize in inventing, and generate a steady supply of great ideas for companies to license-in or acquire. And unless there is good intellectual property protection available early on, the inventors have less incentive, less confidence, and less wherewithal to invent and pursue their inventions to completion. Companies suffer too, since they will have fewer opportunities to turn those inventions into new products and services in the marketplace (lower supply), and no patent protection in the later stages to secure corporate profits (less investment incentive).

The U.S. has taken a step in the right direction. A network of state groups, coordinated by the federal government and spurred on by President Obama, are addressing this issue through the Patent Pro Bono Program.

The U.S. Patent & Trademark Office (USPTO) began working with local lawyers’ associations and non-profit groups in 2011 as a result of the Leahy-Smith America Invents Act to provide free legal assistance to under-resourced inventors seeking patent protection for their inventions. Under this initiative, many regional Patent Pro Bono programs have developed across the U.S., each administered by a non-profit entity responsible for screening and referrals to licensed patent attorneys.

The Patent Pro Bono Program showcases American ingenuity at its best – leveraging an immense reserve of legal talent in an arbitrage that brings needed skills to those who can’t otherwise access them, to serve inventors, innovation and economic growth. Will every invention pay off? No, but that’s the nature of invention: The value distribution is very skew, with a few hits generating the largest returns.

But because uncertainty is unavoidable at the outset regarding which inventions will ultimately prove valuable, and because patenting must be started early to be effective, it is important that we offer an accessible patenting option for those who need it, at the earliest stage.

Economists have recently shown that in many countries, intangibles account for over 50% of total business asset value being generated. Business and society alike benefit from a greater supply of inventions from more highly diverse sources. In an era where we need all the innovation we can get, and where every new innovation is cause for celebration regardless of its source, the USPTO’s Patent Pro Bono program shines light on the good that can come from partnerships between the private and public sector in service of the little guy with a big idea.

David J. Kappos is a partner at New York City-based law firm, Cravath, Swaine & Moore, where he supports the firm’s clients with a wide range of intellectual property issues. From August 2009 to January 2013, Kappos served as director of the U.S. Patent and Trademark Office. Stuart Graham is a professor at Georgia Tech and former Chief Economist at the U.S. Patent and Trademark Office.