An Internet to love and hate 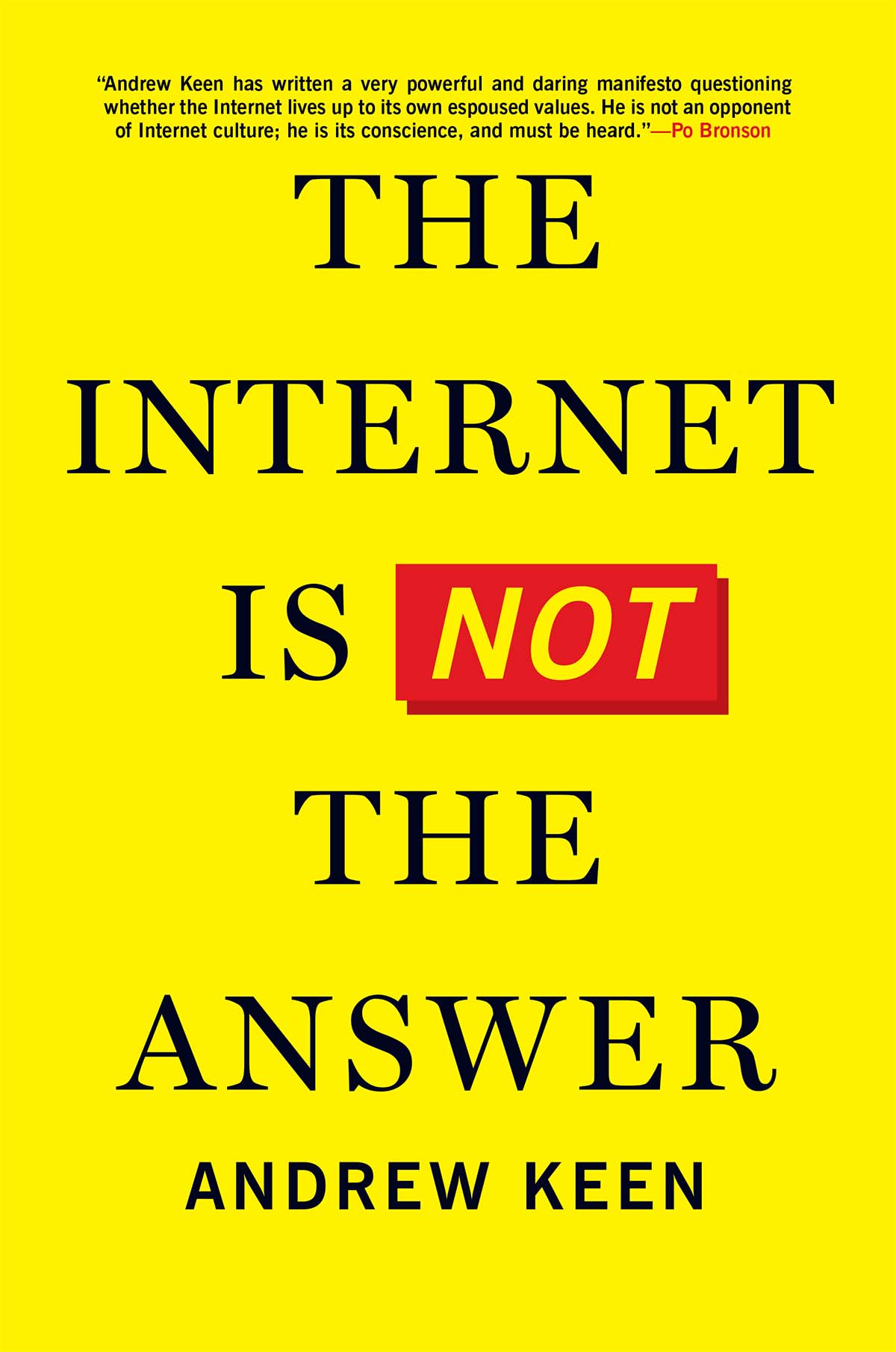 The Internet Is Not the Answer, by Andrew Keen book cover
Courtesy: Atlantic Monthly Press

The rise of the Internet promised great upside for billions of people around the world: enhanced global communication, the spread of democracy, and a new wave of innovation. A new book suggests the reality is starkly different.

The Internet Is Not the Answer (Atlantic Monthly Press; $25), by web commentator and entrepreneur Andrew Keen, argues that the “economic and cultural win for its billions of users” was a mirage. According to Keen, who founded Audiocafe.com in 1995 and turned that experience into a career on the tech-industry speaking circuit, the Internet’s benefits have accrued mostly to a “tiny group of young white men in black limousines,” leaving everyone else worse off. Sure, software may be eating the world, as investor Marc Andreessen so aptly described it in 2011, but it is also “ravenously consuming our jobs,” Keen writes, leading to a “structural unemployment crisis” that is making most people poorer and producing widening inequality.

Keen cites Amazon as a prime example of a company that makes us worse off in myriad ways. The Jeff Bezos-led retailer has destroyed bookstores and put people out of work, Keen argues. It’s a despotic monopolist. It subjugates its workers.

But his case against Amazon is weak. Amazon (AMZN) surely hastened the downfall of brick-and-mortar booksellers even as it professed to embrace the culture around them. But their demise is the result of forces much larger than the company—a secular trend of bits replacing atoms, much like the shift in music distribution that annihilated the compact disc.

Keen points out that Amazon’s ruthless appetite for supply-chain efficiencies has led to the replacement of high-paying, unionized jobs with fewer, lower-paying roles. This is an important socioeconomic issue—but is it really the Internet’s fault? Are Walmart or Nike any different?

In making his argument, Keen conveniently ignores the other side of the ledger of the ascendant Internet: the proliferation of better products and services at lower costs that improve living standards. The rise of digital books allows millions of titles to see far broader distribution by offering instantaneous access and lower prices to consumers. The rise of smartphones with built-in cameras as well as photo-sharing services like Instagram may have accelerated Kodak’s demise, but it also lowered the barrier to photography for millions of people by making it free, easy, and always within reach. In every category, disruption brings massive consumer benefits.

And what of the inequality that the Internet has wrought? Keen fails to address potential ways that it might be addressed, such as through education, retraining, greater mobility, and appropriate safety nets. He does not consider the potential for technological innovation to reduce inequality, such as by lowering the costs of health care and education or by making opportunities more broadly available. Instead, he obsesses over The Battery, a San Francisco restaurant and social club frequented by successful Internet entrepreneurs, and the multibillion-dollar cash reserves of companies like Apple and Google, which Keen implausibly argues “puts the fate of the world economy in the hands of the few” rich technology companies. On-demand car services such as Uber and Lyft mostly serve the rich; never mind that they create additional opportunities for people to earn a living by massively expanding the market.

There is much of interest in The Internet Is Not the Answer, but its author too easily descends into tangential class warfare, bland assertions, and fuzzy logic.

Keen says we are all “working for Facebook and Google for free, manufacturing the very personal data that makes their companies so valuable.” He means to say that our attention and information allows those companies to better sell advertising on their free services, but the way he frames the argument is akin to saying that we are all working for the TV networks, generously donating our time to watch American Idol so that Fox can sell automobile advertising. There’s certainly a relationship there, but Keen avoids acknowledging the mutual benefits.

The rise of the Internet has not been all beer and skittles, and Keen is adept at illustrating it. Often, he’s right—and the result may be eye-opening for anyone who considers the Internet a panacea. For everyone else, though, The Internet Is Not the Answer will provide few revelations but plenty of provocation about the distribution of the bounties of the digital revolution.