2014: The year that nothing worked 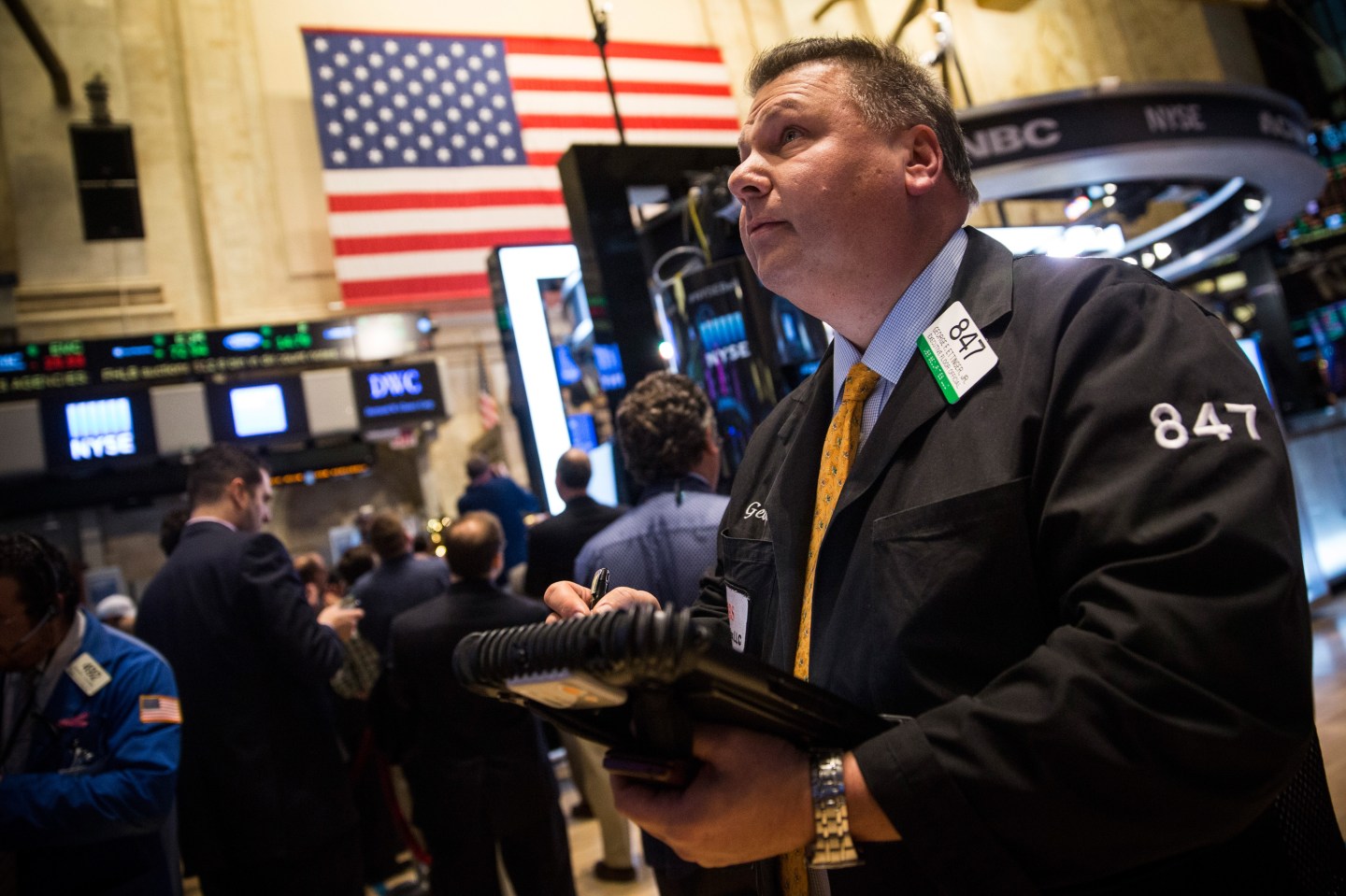 NEW YORK, NY - DECEMBER 18: Traders work on the floor of the New York Stock Exchange during the afternoon of December 18, 2014 in New York City. The stock market had its best day of 2014, with the Dow Jones Industrial Average rising over 400 points after the Federal Reserve signaled that it would not raise interest rates. (Photo by Andrew Burton/Getty Images)
Photograph by Andrew Burton — Getty Images

As we get closer to relegating 2014 to the history books, your local stock market guru most likely couldn’t be happier to see those books slammed shut.

It’s been one of the worst years for investment decision-making on record, almost across the board. No strategy worked consistently, save for the type of shareholder activism that only a handful of Wall Street’s billionaire titans are able to engage in.

For almost everyone else, it was a year of frustration against a backdrop of better-than-average returns for the most popular index in the land.

With a bit of help from Charles Dickens, let’s take a look back at the year in which almost nothing worked:

The S&P 500’s total return of 14% this year was 40% higher than its 25-year average annual gain. Wall Street’s chief strategists spent much of the last 12 months revising their targets higher from behind. The index printed over 50 all-time record closes, with nearly all investment management professionals racing to at least pull even. A few characteristics made the U.S. stock market particularly difficult to keep up with this year.

An odd assortment of S&P sectors led the market higher this year, with some strange bedfellows atop the leaderboard. Even if a manager had foreseen that the healthcare sector would gain 27% this year, would they have guessed that utilities would be in the No. 2 slot, with gains of 23%? Unlikely.

Given that every single Wall Street economist had called for higher rates at the start of this year and 67 of 67 economists surveyed by Bloomberg concurred, the rate-sensitive utilities industry would have been the last sector a rational person would want to overweight. Bets on the financial sector were slow to pay off while wagers on “cheap” energy stocks demolished portfolio performance in the third and fourth quarters, just as they had elevated it during the first and second.

Rounding out the top-performing sectors of 2014 was an unlikely pair: tech (+16%) and consumer staples (+13.2%)—the most aggressive and most defensive areas of the market, running side-by-side toward the finish line, with confounded spectators struggling to concoct a narrative for this. Why would the least cyclical sectors—healthcare, staples and utilities—lead the markets in a year in which unemployment plummeted and GDP growth gained momentum? Much to the chagrin of the pundit class, sometimes there are no satisfying answers. To quote Kurt Vonnegut:

If you thought that getting sector over- and under-weights correct at the outset proved difficult, switching between them throughout the year was nearly impossible. A quantitative analyst from Nomura Securities explained to Barron’s in November that “industry leadership has been reversing from month-to-month at a rate unseen in decades of stock-market history. ‘Even if you’re picking the right stocks in a sector,’ he says, ‘things are moving around so much that your performance doesn’t persist.’”

Getting sector calls right was the least of any investor’s problems this year because, outside of the brilliance of U.S. stock gains, the lights were off around the world.

With both the S&P 500 and Nasdaq returning over 14% while the Dow and MidCap 400 each kicking in close to 10%, you would assume that passive investors would have an awful lot to celebrate this year. And indeed, they would have, if it weren’t for those pesky overseas stocks that did nothing but drag on the performance of any diversified portfolio.

With the majority of professional advisors (myself included) preaching the benefits of global diversification to their clients, 2014 looks more like a draw than an outright victory in the harsh light of December’s low winter sun. Consider the fact that, through last week, the MSCI World Index gained just 2% on the year, with nearly 5% drops for both the MSCI Emerging Markets index and the EAFE index of developed markets outside of the United States. Ironically, the single best-performing foreign market in the world, the Shanghai Composite of mainland Chinese equities (up 45%) is the only one that U.S. investors could not actually put their money into.

Over 10- and 20-year stretches, geographic and asset class diversification have proven beneficial for returns and risk management. Unfortunately, you are not guaranteed to see the benefits of such a strategy during any 12-month period. In an era of 140-character writing and two-minute video, should we be surprised that investors have trouble judging the success of their portfolios over long periods?

It was the spring of hope, it was the winter of despair…

One of the most discouraging aspects of 2014 for professional investors has been the start-and-stop nature of the recovery. We coasted into January on a trend of strengthening economic reports. Within a few weeks, a nationwide snowstorm seemingly drove the economic data off the side of the road.

Market watchers were forced to digest the reality of negative 2.9% GDP for the first quarter of the year. All of a sudden, everyone’s forecasts seemed too rosy—or at least too smooth—compared to the lumpy reality. This led to a raft of second-guessing on the timing of the Fed’s eventual exit from its bond-buying stimulus program. We went from confidence to WTF? in a space of a few weeks, with all the asset class rotations and market corrections that come along with a fresh bout of uncertainty.

Despite the fact that each market rebound ended up as a V-shaped affair, each successive rally was carried out with less and less individual stock participation. Glaring divergences between winners and losers, large caps and small caps, preoccupied the commentariat for most of the spring and summer. Deflationary concerns from Europe and the Japanese technical recession further confounded analysts, as Treasury yields and inflation indicators in the U.S. were driven lower despite the improving domestic economy.

Put succinctly, there was no way to describe or explain the crosscurrents of 2014. And I’m not convinced that the benefit of hindsight will make what happened this year any clearer years from now.

While the S&P 500 is on track to conclude another stellar year of gains, those who sought to beat the index are poised to finish with a more dubious distinction. According to Lipper, 85% of all active stock mutual fund managers had been trailing their benchmarks through the end of November. In a typical year, there are nearly twice as many managers outperforming, with only around two thirds of funds struggling to catch up. Lipper says this is the worst year for active managers relative to the market in three decades.

Stock pickers encountered difficulty this year in part because of concentration at the top of the market. Just five stocks—Apple, Berkshire Hathaway, Johnson & Johnson, Microsoft, and Intel— accounted for 20% of the market’s gains. If you weren’t at least equally weighted toward them, you had virtually no shot at making up for missing their enormous, index-driving gains. A majority of the market’s stocks did not perform nearly as well. According to the Leuthold Group, only 30% of S&P 1500 stocks posted gains exceeding the index itself. You’d have to go back to 1999 to see anything like this.

Fund shareholders weren’t wasting any time reacting to this year of disappointment. Collectively, they’ve added just $35 billion to active stock-picking funds in the last 11 months, less than a quarter of the $162 billion they added in 2013, which was the first year of positive flows for the industry since 2007. This is not to say that they were sitting still. ETFs and passive index funds took in over $206 billion in net deposits through Thanksgiving, and Vanguard surpassed the $3 trillion mark sometime in late summer. Investors seem to have decided that they’d rather bet on the horses than the jockeys, after all.

The malaise was not confined to those picking individual stock winners. Through December 1, aggregate hedge fund returns trailed the market to the point of farce. According to data compiled by Bloomberg, hedge funds were up an average of 2% on the year, just barely offering the coupon rate of a risk-free 10-year Treasury note. Over 1,000 funds are on track to close down in 2014, the worst year for liquidations since 2009.

Among the gargantuan hedge funds that make up a majority of the industry’s assets under management, dispersion of returns shot up to notable levels. And for every big winner, like William Ackman’s Pershing Square, there was a big loser to counterbalance it, like John Paulson’s Advantage Fund. Investors choose hedge funds for their “non-correlated returns,” meaning a tendency to move opposite from the general market’s direction. They certainly got such returns this year, unfortunately.

Financial advisors and asset allocators who had been hoping to see some benefit this year from tactical strategies were also not spared the punishment of a capricious market. Of the top three tactical strategies in the country (Mainstay Marketfield, Good Harbor U.S. Tactical Core, F-Squared Premium AlphaSector Index), two had nearly imploded with double-digit losses while the third found itself under SEC investigation for misleading the public about its historical returns. The other giant tactical manager, Schwab’s $9 billion Windhaven Diversified Growth product, looks to end 2014 with a return close to zero. So much for tactics.

In short, the period was so far like the present period, that some of its noisiest authorities insisted on its being received, for good or for evil, in the superlative degree of comparison only.

When Dickens wrote about the French Revolution in A Tale of Two Cities, he did it with nearly a century of hindsight. Here, at the end of December, I don’t enjoy that luxury. As such, some of the trends I’ve written here are likely to remain in force for the foreseeable future, while others may have already begun to fade. As one of this period’s “noisiest authorities,” I insist only on your receiving this review with just one caveat in mind: Past performance does not guarantee future results.

I’ll see you next year.