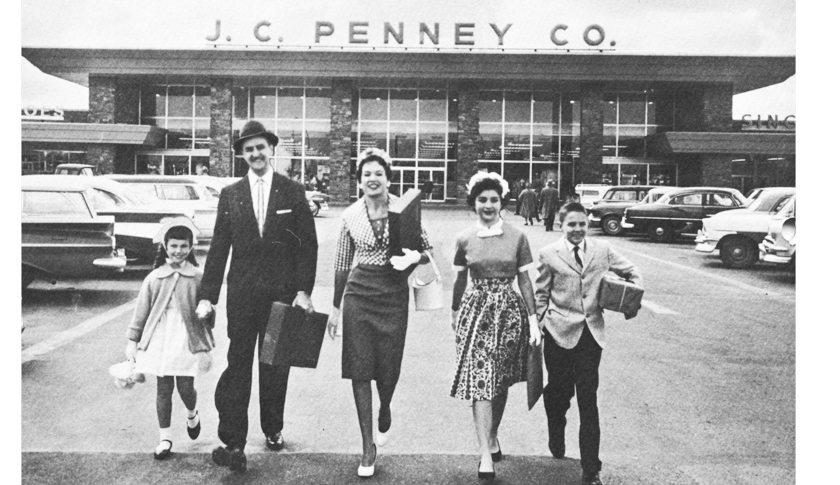 J.C. Penney (JCP) has long generated about half of its revenue from its own in-house brands, which range from Liz Claiborne to St. John’s Bay to Arizona jeans, among many others. Such brands are typically more profitable for Penney than brands consumers can find at many other retailers, and are a useful way to get shoppers into stores since they are exclusive to Penney.

Penney has been doing this for a long time. In fact, the department store launched its first private brand 100 years ago this year, with the Marathon Hats collection. James Cash Penney, who founded the company in Wyoming in 1902, started his own brands because some suppliers wouldn’t sell to him products of the quality he wanted.

Penney CEO Mike Ullman has made it clear that private brands would be front and center in the department store chain’s growth plans (for more, see the related story on Penney’s private label business). In fact, one of the cornerstones of his strategy when he returned to rescue Penney in April 2013 was to bring back private brands beloved of loyal customers, such as JCPenney Home and Cooks kitchenware, that the company had dumped during Ron Johnson’s misguided attempt to modernize the chain.

Here is a look at some classic J.C. Penney brands of the last 100 years.

This is how it all started: a line of elegant fedoras that was the first of what would become many in-house brands for Penney, launched a century ago this year.

Look at these big work shirts from this 1928 ad, touting big armholes and sparse yarn chambray, starting at 69 cents. Penney was already boasting about how its big purchasing power with suppliers made it possible to offer such low prices. And  well before Johnson launched the jcp clothing brand in 2012, there were 49-cent J.C.P. Co men's shirts (bottom right.)

94 1/2-inch sheets for only $1.33, and pillow cases for 32 cents? What a steal. The Penco sheets were made specifically for Penney by cotton mills in New England, and available only at Penney's 1,400 stores. (This was way before the big box at a mall concept—Penney now has 1,060 department stores.) Notice how the ad boasts that Penney drew 5 million women customers. This was a precursor to how much emphasis Penney would later put on home goods, centered on its JCPenney Home brand.

Admit it guys, you want one. Check out Penney's Waverly caps for men, showcased in this 1930 ad. Penney claimed in the ad that 500,000 American men bought their caps from the retailer. Even at $1.98, it was still probably a bit of an indulgence at the height of the Great Depression.

Not sure if in 2014 we'd see a company brag that its plaid sport shirts had Celanese Celaperm color-sealed acetate. But it was 1958. And the shirts, at $2.98, were sensibly priced and a forebear of its St. John's Bay clothing for men. (See bottom of this list.)

Check out Penney's early 1980's efforts to push back at Lacoste, famed for its alligator logo. (Who can forget the 'save an alligator, kill a preppie' slogan from that era?) There is clearly a lot of nostalgia for this discontinued brand—a vintage Fox cardigan was priced at $36.99 on eBay this past weekend, while a 'mod, hipster windbreaker' was going for $45.

Launched in 1985, the Worthington brand was Penney's foray into work clothing for the professional woman like Staten Island secretary Tess McGill, played by Melanie Griffith in the 1988 movie Working Girl. Penney's ad says the clothes aim to be memorable without being shocking. But why no shoulder pads?

And to give you a sense of how the Worthington brand has evolved since the 1980s, here's a piece from its 2014 look.

What else would a woman wear to look stylish but comfortable strolling through Central Park nearly a quarter century ago? Hunt Club was designed to be a broad collection of classic sportswear, and was a fixture for decades. But in 2001, Penney tried to update the brand and re-invent it as a lifestyle brand and make it higher-end. That failed, and the brand eventually disappeared.

St. John's Bay is Penney's only billion-dollar brand, and here is it in its current incarnation. (Arizona jeans at one point hit that threshold, but slipped back under as Penney's sales plummeted in 2012-13.) Johnson dumped the women's line in 2012, hoping to replace it with hipper names like Joe Fresh, Betseyville and a new brand, JCP. But Penney's loyal fans stayed away in droves as a result and made it clear to the company they wanted the brand back. Ullman obliged in one of his first moves in April 2013, when he returned as CEO to rescue Penney.