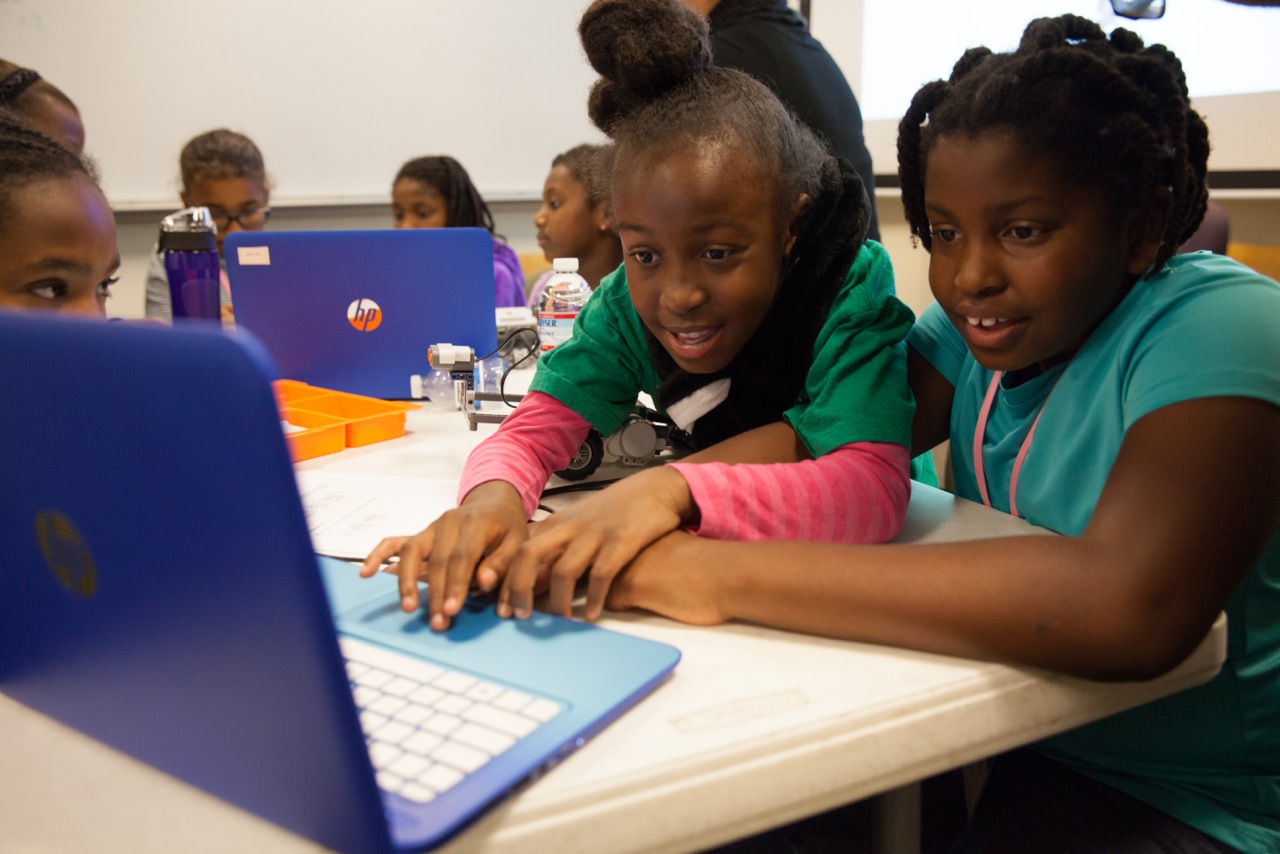 In a classroom at UC Berkeley, Jasmine, Alexandria and Alana bent over a table covered in gears and pulleys while they tinkered with a robot they’re building. But there was a problem: Their little grey rover with thick black rubber wheels rolls across the floor, but it moves backwards instead of forwards.

“The program is looping,” Alana said. “We gotta reprogram it.”

Alana Alexander is 11, and her teammates are 10. They spent their Saturday at a robot expo organized by Black Girls Code, a non-profit organization that helps to teach girls of color about technology.

Kimberly Bryant, a former engineer who has worked at Novartis and DuPont, started the program in 2011 after searching for after school science and technology programs for her daughter. She couldn’t find anything specifically for girls of color, so she started Black Girls Code.

“Our numbers are the lowest,” Byrant said about African-Americans in technical fields. “I know from experience how isolating it can be. Here, they can be vulnerable and learn in a safe environment as opposed to being somewhere where you feel intimidated or like an imposter.”

Black Girls Code is among a handful of groups trying to counter the bleak reality for women of color in tech. The industry is largely made up of white and Asian males, with otherwise little diversity.

Black women account for only 3% of the U.S. tech workforce, for example. Meanwhile, Asian women make up 4% while Latinas are a paltry 1%, according to a 2012 report by the Center for Women in Information Technology. More troubling is that the skewed demographics are unlikely to change anytime soon. Only 4.5% of computer science majors are black, while just 14.5% are women, according to a 2013 survey by the Computing Research Association.

This lack of diversity is Silicon Valley’s loss, points out Elizabeth Ames, a vice president at the Anita Borg Institute, a non-profit dedicated to advancing women in technology. “One of the major challenges is for Silicon Valley to develop diverse role models and reach out to the community in ways that build bridges within the pipeline of future talent,” she says.

Social activist, Rev. Jessie Jackson, notes events like Black Girls Code are important because they provide a safe space for school children. “People need a comfort zone where they can learn,” he said, citing his own childhood where one teacher had used geometry to intimidate him, and another to inspire him.

In three years, Black Girls Code has grown from a pilot with a dozen students to an organization with chapters in seven U.S. cities, and one in Johannesburg, South Africa. The Robot Expo sold-out before Black Girls Code could do any outreach to schools.

In Berkeley recently, nearly 200 girls rotated through classes that were a big contrast to their usual school curriculum. They learned about building a circuit with Play-Doh to make an LED light up, snapped together machines made of Legos that could be hooked up to motors, and assembled robots that could wheel across the floor on their own steam.

The kids worked together in small groups, quickly making friends with their team mates. Come afternoon, they showed off their finished robots and attended a robot demonstration by Erika Bergman, who pilots submersible robots equipped with video cameras in all corners of the world. The girls cheered madly when Bergman told them about one such camera placed in a shark’s mouth.

Jordana Henry, a high school English teacher who brought her 13-year-old daughter, Sabria, to the event, said the hour and forty minute drive from her home in far away Monterey was absolutely worth it. There aren’t many activities for black children in her neighborhood, and even fewer of them are educational.

“I know what it’s like to be the only black girl in honors classes,” Henry said before grading papers while her daughter rotated through classes. “The only reason why I didn’t think I was the only one was because I went to a historically black university. I want my daughter to know she’s not the only one.”

Some of the girls were effusive about spending a weekend in class. “The only thing that sucks is you can’t take the robot home,” Alana said while futzing with her robot to make it move forward. Others would rather have their Saturday back. Thirteen-year-old Mya William has been to several Black Girls Code events before and this one feels like a repeat to her. “Some are fun, others are boring,” she said. “You have to really, really be into tech to like everything.”

What they do agree on is that it’s easier to work without boys around. “At school the boys always yell,” said 11-year-old Sydney Bruce. “If the boys were all sent home, we’d get more work done.” Her partner, 11-year-old Janelle Mondesir, agreed, saying that the boys at her school got more attention from the teachers because they were more vocal.

As for being surrounded by other girls of color? Sydney liked that she’s making new friends that she wouldn’t otherwise meet at school. Then Sabria, 13, whose mother drove her an hour and forty minutes to get here today, spoke up.

Her private school doesn’t cover computer science, so she enjoyed the opportunity to learn new skills. Sabria’s schoolmates are mostly white, and as she talked about being the only black girl, her fellow group member, 11-year-old Danielle Ganter, who attends a different school, nodded along in solidarity. “I have like two black friends,” Danielle said.

“Once at school, I kept tally marks of how many racist jokes I heard on my hand,” Sabria said. “I heard 39. Today, I haven’t heard one.”

Danielle nodded and sighed, hinting at having been there, done that far too many times to count.

“People are idiots,” she said. Then she and Sabria got back to work. They had a circuit to build.