Attention Tesla drivers: now you can swap your battery in California 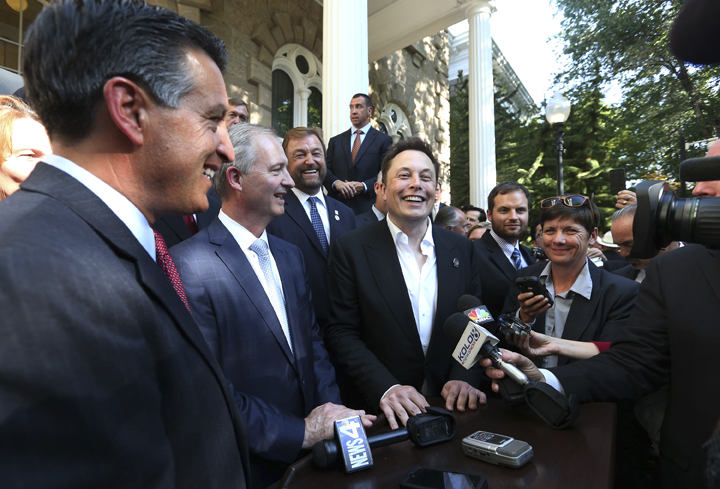 From left, Nevada Gov. Brian Sandoval, Steve Hill, executive director of the Governor's office of economic development, and Telsa Motors CEO Elon Musk answer questions following a news conference at the Capitol, in Carson City, Nev., on Thursday, Sept. 4, 2014. Nevada Gov. Brian Sandoval announced Thursday that Tesla Motors will build a massive battery factory in the state as long as legislators approve tax breaks and other incentives worth up to $1.3 billion over 20 years. (AP Photo/Cathleen Allison)
Photograph by Cathleen Allison—AP

If you’re driving from Los Angeles to San Francisco in a Tesla, you can now deal with a drained battery faster than it would take you to fill up the gas tank of a traditional car.

So how exactly does this work? According a video produced by Tesla (TSLA), a battery pack swap area will be at Tesla’s stations found between Los Angeles and San Francisco. A person who pulls in can either use the supercharger to recharge the battery in their car — which is free — or pay to have their battery swapped out, which will cost money but be faster. Telsa hasn’t announced a price for the battery swap feature.

“The only decision you need to make when you come to one of our Tesla stations is do you prefer faster or free?” Musk said.

The battery replacement is done by machines similar to the ones used in the Tesla factory. On average, Telsa’s batteries last for about 350 miles per charge, if a car was traveling at 55 miles per hour. The driving distance between Los Angeles and San Francisco is a little over 380 miles — so a Tesla driver would need to recharge at least once on the journey.

It hasn’t been announced yet how many stations in California will have battery swap machines, or when the program could be expanded.