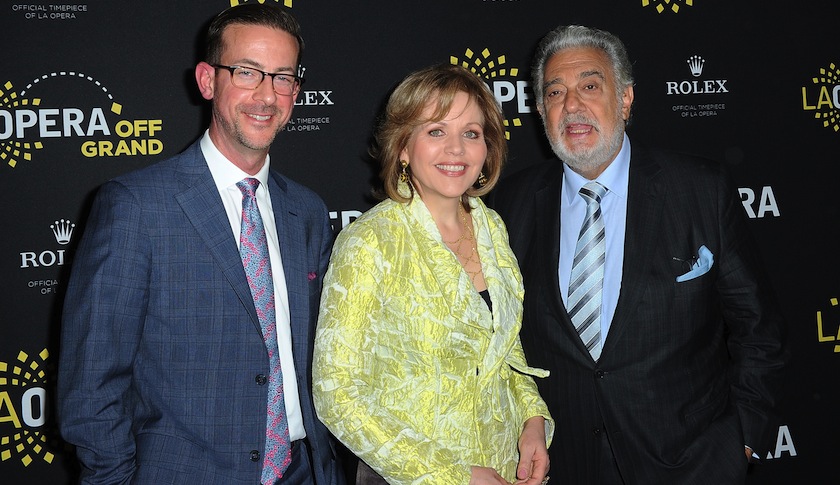 attends the Renee Fleming And Placido Domingo Q&A at the Dorothy Chandler Pavilion on May 15, 2014 in Los Angeles, California.
Photograph by Joshua Blanchard—Getty Images

To many, Los Angeles conjures visions of movie studio lots, real, aspiring, and poseur celebrities, and sun-baked, congested roads. What doesn’t come to mind? Opera, or classical performance art of any kind. After all, LA is the land of pop. But the city of angels has its very own hometown opera company. LA Opera launched its 29th season in September. By opera standards, the company is quite young. (The Met in New York was founded in 1880 and put on its first official season in 1883.) But with an annual budget that exceeds $40 million and opera great Placido Domingo as its general director, don’t be fooled by its relative youth; LA Opera is a force to be reckoned with. Fortune spoke with Christopher Koelsch, 42, LA Opera’s president and CEO, about the strengths and liabilities of the company’s youth, how the organization made its way through the financial crisis, and the advice he would give to his younger self. Below is an edited transcript of the conversation.

Fortune: When people think of opera, many think first of The Metropolitan Opera in New York, which has recently faced its share of challenges, with labor disputes and budgetary challenges. Has this reverberated to the LA Opera?

Christopher Koelsch: Recognizing that The Met is the largest performing arts company in the world of any kind, we don’t try to directly compare ourselves to them because it’s a little bit like chalk and cheese.

Of course, they set the standard for opera production. But it’s a wildly different model than the one that we have here. We are between a $40 million and $45 million organization annually. That fluctuates based on the repertory.

So, if The Met’s issues are, understandably, not on your mind, what is?

From an artistic point of view … my job is to clear the path and create opportunities for [LA Opera General Director] Placido Domingo to have the opera house of his dreams. We have the huge benefit of being led by the world’s foremost purveyor of this art form. There’s a huge advantage of that and I want to make sure he has every opportunity that he wants, that he can dream about.

In comparison to the Met, but also the next largest organizations in the country—which are in San Francisco and Chicago—we are the youngest yet [among] the largest opera [companies] in America. There are some liabilities there and there are some strengths there.

Because of our relative youth, we lack a third source of income. We have a contributed income stream; obviously, we rely on that very heavily. And we have earned revenue, most of which is ticket sales. We also have other sources of revenue; production rentals, minor things like that.

But what we do not have is a robust endowment that we can draw upon on a yearly basis. And so that is one of the things we are concentrating on in the next couple of years, building an endowment so that we are leaving an inheritance to the next generation of leaders at this company.

One of the strengths is that we are institutionally nimble in a way that some of the other companies in America can’t be. We are basically a fee-for-service organization.

So LA Opera is not a guild or union operation?

We don’t have obligations to any of our company members, chorus members, orchestra members, stage hands that aren’t based on actual activity in the house. The way that most union agreements in other houses are structured is that there are basically work guarantees. When the institution was created, we didn’t have a company orchestra or chorus. Those were developed over time. Those in the orchestra were looking for flexibility that would allow them to take other work in town, specifically studio work for Hollywood movies.

What that meant was that in the maelstrom of 2008, we were able to pivot very quickly and to reduce the amount of quantity that we were putting on our stage without compromising quality. And in doing so, we were able to shave $20 million out of the budget to weather that storm.

When you say “quantity,”do you mean the amount of people on stage?

I was chief operating officer at the time. The CFO and I sat in the office over a weekend and we penciled out a number of strategic plans that would allow us to reduce expenses relatively quickly. I was in charge of production, which is where the majority of our expenses come.

So, what got the axe?

We had planned a Ring Cycle, which was ruled out. That is the Mount Everest of opera production. The programming would have had to be less ambitious than that because there’s no more ambitious project that a company could take on. Over the course of two seasons, we did standalone performances of each of the four operas [of the Ring Cycle] between 2008-2009 and 2009-2010.

As overall confidence across the board has grown, we have restored a greater sense of boldness in the programmatic philosophy. You really want a healthy mixture of the traditional, the less familiar, and the experimental.

How much does Hollywood influence what is put on stage at LA Opera?

It does a lot. The biggest creative community in Los Angeles is the movie industry. Long before I got here, the founding general director Peter Hemmings began to invite Hollywood directors to work with us. We had Herbert Ross direct La Boheme, which is still in repertory for us. John Schlesinger did a couple of productions for us. That really amped when Placido [Domingo] became artistic director and then general director. We’ve had Woody Allen here. We’ve had Billy Friedkin here three times. David Cronenberg has directed for us. Gary Marshall has directed for us.

We have a project this year called Hercules vs. Vampires, which is a 1961 Mario Bava Italian B-movie that a composer, Patrick Morganelli, has removed the soundtrack for and composed an opera to be played alongside the film. Bava is cited as a major influence on the work of Carpenter, and Tarantino, and Tim Burton.

With opera, there are plenty of headlines about dwindling audiences across America, for classical art in general. Is it better to be small? Does size matter?

The thing is our audience isn’t dwindling. Our audience is actually growing. If you open a newspaper from 1914, you’ll see the same stories being written. I think it’s a collective anxiety…. My concern is the LA Opera and the LA audience and creating a company that is for and of Los Angeles. And that seems to be doing well.

Based on the financials of the LA Opera that I have seen, revenues are going down. Do you think of an opera company as a business? Because when you look at those revenue trends, it doesn’t paint a pretty picture.

The numbers you are looking at go down because the income potential goes down when you reduce the amount of activity on the stage.

We’re a nonprofit. Anyone from the for-profit world … is going to be confused because of course we lose money every time the curtain is raised. We aim for a break-even or better every single year. It is a business and it is also a service. We are providing a community service. We rely on philanthropic dollars. That’s just a fact of the business. We’ve always depended on patronage, from the Medicis to the board of directors. It’s just the nature of the beast.

So how do you gauge the company’s success?

It’s hard to judge it by the same criteria by which you’d judge Apple. Would that we had those kinds of cash reserves.

In many ways, Broadway has been able to develop a new identity over the years with audiences. How would you characterize opera’s identity?

I think that we can be and want to be all things to all people. I think there is no other art form in which it is possible to have a truly transcendent moment in which you are fully aware of human expression and human potential because we are firing on all possible cylinders in a way that no other art form can. We incorporate music, dance, theater, poetry, painting.

There’s an enormous amount of handwringing that we are increasingly a shoe gazing society. But to my mind, I see again and again so many examples of people craving spectacle, human contact, and the catharsis that comes from a shared live experience. And I can think of few places that are better to do that than in an opera house.

You have a background in music and theater, correct?

I was trained as a violinist but my professional training and graduate work was on the theater side.

Why did you go the management route?

I came to this company in artistic administration as a sort of a company manager. And it’s just been a slow growth over that period. I’m on the management side, but we are not a P&L company. We’re an opera company. So it’s very important that my mind be bifurcated at all times between artistic and management. Over 17 years, I was able to add pieces of the puzzle to my portfolio.

Is there a specific message you would send to your 17-years younger self?

I try to send it to the staff now. I need the technical director to understand that he’s also the director of PR. And the accounts payable person needs to understand that they’re also a development director. We don’t have the luxury of any one of us feeling like we can silo ourselves. The only way the company is going to be successful is if we are all working towards a common set of goals with a common set of values. If we hired a development assistant who happens to be involved in a theater company over the weekends, and she’s got a very exciting new director and wants me to see a show, I want to know that.

I think that 17 years ago I would have thought that the only thing that mattered was who was going to sing Brunhilde on Tuesday night.

How do you think of your gig now?

Without getting too maudlin, I think I’m incredibly lucky. I get to forge a path for something that I believe in 1000%. That I get to do it alongside and for the privilege of artists who I have huge respect for. It’s a challenging job, but it would be hard to lose the plot … on why you are doing it, because you are constantly reminded … in every rehearsal that you go to.

One of the things that sometimes gets lost about opera is that, in a world that is mitigated through digital means and that is so amplified, what we ask of opera singers is nothing short of superhuman. It is an extraordinarily athletic feat on par with any of the best athletes in the world. When you think about what you are asking someone to do and the skill set you need that they need to have to do it well and the amount of investment that they would have to make personally in doing it well, and the amount of personal sacrifice they would have to undergo. To me, that is no different than a Michael Jordan or a Michael Phelps. The people we are presenting on our stage are the best and the brightest of one of the most difficult things you can ask a human being to do.

No matter how hard a day gets, that, to me, is a privilege.