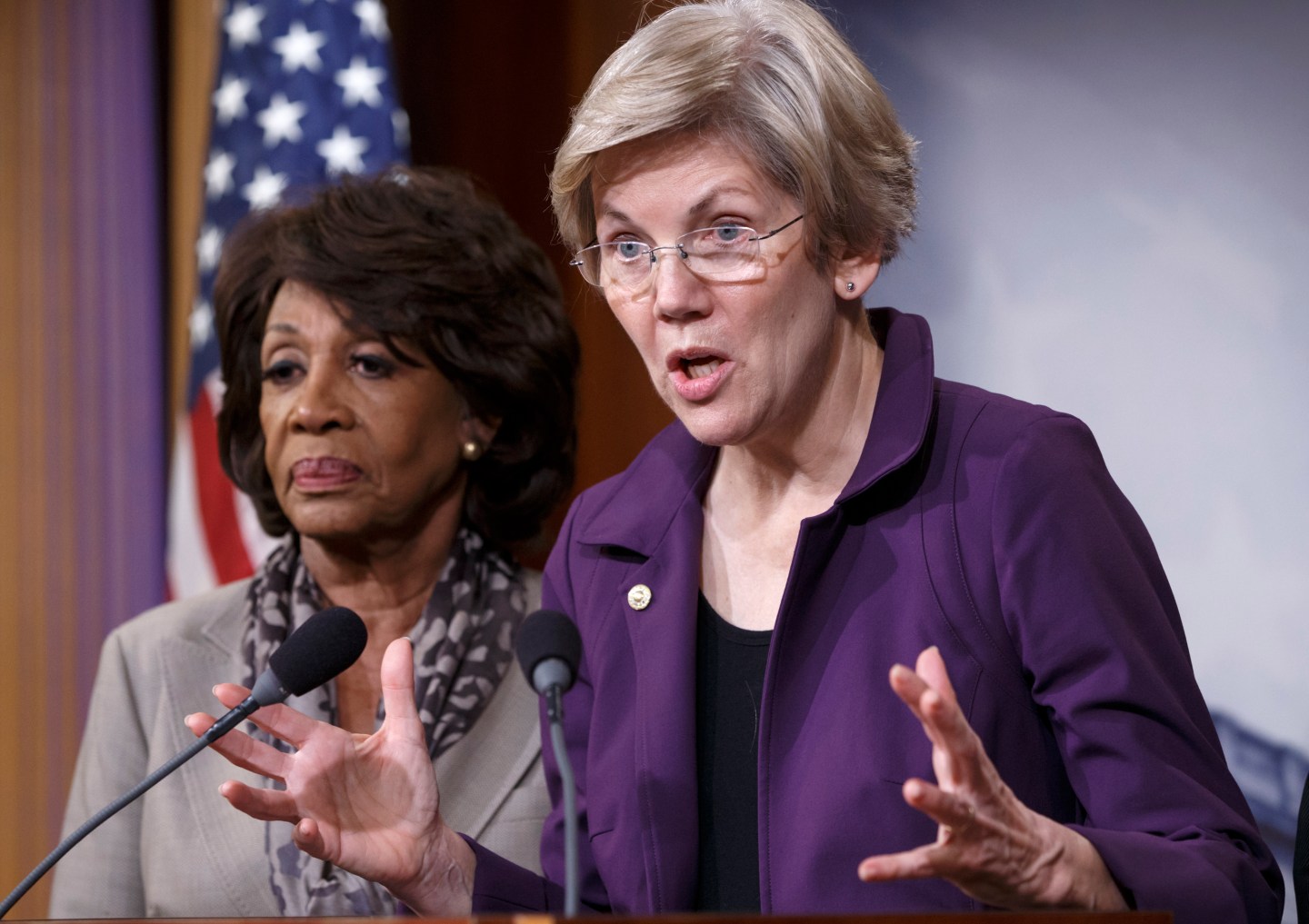 Sen. Elizabeth Warren, D-Mass., a member of the Senate Banking Committee, and Rep. Maxine Waters, D-Calif., left, ranking member of the House Financial Services Committee, express their outrage to reporters that a huge, $1.1 trillion spending bill passed by the Republican-controlled House yesterday contains changes to the 2010 Dodd-Frank law that regulates complex financial instruments known as derivatives, at the Capitol in Washington, Wednesday, Dec. 10, 2014. Democratic support for the omnibus bill funding every corner of government faded Wednesday as liberal lawmakers erupted over a provision that weakens the regulation of risky financial instruments and another that allows more money to flood into political parties. (AP Photo/J. Scott Applewhite)
Photograph by J. Scott Applewhite — AP

How big of a loss did financial reformers sustain in its latest battle with Wall Street? It comes to 0.5% of bank assets. Put another way, if JPMorgan Chase was an average American household and not a bank, regulators just made it legal for the Chases to risk an additional $400 at the races. Have fun.

To many, last week offered more evidence that in the post-crisis fight to rein in the financial sector, Wall Street has once again come out on top.

This weekend, Congress approved a spending bill that will roll back a provision of the Dodd-Frank financial reform law known as the swaps push out rule, something Wall Street has long sought to repeal. The victory—or defeat, depending on where you stand—is a lot smaller than it appears.

In theory, the swaps push out rule was going to move complicated and sometimes risky derivatives out of federally insured banks and into entities that would not be protected by Uncle Sam if they were to fail. No more bailouts of bad derivatives bets was the way the provision was marketed. But that’s not really how it was going to work, even if the rule had not been rolled back.

First of all, the swaps rule had huge loopholes. Even as Dodd-Frank was originally worded, plenty of derivatives got to avoid the push out. Interest rate swaps, for instance, which is by far the biggest swaps market, weren’t included in the rule. Those were going to stay at the banks, on the theory that banks deal with interest rate risk all the time, and it’s not all that risky. Meanwhile, Fannie Mae and Freddie Mac lost billions on interest rate swaps in the run up to the financial crisis. Currency derivatives, another large market, were also largely immune from the rule.

This fight was primarily about credit default swaps, which are the insurance-like contracts on bonds and other debt that are bought and sold in over-the-counter markets on Wall Street. CDS contracts did a lot of damage during the financial crisis, and probably would have put AIG, among other firms, under if the government hadn’t offered a bail out.

But here’s the thing: the CDS market has shrunk dramatically since the financial crisis. I am not a big fan of the CDS market. I think it’s a deeply flawed financial product, one of the worst cases of “financial innovation.” But the market has figured that out, and, in a number of areas, CDS trading has essentially disappeared.

And that’s the total value of all the stuff tied to those CDS contracts. The market value of those contracts, which is what could be lost, had diminished to $700 billion by the end of 2013, according to the Bank for International Settlements. And that doesn’t take into account the fact that a lot of banks have offsetting bets. Factoring that in, the amount of money that was at risk at the end of 2013 in the CDS market shrinks to $139 billion. And it has probably gotten even smaller since then.

Even in CDS land, there were exceptions to the push out rule. All CDS contracts that are centrally cleared—meaning, they have been guaranteed by a third party—were allowed to stay on the banks’ books, even before the recent change. That was a small percentage of trades at the time of the financial crisis. But it’s climbed rapidly since then. At the end of last year, 26% of CDS trades were centrally cleared.

So, what we are talking about? Seventy-four percent of $139 billion in potentially risky trades, or $102 billion. And that’s for the entire U.S. banking system, which has nearly $15 trillion in assets. It’s peanuts of peanuts.

Okay. “But that’s just for now,” some might say. What happens when the market heats up again, and banks start to trade CDS again on, say, synthetic CDOs of MBS debt (it’s risky stuff take, my word for it). Well, that stuff isn’t coming back to the banks. Even under the latest Washington spending bill, derivatives contracts based on structured products are still going to get pushed out of the banks.

So, why was Wall Street fighting so hard? Likely because the CDS trading business is very profitable, and they don’t want to lose it to hedge funds or other firms. Putting their derivatives trading in separate divisions, completely separate from the cash that the firms get from depositors, would have been costly to set up and perhaps not even workable. In a crisis, corporate lines between divisions quickly disappear.

The fact that this market is small, relatively, has the pro-financial reform cohort saying that the roll back on the rule is yet another sign that the banks are slowly chipping away at Dodd-Frank. But in the grand scheme of things, it didn’t change much. Banks still have to hold much more capital then they used to. Their ability to make risky bets has been significantly limited. And there is a new regulatory body that tries to make sure that individuals aren’t being taken advantage of by banks and other financial firms.

If banks pick a narrow, obscure rule and spend lots of money to fight it for four years, they can win a small victory. If that’s the state of affairs, as it appears to be, I think the crowd looking to rein in Wall Street has a lot to be pleased about.