Ghost riders in the Big Apple 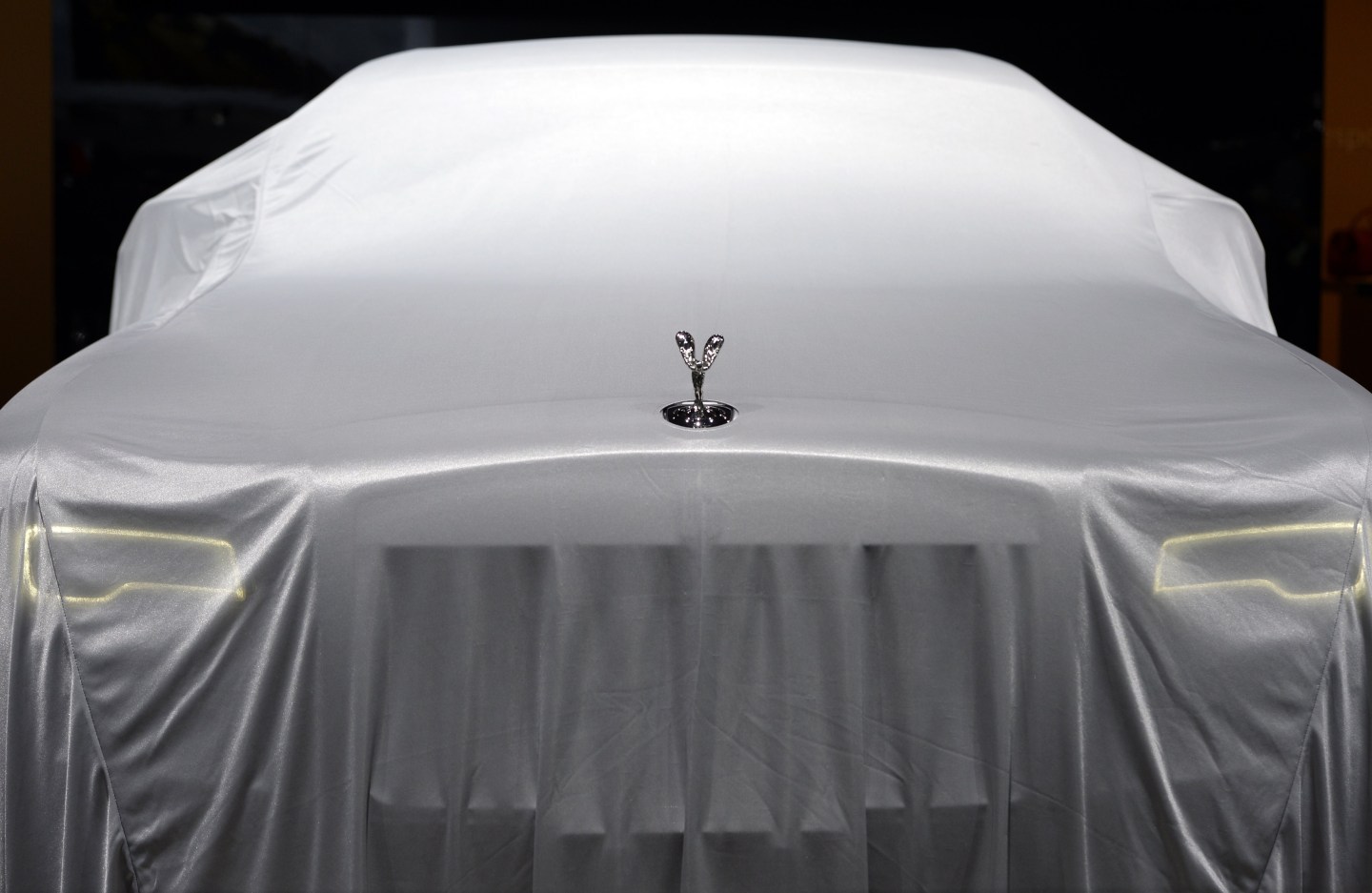 The Rolls-Royce Ghost II waits to be unveiled at the 2014 New York International Auto Show April 16, 2014 in New York at the Jacob Javits Center.The auto show is open to the public April 18-27. AFP PHOTO / Timothy A. CLARY (Photo credit should read TIMOTHY A. CLARY/AFP/Getty Images)
Photograph by Timothy A. Clary — AFP/Getty Images

At this fall’s introduction of Rolls-Royce Ghost II, Richard Carter, Director of Global Communications, said, “We do not chase volume; we are measured in profitability. Rolls-Royce will remain a rare intrinsic promise.”

The company, which has created outstanding automotive architecture for 111 years, introduced the Ghost, a smaller and more affordable car, into their 2009 line-up. Since that time, Rolls-Royce has quadrupled the number of units sold. Historically, Rolls-Royce’s brand volume peaked in 1978 with 3,378 sold, and it steadily declined through the ’80s and ’90s when in the latter decade, the company sold hundreds per year. Since the Rolls-Royce Motor Car relaunch in 2003 with the Phantom, sales ran slightly under 1,000 units per year until 2007. With the Ghost launch in 2009, sales rose quickly, topping 3,500 from 2011- 2013.

“In short, volume is four times what is was for the first five years and 20% greater than the historic peak. The quadrupling has come as the OEM added Ghost and then Wraith. This year we are confident that we will crack through the 4,000-unit level worldwide,” Carter said.

The future of the brand is evolving. Owners no longer solely consist of silver-spooned heirs to estates in the English countryside. When asked about Rolls-Royce’s clientele, Carter replied, “Our owners are completely diverse, highly opinionated, extremely demanding. They are mostly new money, taxpayers and entrepreneurs who create jobs. This is the ultimate business tool.” (Case in point: The Ghost II understands commands in Arabic and Mandarin and offers on-board Wi-Fi that facilitates email, file sharing, telephony and video-conferencing.)

Though I cannot pony up the $286,750 starting price of Rolls-Royce Ghost II, I certainly relished a recent test drive in one. And while I felt very diminutive at the wheel, it’s not a foreign idea for Rolls-Royce owners to ferry themselves around. In the U.S., the largest market for Rolls-Royce—followed by China—owners often drive their own vehicles.

After my test drive in Texas, I was more than game to experience the Ghost II on my own turf—the streets of NYC and beyond. But this time, I wanted a driver. I set up a Brooklyn-bound itinerary, ordered up a bespoke vehicle and invited my friend Diane along for the journey.

Riding in the back seat gives you a keener understanding of what makes Rolls-Royce such a coveted vehicle. For instance, the wing doors (which open opposite to how standard back doors open) make getting in and out much easier (even in a tight dress).

Our driver, Mark, although not formally trained in Roll-Royce’s White Glove program—a course designed to teach drivers the combination of driving skills and chauffeuring etiquette—played the part to perfection. As explained by Gerry Spahn, Head of Communications for Rolls-Royce Motor Cars NA, “The program teaches drivers how to continuously maintain an impression of effortlessness while maintaining at all times a precise and smooth ride. The ultimate Rolls-Royce driver can be summed up in two words: ‘effortless’ and ‘sharp.'”

Sharp indeed. Mark was dressed in a black suit, black tie, white shirt and black shoes (gloves and a hat are bygone accessories). He let us know right from the start that he was ours for the day, adding that he was from NYC and therefore knew all of the charming back routes to Brooklyn. “I can give you a tour of Brooklyn if you want one,” he offered. “If you’re not interested in talking, I can also just melt into the background.” We chose the talking tour along with an overview of the vehicle.

Mark pointed out that the Ghost’s air vents are controlled by “organ stops” that regulate the air-flow from soft touch or medium to high. Vanity mirrors are placed at eye level on the back pillars so all you have to do is turn your head to apply lipstick or tame your hair. Lamb’s wool carpets coddle your feet (yes, I took my shoes off to enjoy the feel!) and 18 individually tuned speakers provide a non-invasive surround sound.

Our car was colored a claret red (60 hands and 450 hours to paint) and the interior wood was Paldao, a warm colored veneer infused with black striations that comes from a single tree to ensure a seamless line from front to back. The moccasin colored interior seat leather, with a contrasting darker stitch, was sourced from young bulls that live 2,000 feet above sea level to eliminate mosquito bites or barbed wire that can scar their surface.

One would think that being in a gorgeous bespoke $380,000 Ghost II would encourage people to stop, stare and point—like when I’m test-driving a Corvette or Jaguar—but the Rolls-Royce keeps a delightfully discreet profile even in trendy Brooklyn.

Our first stop was Five Leaves in Greenpoint, a homey, vintage-inspired restaurant with inventive organic foods that ranged from home made ricotta with fruit-nut bread to roasted duck potpie. After lunch we wandered around the neighborhood picking out Polish jams and skin treatments. I called Mark and he was conveniently waiting for us at the corner.

Our next stop, “Killer Heels” at Brooklyn Museum, was a retrospective of women’s shoes from 16th century Italy to today’s runway fashions. On display were eight-inch heels from Lady Gaga and a set of Ferragamo stilettos once worn by Marilyn Monroe.

It was raining when we emerged from the museum. Not a problem. Mark had the umbrella ready to escort us to our Ghost.

The last stop of the day was IKEA on the waterfront in Redhook, Brooklyn. Our mission was to pre-shop for Thanksgiving and load up on kitchen towels, candles and Swedish cookies.

As I was approaching the check-out line, I realized that I didn’t have my cell phone and Diane was nowhere to be found. After wandering around hopelessly in the lighting section I spotted my friend calmly sorting through duvet covers. “I don’t have my cell phone!” I gasped. “Do you have Mark’s number?” “No.” she said. “Don’t worry, I’ll call your phone and hopefully he’ll answer.”

He did. I had left my phone in the car. That said, Mark was waiting for us at the covered entrance because it was raining heavily. After being tucked into the car, he turned on my favorite radio station and ferried us back to the city. To wit, Mark took some secret shortcuts to get us on the bridge and out of traffic, keeping us flowing smoothly home.

Mission accomplished. Ahhh… the privilege of being privileged.