A solution to bad online-daters: expel them 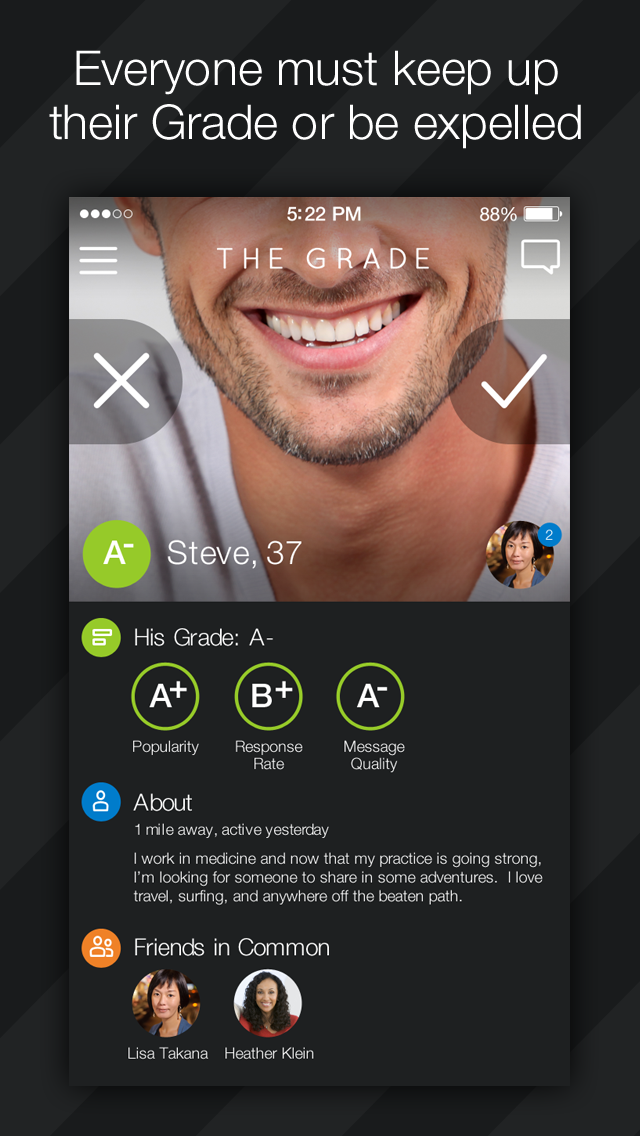 At more than 1 billion swipes per day, the dating app Tinder has proven there is a mega market of young singles who want a fast, tactile way to find potential dates. But Tinder’s pick-up-and-play feel can result in fly-by interactions that, for some, are too casual, and perhaps even offensive.

Singles now have yet another mobile dating option, The Grade, which comes with an unusual twist. Launched last month, the service gives each user a letter grade, and, most notably, expels those who earn an F.

You might think it would be hard to fail out of dating apps that only require basics like age, location, a brief bio and a photo to get started. Such a system sounds more conceivable on pay sites like Match.com or JDate, on which daters fill out detailed, extensive profiles.

But in fact, The Grade has already flunked 5% of its small pool of singles.

“We want to hold users accountable for their behavior,” says Cliff Lerner, CEO of SNAP Interactive, which created The Grade. “We believe the next big thing in online dating is accountability.”

Lerner knows a thing or two about the online dating space. In 2007, his company built the dating site AYI (Are You Interested), a pay service aimed at adult singles over 45. With AYI going strong at 100,000 paying subscribers, Lerner wanted to create a mobile-first, social dating app that is based around the promise of high-quality users.

“We don’t think anyone is delivering that right now,” he tells Fortune. “We think people are ready for the next Tinder.”

Lerner cautions that Tinder, Hinge, JSwipe, HowAboutWe, Plenty of Fish, and all the other mobile dating apps you could name are not necessarily competitors. Rather, he uses the argument that the success of any one of them is a rising tide that should lift all boats.

Instead, he considers The Grade’s competition to be mobile games. After all, the feel of any swipe-based dating app is that of a fun, casual game. Lerner wants to get away from that feel. Many daters, women especially, are frustrated by the people they see on dating apps who aren’t truly looking to find a relationship, but rather, to hook up.

The Grade wants its users to be a show a bit more seriousness by responding to their messages, and by using proper grammar. (“HBU,” standing for “how bout u?” is the no. 1 most commonly used abbreviation by women on dating apps right now, Lerner says—a sign of the pervasiveness of slang.)

The Grade’s concept—that everyone has been evaluated—might remind some of controversial service Lulu, an app for women that made a splash earlier this year for inviting its female users to give men overall scores and to rate their physical appearance, bedroom performance, and personality. (The Daily Beast wrote that it was “ruining dating.”) The dangers of a system that allows people to publicly critique former lovers are obvious.

But daters on The Grade aren’t grading each other. Instead, the grades are determined by an algorithm—which is safer, but also potentially less exciting.

Sloppy texters and hard-to-get, infrequent responders, beware: the algorithm looks at everything from grammar to how often users respond to messages. Overall grades are calculated based on the profile quality (are your photos blurry?), responsiveness (when a potential date writes to you, do you write back?), and message quality (are your messages offensive or filled with typos?).

After using the app for a little while, daters are automatically given a grade via an alert. More alerts will follow if their grade falls precipitously. In this regard, the grades, which are always being updated, could be a double-edged sword. Choosy women excited about no longer seeing men who send offensive messages can’t be so choosy that they don’t respond to messages—or they, too, risk getting a poor mark.

Even though the U.S. online-dating industry is still small ($2 billion in annual revenues, according to the most recent IBISWorld report, and dominated by IAC, which owns Match, OkCupid, and Tinder), it is a space that can yield compelling data, and quickly. The team at OkCupid proved this a few years back with the project OkTrends, which shared fascinating insights gleaned from the behaviors of online-daters.

Similarly, in the month since it launched, and with only 7,000+ downloads, The Grade has already tracked some useful trends about male vs. female daters. Understandably, since it is the app’s selling point, the data it is sharing is centered around how behaviors change when grades are added to the mix.

According to the company, the rate at which women “like” men increases 21% when the men have grades. For men, there is no change at all. Similarly, women respond to messages from men 47% more often when there is a grade, while the response rate from men only goes up 3%. Both of those data points, of course, suggest that men are, well, a bit less exacting in their swiping. They’ll “like” a woman, and message her, whether there is some signal of quality or not. Meanwhile, both women and men, when a grade is involved, use almost half as much “inappropriate content or slang” in their messages (women 53% less, men 43% less).

One last comparison Lerner makes, though it is anecdotal: women care more about message quality, he believes, while men care more about response rate. Thus, The Grade isn’t just aimed at women who fear offensive jerks (in a survey by The Grade, 90% of women said they have received sexually suggestive messages on mobile dating apps); it’s also aimed at men tired of not getting responses to their messages.

Pleasing both parties, of course, is a tall order. And if your profile isn’t up to snuff, the message you receive is rather blunt: “You have failed to meet The Grade standards, resulting in loss of membership.” It’s easy to imagine the company facing issues of user outrage if someone feels they were unjustly expelled.

Never fear, you can appeal the decision in writing. But the writing had better be good.