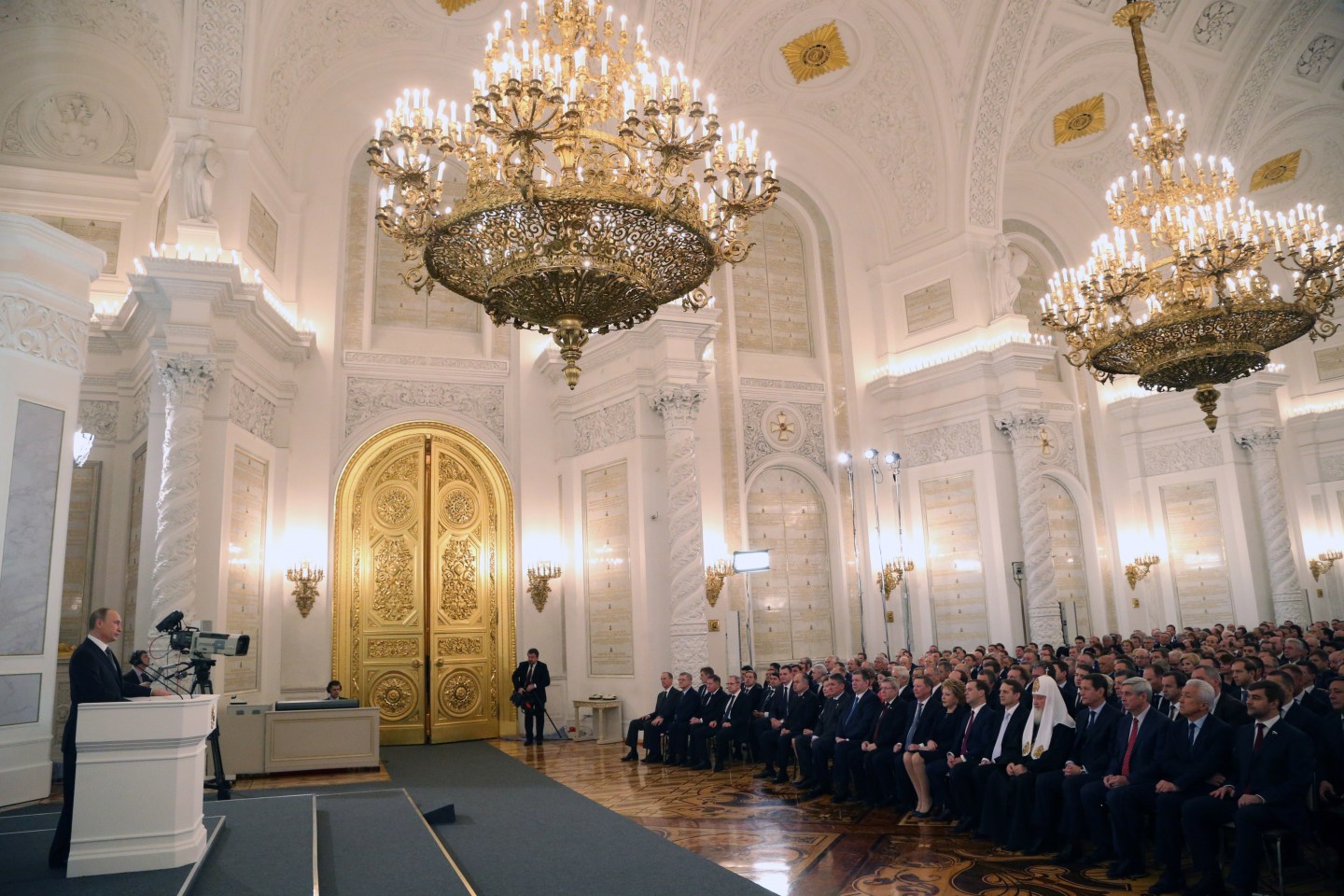 But in a State of the Nation speech that was full of his trademark defiance of the West, Putin gave no hint of backing down over Ukraine, and called on lawmakers to prepare for some tough years ahead.

Putin said that the Ukrainian province of Crimea, which Russia annexed in the spring, had a significance for Russians similar to the Temple Mount in Jerusalem for Jews, because it was the place where Prince Vladimir of Kiev had converted to Christianity in the 10th century, paving the way for the conversion of the Russian nation.

However, his rhetoric on Ukraine was otherwise largely defensive: he did without references to the putative region of “Novorossiya”, or ‘New Russia’ the Tsarist-era term for much of contemporary Ukraine that rebels in eastern Ukraine have revived in their quest to re-attach themselves to Russia.

Putin’s speech had been hotly anticipated after a rough week for the economy. The government and central bank are both now forecasting a sharp recession next year after the Organization of Petroleum Exporting Countries refused to cut oil output to balance the market, causing the price of Russia’s most important export to slump to a five-year low.

But in an hour-long speech, Putin avoided mentioning either the R-word or, indeed, the word “oil” at all. Instead he repeated calls–familiar from many previous such addresses–for the state to treat business better and for an end to predatory bureaucracy.

“It was the same old stuff,” said Liza Ermolenko, an analyst with Capital Economics in London, pointing to the gap between Putin’s rhetoric and recent actions such as the forced nationalization of oil company Bashneft, which had been in private hands for over eight years.

“It’s difficult to see why anybody would want to repatriate their savings in the current situation,” Ermolenko said. She sees Russia’s economy contracting by 1% next year, a touch more than the Economy Ministry’s forecast of 0.8%.

At the end of the speech, the ruble was 1% lower against the dollar at 53.30. It’s lost over a third of its value this year, making it the worst performing currency of any major economy in the world.

Putin didn’t comment on rumors that Russia would reintroduce capital controls, but did say he wouldn’t allow the country to be internationally isolated. And he also promised to punish ‘speculators’ against the currency.

“We know who they are, and we have the tools to punish them,” Putin said.

By lunchtime in Europe, renewed pressure on the oil price had dragged the ruble down even further, to 53.72.