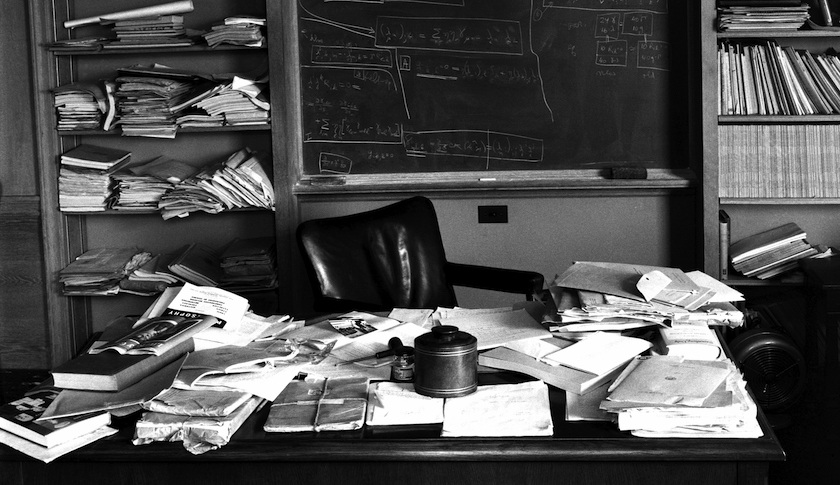 You’re trying to get your team to think creatively. But instead you’re getting blank stares… followed by feeble, minor variations of solutions you’ve already heard a dozen times. What can you do?

This is a common problem at most offices today. Everything seems to be in a state of flux. Long-established industries are being disrupted by newcomers and tech startups. Companies need to change, management knows it, and they are looking for fresh ideas.

But you probably didn’t hire these people for their creativity. It’s not what they do. As a management consultant, I once sat and watched a team of insurance brokers try to brainstorm. It wasn’t pretty. Here are five ways to get your colleagues’ creativity engines started.

1. Put them in a messy room

Sounds silly, right? A study conducted at the University of Minnesota, and published last year in the Journal of Psychological Science, found evidence that just being in a messy room can help people think more creatively.

Participants in several experiments had to fill in questionnaires while sitting in an office. Some were given a clean and tidy office; others, an office in disorder, strewn with papers and supplies everywhere.

Participants were then presented with various tasks to test their ability to think creatively. In a nutshell, those who had first spent time in the messy office trounced those who had been in the neat one. They were more likely to think up creative solutions to problems, and more likely to embrace new and innovative products over conventional ones.

“Disorderly environments seem to inspire breaking free of tradition, which can produce fresh insights,” wrote Minnesota’s Kathleen Vohls when reporting the findings. Just making the office untidy “made a whopping difference to people’s behavior,” she added.

2. Get them to play liar’s poker first

“Liar’s Poker,” a game of bluff and double-bluff played with dollar bills, was made famous by the writer Michael Lewis 25 years ago. His book of the same name chronicled the dishonesty of Wall Street, where the game is popular.

The game puts a premium on lying. Basically, you have to lie to win.

If you can’t get enough fresh ideas out of your team, maybe you should play a few rounds. Or play any other game where participants have absolute carte blanche to lie, cheat, and steal as much as possible.

The reason? According to Francesca Gino at Harvard Business School and Scott Wiltermuth at the University of Southern California’s Marshall School of Business, there is a clear link between dishonesty and creativity.

It isn’t just that the dishonest also tend to be creative, they found. It’s that even the honest become more creative if you can first persuade them to do a little lying, cheating, and stealing.

Releasing people from their ethical boundaries seems to help free their minds from abiding other rules as well, the researchers concluded.

3. Send them out for a walk

Get out of the project room. Stop sitting around that table staring at the whiteboard. Stop thinking that the more hours you are all sitting in the same room eating doughnuts the more productive you’re being.

People are most likely to do their best creative thinking while in motion—whether outdoors, down a corridor, or even just on a treadmill, according to research conducted recently at Stanford University.

In a series of experiments, participants were given a variety of tests to see how well they were able to come up with creative solutions to problems. Those who answered while walking, or just after walking, fared much better. Indeed, making participants walk while answering questions doubled the number of creative responses.

The research was conducted by Marily Oppezzo, now a psychologist at Santa Clara University, and was published earlier this year in the American Psychological Association’s Journal of Experimental Psychology.

If you want to get people to think creatively, first make them bored. Really bored. The more bored they are, the more they will daydream, and good things will follow.

It sounds like a spoof, but a couple of years ago British researchers found it was no joke.

Sandi Mann and Rebekah Cadman at the University of Central Lancashire conducted experiments in which participants had to come up with creative uses for a pair of styrofoam cups.

“Boredom at work has always been seen as something to be eliminated,” Mann said when announcing the results early last year, “but perhaps we should be embracing it in order to enhance our creativity.”

5. Borrow a big cardboard box from the mail room

If you want to encourage people to think “outside the box,” it can actually help to get a big cardboard box and then make them sit outside of it.

That’s what Angela Leung of Singapore Management University and fellow researchers found a few years ago . While giving participants various challenges that required creative thinking, they made them act out various metaphors. Some sat inside or outside a five square-foot cardboard box. Some were given two halves of a coaster and asked to “put two and two together.” And so on.

Bottom line: Those acting out a metaphor tended to do better at developing creative solutions.

Yes, it sounds like an episode from “The Office.”

But anything that gets people out of their usual routine and environment is likely to break up conventional thinking. If you give people license to be different, they are more likely to think differently.

If sitting outside a box seems a step too far, Leung notes that just getting people out of their “Dilbert cubicles” is a step in the right direction.