A smart home is where the heart is for Best Buy 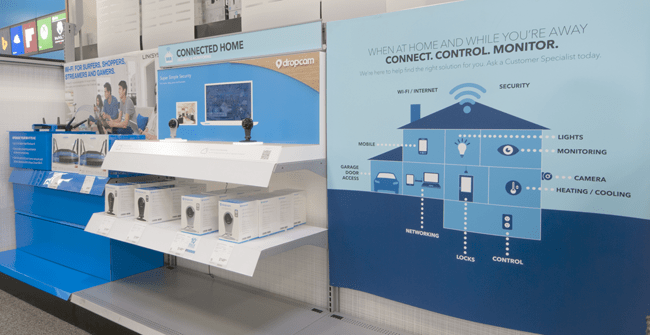 More and more Americans want to be able to dim their outside Christmas lights without having to leave the comfort of a warm bed. Or control their home’s air conditioning from the office. Or maybe just set up a puppy cam to keep a eye on Fido and to entertain friends online.

Trying to cater to that growing interest in “smart home” technology is the latest example of Best Buy’s (BBY) efforts to make its stores bigger destinations in an era in which so many consumer electronics are available online and “show-rooming”—using stores for browsing then shopping at Amazon.com—has slammed brick-and-mortar retailers.

In time for the crucial holiday season, the largest U.S. electronics retailer has just finished rolling out “Connected Home” sections at 400 of its 1,050 or so stores, essentially 850-square-foot areas that showcase 100-plus items, ranging from Philips Hue smart lighting, where bulbs can be programmed to turn on or off with the sun, to Nest programmable thermostats, to home surveillance cameras. A sign of how important this is to Best Buy: the smart home category is front and center in its Black Friday promotions.

The idea is to capitalize on the booming market for home automation by making a bigger statement with a full-on section in stores, as opposed to having the products scattered in different sections. Indeed, a report in February by Juniper Research estimated that smart home products market could hit $71 billion by 2018, nearly triple what it was in 2012.

While the retailer reported surprisingly strong comparable U.S. sales last quarter, they are still flat for the fiscal year through three quarters. And the company has not reported annual growth by that measure since 2010.

So Best Buy CEO Hubert Joly told investors last week that to grow consistently, “we have to lead” in key categories, rather than those where electronics are now commodities, and specifically pointed to smart home technology, as well as wearables and home theater as chief among those hot areas.

The relative complexity of these technologies, and interconnecting them, has left an opening for Best Buy to serve intimidated customers in its stores and counter a problem that has bedeviled countless retailers: shopper traffic declines.

“We want to show them what’s possible. That’s very difficult to do in a digital-only environment,” Josh Will, Best Buy’s senior vice president and general merchandise manager for cellphones, connected home products, and its mobile stores, told Fortune. “It’s a place where like products come together, and the Blue Shirt (store associate) can help explain them.” (Best Buy’s Geek Squad service can perform the in-home installation.) The associates get extra training for these products.

Will wouldn’t say whether at this early stage the smart home products are selling better now than when they were in other sections, but he pointed to Dropcam, a video monitoring product, as among the early successes. (He also said that puppy cams are the top reason people buy that product.)

At a Best Buy on New York’s Upper West Side, the Connected Home section is located right by the home theatre section, given the similarities with the connected home category in terms of broadband needs. Wi-Fi routers used to be sold in the computers area but are now with connected home products since they are the plumbing of the smart home.

It is understandable why Best Buy wants a piece of this business. Some 13% of U.S. households with a broadband connection own at least one smart home device, according to market intelligence firm Park Associates, while 60% who have at least three devices see it as key for the products to be able to talk to each other as part of a connected system.

After a few false starts with consumers, home automation looks like it’s ready for prime time. Ben Arnold, a consumer technology industry analyst with NPD Group said that there are fewer and fewer silos on consumer electronics, making interaction between devices easier and priming the category for mass adoption. Arnold likes the idea of dedicated store spaces for home automation products because people are still getting familiar with the devices, and the in-store experience is crucial. “It becomes a hub to learn about those things,” he said.

Still, Best Buy isn’t the only retailer trying to get in on the action. Staples (SPLS) in June announced plans to create home and office automation “hubs” at 500 of its stores.

Meanwhile, Home Depot (HD) in August said it was adding smart garage door openers, thermostats and water heaters. Amanda Parrilli, the director of strategic business development for home automation at Home Depot said that safety and security and energy management products are popular within the category, and that the lighting sub-category is growing and with its lower prices, a way to draw in more newbies.

However formidable the competition might be, home automation seems a natural category for Best Buy, with its position in digital products firmly planted in consumers’ minds, and enough sophistication in the products so staff expertise is an important competitive advantage.

“Best Buy is going to have to have a presence in this segment,” said BB&T Capital Markets analyst Anthony Chukumba. “Assuming they do it right, this is Best Buy’s category to own.”