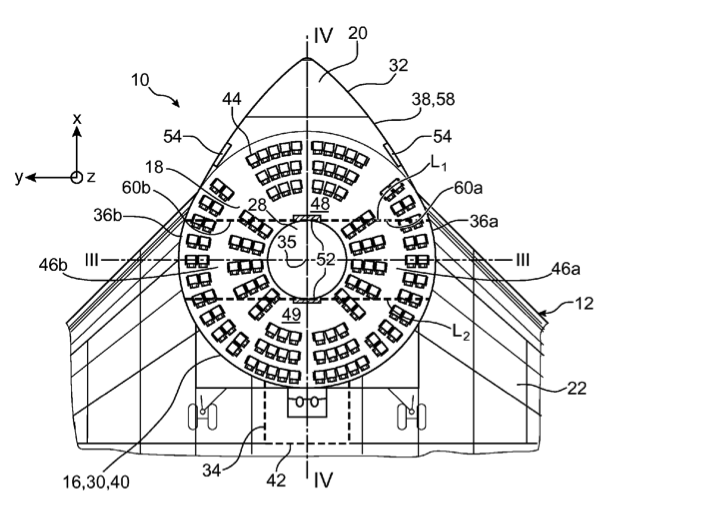 The research department at Airbus SA just seems like the funnest place to work these days.

It’s only a couple of months since the Toulouse, France-based company filed a patent application for a new ultra-economy class concept that looked like a row of bicycle saddles. Now its scientists have dreamed up something much more outlandish: a revolutionary, futuristic aircraft design where passengers sit in a circular cabin enclosed in a sort of delta-wing structure.

Viewed from the side, the design looks like a raindrop on its side (or like some of the jet-propelled cars designed to break the world land speed record, if you prefer). Viewed from the top–and this is what makes you wonder about how team in Toulouse dreamed it up–it looks strangely reminiscent of a doughnut inside a “Jésuite”, a popular triangular French pastry.

According to the patent filing, Airbus’ scientists say it could provide a “simple, economic and efficient solution” to one of the main shortcomings of the traditional cylindrical passenger cabin: the need for relatively heavy “sealed bottoms” at the front and back of the tube to cope with the effects of pressurization.

Sadly for enthusiasts of air travel and sci-fi films, it looks like the project is going to remain on the drawing board for the foreseeable future.

“It’s just one of many ideas,” a spokesman for the company said, pointing out that Airbus files for over 600 patents a year, mainly just for the sake of protecting intellectual property. “It doesn’t mean that we’re going to be working on making it a reality.”

If Airbus were to try to develop the model commercially, it would have to overcome some formidable technical and regulatory obstacles. The fact that passengers are supposed to board from below via a hatch, for example, doesn’t sit comfortably with regulations on emergency exits. And such a radical design might easily require changes to the infrastructure at airports (much like the A380 did).

The Airbus spokesman couldn’t confirm whether the staff canteen in Toulouse sells Jésuites, either separately or together with doughnuts.