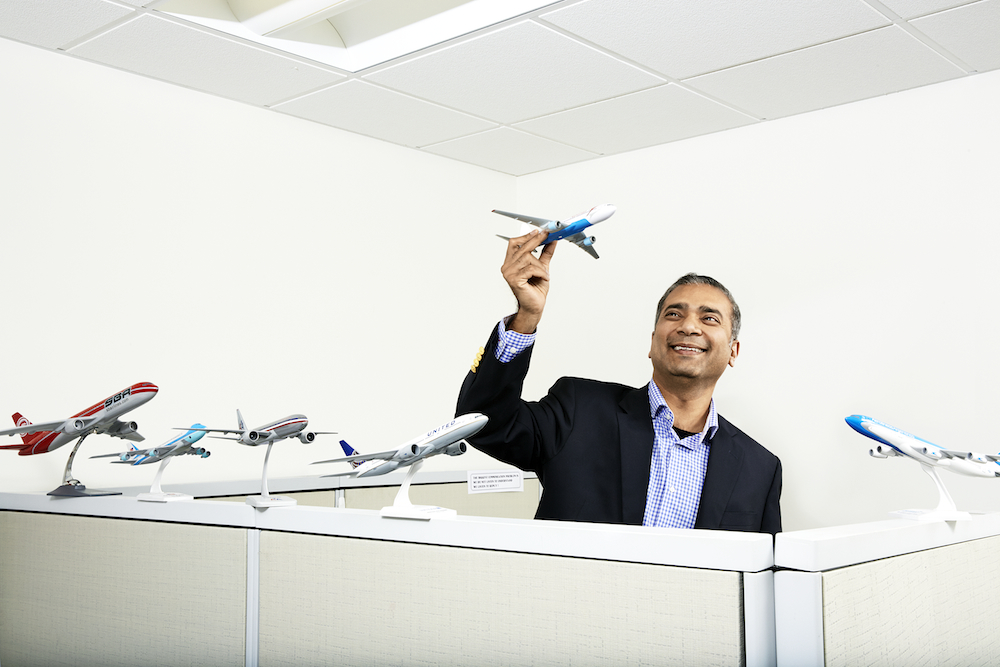 It’s one of the paradoxes of modern shopping: Customers crave the round-the-clock convenience and low price of buying online—except for when they desperately want help from a human being. That, in a nutshell, is the combination that Sam Jain captured when he created CheapOair. The formula has worked: It is the largest independently owned online travel agency (OTA) in the U.S., ranking No. 4 in domestic gross bookings—$3.5 billion last year—after Expedia, Priceline, and Orbitz. Unlike its rivals, CheapOair focuses on air tickets rather than chasing the higher margins of hotel bookings. Its algorithms seek out rock-bottom fares, often by using multicarrier itineraries. An immigrant from India, Jain, 42, came to the U.S. at 19, built a travel business, and then had to start all over again when his industry shifted to online booking. His story:

I grew up in New Delhi, the youngest in a fairly traditional Indian family. I come from a family of entrepreneurs, so a business career was expected of me. From the time I was 14, I would help in my father’s office with small chores. The value of hard work was part of my upbringing.

In 1990 I went to the University of Delhi for a year and a half, then quit. Back then most Indian families like ours knew that the kids would end up running the business, so parents didn’t encourage their children to go to college. It has changed now, and I want my kids to finish their education. But I was 19 then. There was so much action happening in the real business world, and I wanted to be part of it.

My dad and I decided that I would go to the United States. He had a jewelry export business then, and getting into the U.S. market was the next opportunity for growth. I was to set up an office in New York, and I was extremely excited about going there on my own.

It was February 1992, and the two countries were very different. Back then it took seven years to get a telephone in India. In the U.S. I was blown away at getting a phone in a matter of days. Everything moved faster here, and I had to adjust to the new culture, especially in Manhattan, which was a different world—fast-paced, with beautiful architecture, and a culture with hardworking people.

Unfortunately, between the Gulf War and the recession, it was a bad time to be starting a jewelry business. When things didn’t work out, I started helping some friends who owned a home-based travel agency and learned the business. Back then small, minority-owned travel agencies did a lot of business with ethnic communities: the Indians, Greeks, Chinese. People would buy plane tickets from people they trusted.

There was no automation, and travel agents would have to look through reams of paper with fare codes, rules, and restrictions before they could quote a fare. It was very cumbersome. I saw this large-volume business being managed in an inefficient way and thought, Since we’re working with 200 airlines, why not automate things? That would guarantee finding the best price for the customer.

I didn’t know how to create a database, so I gave a software development team in India specifications for what was needed. It cost less than a thousand dollars to develop the system. When my friends with the travel agency decided to return to India, I thought it would be great to start my own business with what I had learned.

So in 1994 I launched FareBuzz with personal savings and a little money from my dad. I rented an office in Midtown Manhattan for $500 a month, bought and assembled furniture from Staples, and found a secondhand phone system. To keep the initial investment low, I did everything myself, right down to sweeping the floors.

I aggregated negotiated airfares from wholesalers and sold them to retail agents. The agents did the bookings, and I’d process the payments and do the rest of the back-office work for them. The system I developed streamlined the wholesale ticket fulfillment business and saved time in giving customers fare quotes.

I loved that there was no red tape in the U.S. compared with India. My new company was incorporated in a day; a tax ID took mere days to obtain. These things would have taken months, if not years, in India. A big difference I noticed was the reliance on the latest technology in the U.S. to obtain real-time reports and accounting, where in India the labor is much cheaper and everything was done manually.

That first year, I did about $400,000 in sales and operated at a loss. Anything I made went back into the business to grow the automation, marketing, and processes. I learned the value of retaining customers rather than acquiring new ones. By keeping the customers I had, I lowered the marketing costs and started to make a profit. By the second year FareBuzz was profitable, and I hired my first employee in 1995. It moved fast after that.

A couple of other companies started automating systems and selling the technology to travel agencies, but we kept the system we developed for ourselves. We operated within our means, and I never took on any debt. Traditionally, you don’t take on debt in India.

In the mid-’90s I became a U.S. citizen, and a few years later I got married. The U.S. had given me everything I was striving for, and I wanted to be able to give back. We now work with many charities, including Unicef, Doctors Without Borders, and more.

I think the biggest challenges for immigrant entrepreneurs lie in understanding the American consumer psyche and learning the language of business as a nonnative speaker. You have to be able to communicate effectively to be treated seriously.

We had strong growth until the late ’90s, when our sales were about $12 million. Then it became obvious that e-commerce would be the next frontier. Travelocity and Expedia launched. Everything moved from phone to email, and if you didn’t adapt, you wouldn’t survive. So we decided to build our own Internet booking engine and hired our own engineering team. We also acquired Travelong, which had many corporate accounts and technology that would be a good addition to our own system.

In 2003 we launched Fareportal, a travel-industry technology company that was bootstrapped with limited means compared with our well-funded competitors. It took three years before we could launch our consumer e-commerce arm, CheapOair. At the time, I noticed that none of the OTAs listed a phone number on their websites. It hit me that we should build a model bridging the gap between traditional travel agencies and OTAs, so we put a call-center phone number on every page. Our customers can book online, and we have trained travel agents in call centers to answer questions.

The first day, we sold 20 tickets, and 18 were purchased with fraudulent credit cards. By the time we figured it out a couple of weeks later, it was too late to cancel the tickets. It was both disheartening and a great lesson in e-commerce. So we hired a couple of companies to verify our credit card transactions.

Today, in addition to using third-party vendors and our own proprietary software, we have 60 people calling banks and customers for verification before accepting transactions. It’s crucial: If a sale is fraudulent, we have to pay the airline and take the hit.

As our name says, we cater to the budget-conscious air traveler. When the economy went down in 2008, we grew rapidly because more consumers shopped around for the best deals, which helped new brands like ours. We started designing our mobile app three years ago, and its usage is growing fast.

Over the years we’ve invested heavily in building call centers around the world. Now we have seven locations: two in the U.S., three in Canada, one in the U.K., and one in India. An eighth is planned for the Philippines. Today 87% of our customers are in the U.S., and 13% are from Canada and the U.K.

LEVELING OFF The share of travel arranged online is still ascending, albeit more slowly than in the past.Graphic Source: PHOCUSWRIGHT

The margins are better with call-center sales than online, so we concentrate on customer service there. When we’ve got a customer on the phone, we cross-sell hotels and rental cars and upsell ancillaries like seats with more legroom. The consumer can save over published fares through the call center on certain international flights, and we get a better commission. So it’s a win-win.

Back in the ’90s I wanted to prove to myself, and to my dad, that I could run a successful business. Today I’m proud to have built a successful organization that provides jobs for so many people. We are one of the fastest-growing air OTAs, but we don’t see ourselves as being in a race with anyone. If we just continue to focus on volume and our core strengths, we’ll continue to grow.

My Advice:
Sam Jain
Founder of Fareportal and CheapOair

CREATE MORE QUIET TIME. When I travel long distances, I fly business class to get peace and quiet. I try not to drink alcohol or watch TV. Instead I take the time to think. A lot of my ideas come from that quiet time.

NIP OFFICE POLITICS IN THE BUD. We initially had power struggles in our call center in India. We don’t micromanage, so we told them, “Deal with your own issues. We’ll find out what’s happening by reading your reports and deliverables.” We had the employees focus on daily performance indicators, so there was no time for office politics.

IGNORE CONVENTIONAL WISDOM. In 2008 everyone was asking, “When are you going to move into the hotel business, which has higher margins than air?” So we started CheapOstay, a hotels-only brand. But after two years it wasn’t making any money. Half our executive meetings were about CheapOstay, and the air business was hurting. So we pulled the plug on the hotel business and lost a few million dollars, but returning the focus to our core strength paid off.