At $15.6 million, the world’s most expensive watch is up for grabs 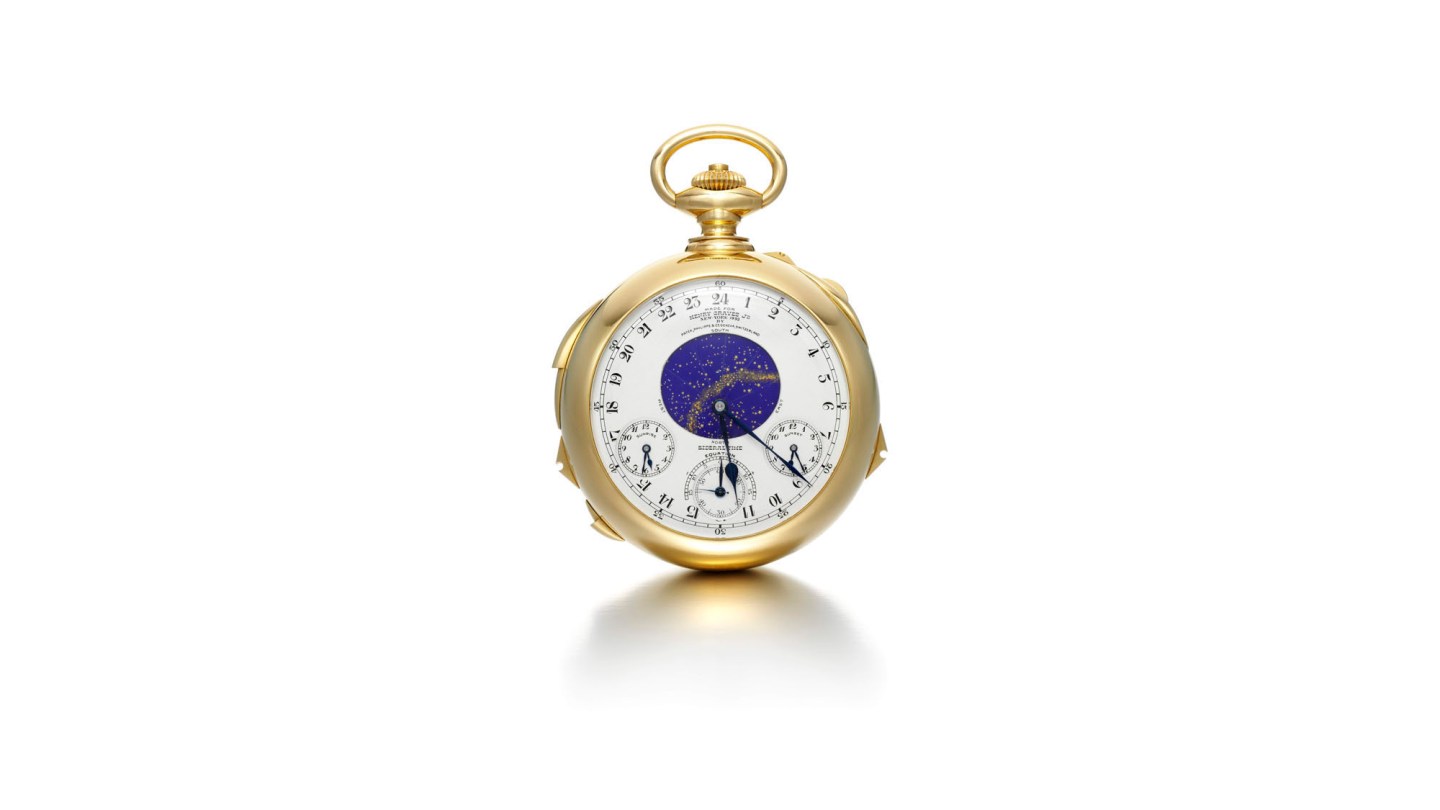 When it comes to coveted objects, there are those that capture our collective imagination because of what they represent, such as Picasso’s Guernica. There are those that drive headlines because of the monumental prices they reap— for instance, the $142 million paid for Francis Bacon’s triptych: Three Studies of Lucian Freud at Christie’s earlier this year. Then there are the items that captivate because of their place in history, say a copy of the Gutenberg Bible. Still yet are the objects that, owing to their spectacular provenance attain mythical status, like the 33-karat Krupp Diamond that Richard Burton gave Elizabeth Taylor in 1968 (it sold for $8.8 million at Christie’s three years ago).

And then there is the Graves Supercomplication. An 80-year-old pocket watch commissioned by the secretive New York financier Henry Graves, Jr., one of the greatest watch collectors of the 20th century. It is slated for auction on November 11th, at Sotheby’s in Geneva, following its two-month world tour dazzling Hong Kong, Beijing, Shanghai, London, and New York. The auction house has put a low-end estimate on the watch at $15.6 million (or 15 million Swiss francs). The Supercomplication checks all of the above boxes and more.

Horology’s answer to the Mona Lisa, the Patek Philippe double-dial pocket watch took five years to design and another three just to manufacture. Made of 18-karat gold and incorporating 24 complications (those functions outside of basic timekeeping) — it is hailed as the most complicated watch of its era. Beyond the hours and minutes, the watch is capable of measuring sunrise and sunset, features a perpetual calendar, and chimes the same melody as London’s Big Ben. Its crowning glory however, is the celestial chart that perfectly plots the night sky above Graves’s former duplex overlooking the Central Park Zoo on Fifth Avenue.

When it was delivered in 1933, the Supercomplication cost Graves a steep 60,000 Swiss Francs, equal to $15,000 at the time, about $275,000 in current dollars — although such a commission would likely cost more than $2 million to replicate today.

And while many Apple users breathlessly await the full-scale launch of next year’s Apple Watch, among watch aficionados, it is the Supercomplication sale that is the most anticipated timekeeper to hit the market in recent memory.

The Supercomplication’s first and only time under the hammer came in 1999 during an auction that had all of the raw tension and excitement of a thriller — as six bidders were ultimately vanquished; reduced to two in a matter of minutes before an anonymous victor offered up an astonishing and record breaking $11 million. To date, that record has yet to be broken.

The Supercomplication’s sale irrevocably changed watch collecting, transforming it from a clubby hobby among a small clique into a global money spectacle much like art, cars, and wine. Today, blockbuster watch auctions are routine and seven figures for a single piece is no longer a rarity. Indeed, Swiss watch exports (the dominant force in high-end mechanical timepieces) have jumped 295% from $6.1 billion in 2000 to $24 billion in 2013.

Then again, the Supercomplication was never simply a timekeeper. It was the symbol of an era. Manufactured at a time when owning watches — once the exclusive domain of royalty had passed to America’s industrial princes — just as the country began its rise as a global superpower. It was also a time when watchmakers were still considered some of the most innovative engineers in the world. Crafted and calculated entirely by hand, the Supercomplication is a remarkable feat of micro-mechanical engineering, representing the absolute outer limits of technology for the period. Last serviced in 1969, it runs just as the day it was shipped from Geneva to New York in 1932, with explicit instructions to the U.S. Customs Bureau not to attempt to wind the watch to avoid disrupting the mechanism.

Graves, the scion of a wealthy banking family was a connoisseur and fiercely competitive sportsman. He approached collecting much as he did sport. His homes bulged with expensive tapestries, rare Chinese porcelains, and Old Master etchings. Extraordinarily private and a bit eccentric, Graves kept his exceptionally rare coin collection in a customized cabinet in his master bathroom.

During the early years of the 20th century, Graves engaged in something of a gentleman’s duel with his designated horological rival, James Ward Packard, the luxury automobile pioneer, to possess the most complicated timepiece ever crafted. His Supercomplication was the victor.

Few thought the world’s most coveted watch would ever end up at auction. When it did fifteen years ago, many in the watch world were as shocked, describing the episode as if the Mona Lisa had been offered up to the highest bidder.

So how has it come to pass that this ticking legend has come on the block not once but twice?

As it turned out Graves was a man who was as pathologically private as he was competitive. Commissioned at the height of the Roaring Twenties, the Supercomplication was delivered during the throes of the Great Depression. By 1936, with the nation in economic turmoil, Graves found himself deeply troubled over the news of the Lindbergh baby kidnapping and fearful of any public attention. At one point he considered selling the Supercomplication but dropped the idea. While boating with his daughter Gwendolen on Saranac Lake in the Adirondacks where he maintained his Great Camp, Eagle Island, Graves threatened to toss it overboard, saying “notoriety brings bad fortune” and possessing such a luxury “brought nothing but trouble.” His quick thinking daughter talked her father down and wisely kept the watch, later giving it to her son Reginald “Pete” Fullerton, Jr.

While the watch had many suitors through the years, including the Stern family, owners of Patek Philippe that had maintained its own significant collection—much of which is on view at the Patek Philippe Museum in Geneva—the Supercomplication stayed with the Graves family until 1969.

In a strange turn of events, just days after his mother’s death, Fullerton unexpectedly sold the watch to Seth Atwood, an Illinois industrialist for $200,000 (equal to more than $1.2 million today) — in cash. Atwood, who had his eye on the piece for years had put together one of the most important collections outside of the British Museum and opened his Time Museum in his hometown of Rockford.

Thirty years later, Atwood, then 81 years old, decided to shut down his Museum and to the astonishment of the watch world sold off his extraordinary collection, including the Supercomplication at Sotheby’s in New York.

The winning bidder turned out to be Sheikh Saud Bin Mohammed Al-Thani of Qatar, the second cousin of the then ruling Emir and one of the world’s most rapacious art collectors. In the fall of 2012 however, news broke that Al-Thani allegedly owed some $42 million to Sotheby’s and had put up 240 items worth about $83 million to clear the debt. A six-page Sotheby’s Financial Services Inc. document revealed that Al-Thani had pledged the Supercomplication along with works of art, jewelry, antique books, and several timepieces. The trove included an Imperial Faberge Egg, Cartier diamond worry beads, and a 2.3-carat Harry Winston blue-diamond ring. [Updated 11/10: Sheikh Al-Thani died suddenly Nov. 9th in London. He was 48.]

For a year and a half the watch sat in a bank vault as the particulars over its sale were bandied back and forth. While Sotheby’s ultimately prevailed in winning the auction, Daryn Schnipper, Sotheby’s head of international watches says “it was competitive,” refusing to comment further on the process or whether the Sheikh has cleared his alleged debt to the auction house, offering, “I can’t discuss financial arrangements.”

For next week’s sale in Geneva, a number of other questions are at hand. Chief among them: how high will the watch go? And will it break its own record? Among dealers, collectors and experts, the Supercomplication is expected to exceed the $15 million low estimate. Yet, there are numerous variables and unknowns. For one, no timepiece has come close to the $11 million paid for the Supercomplication 15 years ago. Then there is the question of who will bid on it. Among potential candidates, the Patek Philippe Museum pops up as a top contender. It lost to the Sheikh last time out, but the watchmaker has not indicated an appetite to go another round at auction. And while the pool of collectors who could reach deep into their pockets remains small, that pool of global billionaires has greatly expanded since 1999, which leaves open the distinct possibility of a wild card entering the race. For its part, Sotheby’s remains tightlipped.

One clue however is the symbol in the Sotheby’s catalogue indicating that the Supercomplication is “guaranteed property.” In the Kafkaesque parlance of auction house rules, this means the seller of the watch is guaranteed a minimum price for the sale either through Sotheby’s or jointly with a third party. In other words, Sotheby’s has a financial position on the watch, which is also subject to a reserve, a confidential minimum hammer price “established between Sotheby’s and the seller and below which a lot will not be sold.” This means, in the event the watch does not sell at auction, Sotheby’s will return the piece to its inventory and likely offer it privately to its top clients — quite possibly below its low estimate. While not uncommon in the auction world, it’s a scenario that’s rarely discussed publicly.

When the hammer lands one thing is certain: in this era of disposable digitization, the sale of the Supercomplication represents something far more enduring than a glittering trophy for a new generation of power and wealth. It is a ticking illustration of timeless ingenuity.

Stacy Perman is the author of A Grand Complication: The Race To Build The World’s Most Legendary Watch. Her profile of watchmaker Patek Philippe appeared in the June 16, 2014 issue.