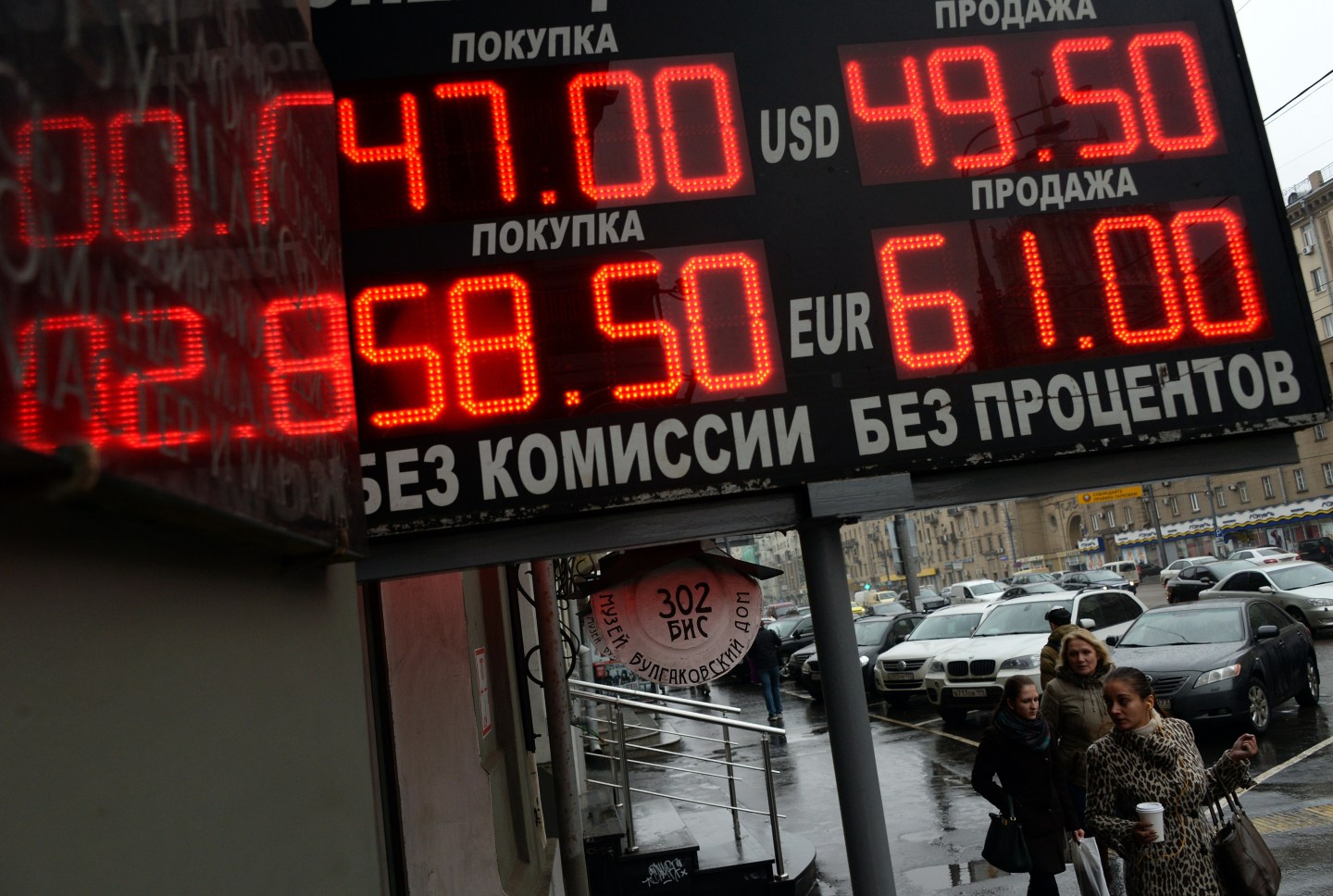 Pedestrians walk under a board listing foreign currency rates against the Russian ruble outside an exchange office in central Moscow, on November 7, 2014. The ruble on November 6 slid to new lows of over 46 to the dollar and 58 to the euro, which gained more than two rubles in one day. The euro reached 58.11 rubles after the market closed Thursday, up from 56.08 rubles the previous evening. The dollar rose to 46.77 rubles from 44.95 rubles late November 5. The Russian currency has fallen in value by about a quarter this year despite a number of interventions by the central bank costing billions of dollars. AFP PHOTO / VASILY MAXIMOV (Photo credit should read VASILY MAXIMOV/AFP/Getty Images)
Photograph by Vasily Maximov — AFP/Getty Images

The conflict in Ukraine erupted into life again Friday after a shaky two-month ceasefire, as Kyiv accused Russia of sending 30 tanks and 32 other army vehicles across the border into provinces held by pro-Russian rebels.

In Moscow, President Vladimir Putin informed the Russian National Security Council of a “deterioriation in the situation” in Ukraine “caused by repeated violations of the ceasefire by Ukrainian armed forces.” Ukraine, meanwhile, claimed it had killed up to 200 rebels in the last 24 hours while 21 of its own soldiers were killed or wounded.

The news has triggered another violent wave of volatility in the two countries’ currencies, as people and banks in both countries rushed to convert local money into dollars and euros. The dollar raced 4% higher against the ruble to a new record high of 48.62 rubles before snapping back to 46.30 by late trading in Moscow.

However, the Ukrainian central bank, which has less than $12.6 billion in foreign reserves left to defend its currency, was forced to let it slide below 14 to the dollar, to within 3% of a new all-time low.

The Russian central bank, which had abandoned its policy of limited interventions to slow the ruble’s fall earlier in the week, put out a statement saying that it saw no fundamental economic reason for the ruble to fall further. It said it was ready to intervene “at any moment” to counter what it said were “signs of speculation that could form a risk to financial stability,” but local media reports made no mention of direct intervention on the market on Friday.

“The ruble has become unhinged and CBR intervention is both needed and warranted,” Sberbank chief economist Yevgeny Gavrilenkov wrote in a note to clients.

Russia still has one of the world’s biggest stashes of foreign exchange reserves, with over $420 billion, but the Central Bank spent $30 billion in October alone in order to defend the ruble–to little effect. It’s now lost 30% of its value against the dollar since the start of the Ukraine crisis in February.

The ruble’s fall has accelerated in recent days against a backdrop of increased anecdotal reports of ordinary Russians switching their savings into dollars and euros wherever possible. That’s adding to pressure caused by companies buying dollars in order to repay foreign debts that are falling due. But after weeks of steady ruble declines, figures such as former finance minister Alexey Kudrin now say it’s close to an “equilibrium” rate in line with fundamentals.

But that doesn’t mean that it won’t overshoot before it regains its balance. Most markets do, after all. The most obvious threat is that a renewal of fighting in Ukraine will lead to more U.S. and E.U. sanctions and more economic pain. Paul Gregory at the Conservative Hoover Institute think-tank in Washington thinks that after the Republicans’ landslide win in this week’s mid-term elections raises the chance of Congress voting through military aid to Ukraine, something that would infuriate the Kremlin and escalate the crisis still further.