The non-politicians who profit from Election Day 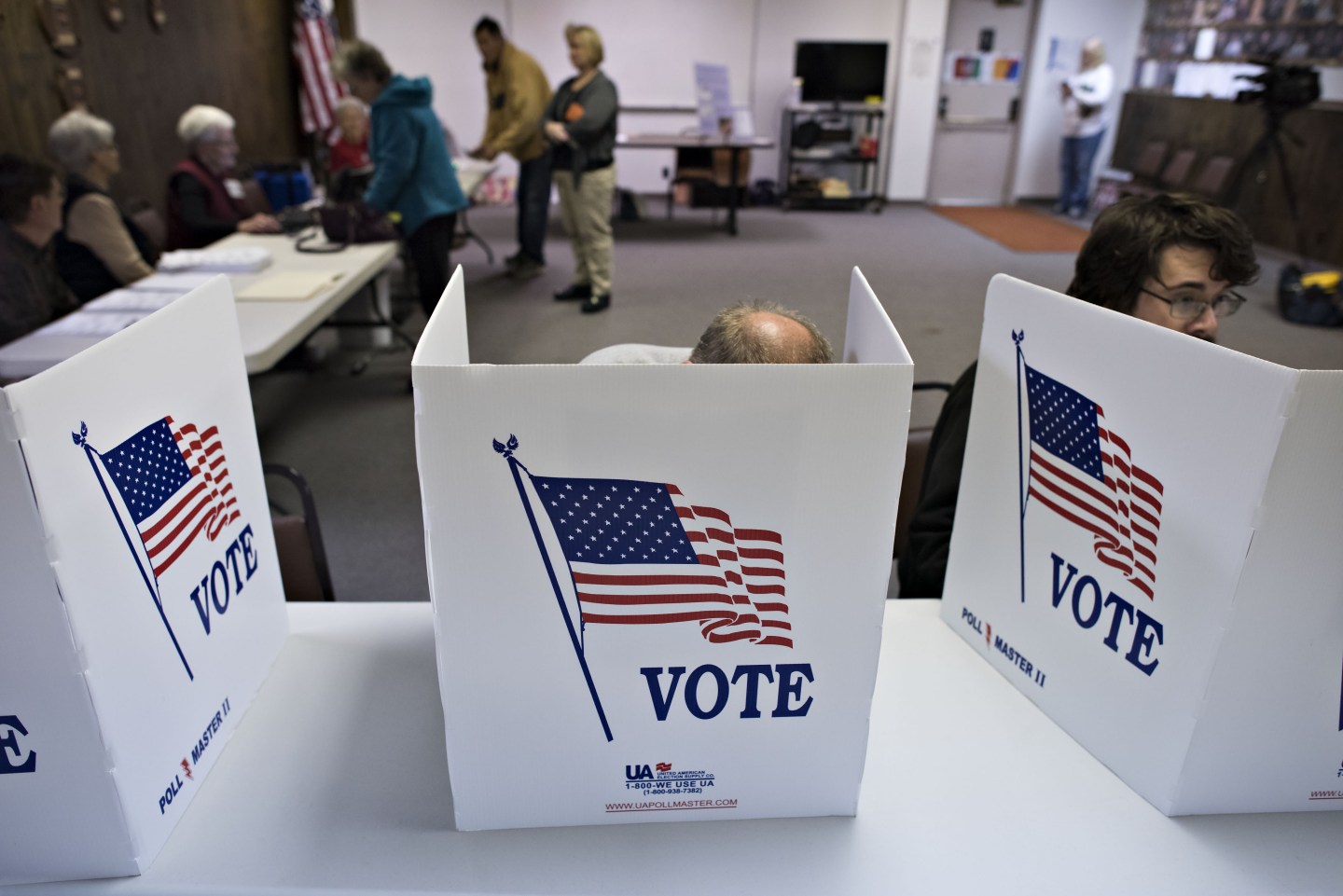 Voters cast their ballots in the U.S. midterm election at the Red Oak Fire Department in Red Oak, Iowa, U.S., on Tuesday, Nov. 4, 2014. In Iowa, where Republican Joni Ernst and Democrat Bruce Braley are in a close Senate race, more than 431,000 had already cast ballots by the end of the weekend with total voting expected to exceed 1.1 million. Photographer: Daniel Acker/Bloomberg via Getty Images
Photograph by Daniel Acker — Bloomberg via Getty Images

The winners of the 2014 midterm elections will be revealed tonight after the polls close and the votes are tallied — or, at least, the political winners will be. But there are ways to for non-politicians to cash in on Election Day, and we’re not talking about bribery or other suspicious activities. Below are some of the people and companies who profit from your patriotic duty.

The obvious group to make money off of Election Day are those whose work focuses on the day itself, like the landlords, movers, printers and poll workers who make Election Day run. According to Thomas Connolly of the New York State Board of Elections, New York counties spent a little over $1 million to rent sites to become polling places during the primary and general elections of 2010, the last midterm election. (This figure does not include municipal buildings or schools, which incur no charge.) Rents vary by county, but your local church or assembly hall is likely getting a bump in its bank account to open its doors for the day. In addition, there's the cost of getting those voting machines in and out of the polling sites. In 2010, New York State spent a total of $4.7 million dollars to get the voting machines to various church basements and back. And then there's the ballots themselves -- New York State spent $11.4 million printing up election day and absentee ballots for the 2010 general election.

And what about the workers who check you in that day? New York State spent $15.8 million on poll worker salaries during the primary and general elections of 2010. Compensation varies by county, but according to Anthony Nasti of the New York City Board of Elections, a poll worker in the boroughs will pull in a cool $200 for today's work.

More than 40 pallets of Ballots were unloaded from a truck at the US Postal facility October 15, 2014

The United States Postal Service's volume increases during election quarters based on both absentee ballots and direct mail advertisements from campaigns. For instance, 2014 is Colorado's first election with mail-in ballots only and, according to Zy Richardson of the USPS, Colorado registered voters received more than 3.5 million ballots. "Current projections are indicating a strong 2014 midterm political season as we have already surpassed political mail volume from the 2010 cycle." says Richardson.

The market for voting machines is dominated by a few monster companies in the market, notably Omaha-based Election Systems & Software (ES&S) and Denver-based Dominion Voting. (Diebold, the company whose machines famously had issues during the 2002 election is no longer in the U.S. voting game, having sold off its Premier Election Solutions division to ES&S, which, in turn, was forced to divest that division by the Justice department in 2009 citing anti-trust concerns. Premiere Election Solutions's primary assets were then sold to Dominion Voting.) Howard Cramer, the Executive Vice-President, Government Relations for Dominion, estimates that his company has about 1/3 of the voting machine market. "We are somewhat unique in that this is all we do," he says. But don't try to estimate the size of the election market based on SEC filings: Dominion is a privately held company, and ES&S is fully owned by Omaha-based private equity group McCarthy Capital.

According to Connolly at the New York State Board of Elections, scanners throughout the state cost between roughly $7,200 to $13,500, depending on the brand and whether or not the machine has all the necessary accessibility hardware. In New York State, ES&S machines are used in Albany, Erie, Nassau, Rockland, and Schenectady counties, as well as all of New York City. Dominion machines are used in every other county in New York.

DES MOINES, IA - DECEMBER 27: Dozens of televisions display a political advertisement supporting Texas Governor Rick Perry at the American furniture electronics and appliances store December 27, 2011 in Urbandale, Iowa. With the Iowa Caucuses a week away, the Republican candidates and their super PACs have spent $10 million on television and radio spending in Iowa this month. Perry leads the pack with $2.86 million in December alone. (Photo by Chip Somodevilla/Getty Images)

The companies that will likely see the biggest bonus from this election are your local television stations and the media conglomerates that own them. Tight Senate races in Alaska, Kentucky, North Carolina, and other states have poured ad dollars into stations in Anchorage, Louisville, Charlotte, and other major local markets. According to the Washington Post, Iowa station WHO-DT, owned by Tribune Media, even replaced syndicated show "Ellen" with an hour-long political show in order to run more election ads. Anchorage, Alaska's KTUU, owned by privately held media company Shurz Communications, has been the single biggest beneficiary, according to the data from research firm Kantar Media and cited by the Post. And it's not just the candidates themselves spending the money. Outside groups are buying up quite a chunk of airtime in those markets, often to present ads attacking their non preferred candidate.

It looks like the gravy train might continue past Election Day in two states. Georgia's election rules call for a run-off in January if the top candidate receives less than 50% of the vote. One conservative group has already bet on that happening and reserved $600,000 worth of airtime in the Atlanta media market post-Election Day. Louisiana has similar rules, and according to the Wall Street Journal, the National Republican Senatorial Committee has already reserved airtime before that state's expected December runoff.