The boo-tiful business of ghost tourism 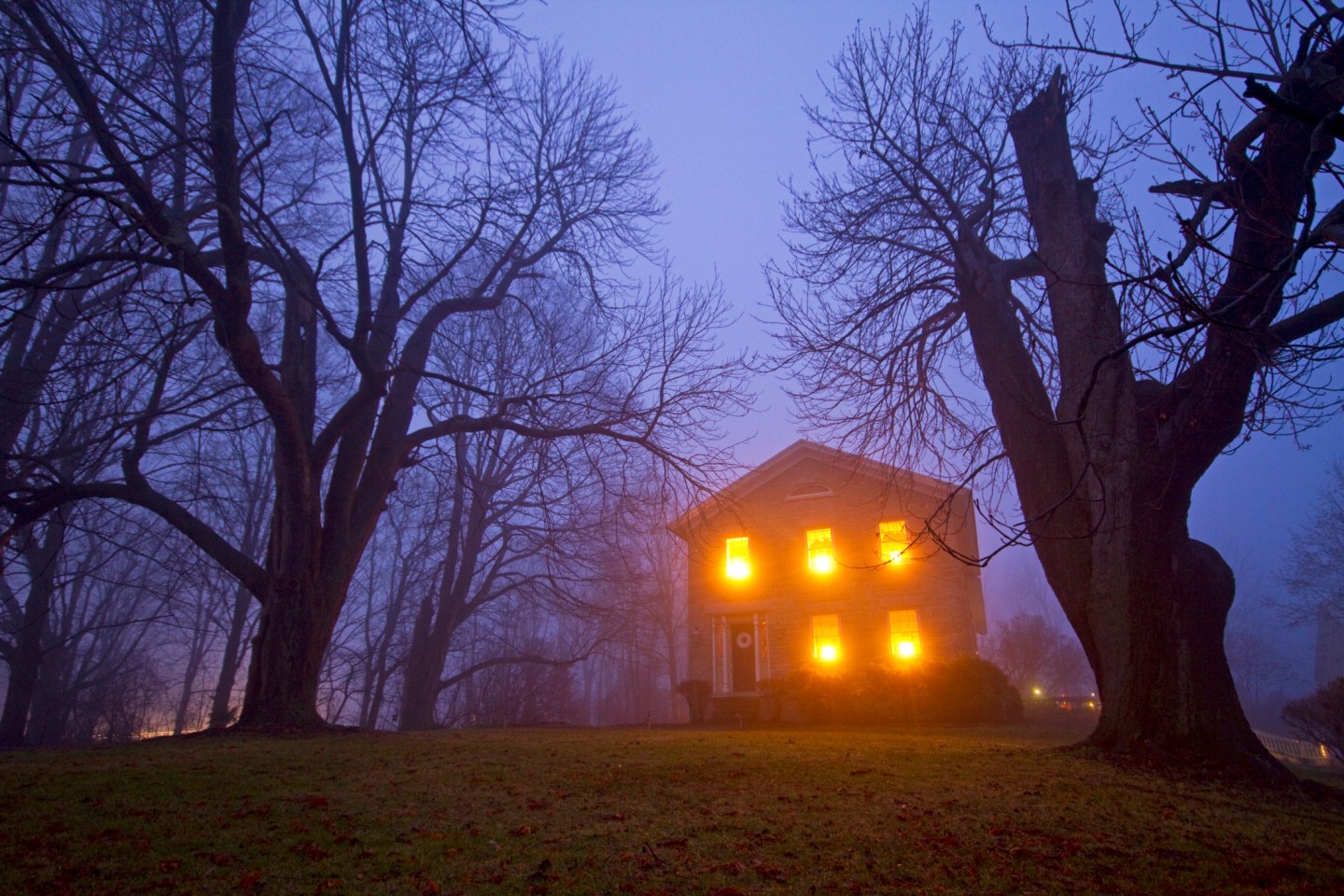 When most people hear about the ghosts of Wall Street, it’s fallen titans of industry, specters of deals gone awry, or business barons of the past that come to mind.

“There are many ghosts on Wall Street,” said Dinkelmann, the entrepreneur who runs the Wall Street Walks Ghost Tour throughout the month of October. “Fraunces Tavern has many ghosts,” said Dinkelmann. “They’ve had murders there that have left many ghosts. There are several ghosts in the Battery Park area and, of course, the ghosts in the cemetery. Alexander Hamilton is one of them. He’s seen at the Trinity Cemetery where he is buried as well as up at City Hall.”

Dinkelmann’s deep knowledge of the history of Wall Street and the many specters that creep along its tight walkways have people ponying up $25 each for her history-laden walking tours. Each Friday and Saturday night in October, Dinkelmann meets with a group eager to hear her insider’s knowledge of Wall Street’s Most Haunted.

She points out the spot where desperate men jumped out of the building outside the Stock Exchange after the Wall Street Crash of 1929. She takes groups over to Trinity Cemetery to admire the location that is haunted not only by President Hamilton, but in the great injustice of the afterlife, also by his killer, Aaron Burr (who has also been known to rock the dinnerware of nearby restaurant One If By Land, Two If By Sea).


Dinkelmann added the popular Ghost Tour three years ago after repeated requests from visitors. The tours add an additional revenue stream to the income she makes from her regular Wall Street Walks tours. To join the tour, no special equipment is necessary, because as Dinkelmann says, “It’s not ghost hunting.”

If you want ghost hunting, there’s a different tour for that. The business of ghosts extends far beyond Wall Street.

Mercedes Carrabba has been running the Market Ghost Tour in Seattle for 12 years, picking up on the ghost tours started by her father in the 1980s. Carrabba, who claims she has had “experiences” with the supernatural all her life, saw an unfulfilled niche in the market and started running her ghost tours just in September and October. “Within three years we were doing it six months. In four, we were doing it all year long,” she said.

The Market Ghost Tours run all year, but see an uptick in sales in August when tours flood Seattle and October when the public becomes supernaturally minded. But in order to sustain her business year-round, Carrabba’s company also runs Ghost Alley Espresso where all the baristas are “cross-trained” as supernatural tour guides “so they have a job all year long,” said Carrabba.

For $22, the Market Ghost Tours take amateur afterlife sleuths on a “private investigation” of a haunted location around Seattle’s famed Pike Place Market. They use “standard ghost hunting equipment,” according to Carrabba, which includes “K2 Meters, video recording, photographs and trigger objects” to hunt for the supernatural. (For those not up on their ghost hunting vocabulary, according to Carrabba, a “trigger object” is “something related to the haunting to encourage interaction, if it’s a child a small toy or something related to the story.”) She has relationships with businesses in the area that have known hauntings that allow her groups to come in and set up investigative shop. “A lot of the businesses we work with are restaurants, so it’s a cross-promotion. We’ll book parties at restaurants or end our tour in a known haunted bar that we have a relationship with.”

Restaurants aren’t the only businesses cashing in on their supernatural credentials. Estes Park, Colorado’s Stanley Hotel, best known as the hotel that inspired Stephen King’s and Stanley Kubrick’s The Shining, offers a “Ghost Adventure” package starting at around $283/night, which includes a classic queen room on the hotel’s supposedly haunted 4th Floor, a K2 Meter, a glow-in-the-dark Stanley Hotel squishy ghost and a REDRUM mug. The enterprising hotel also runs a ghost tour of the hotel’s property for $20 per guest ($25 for non-hotel guests) and a $50 Paranormal Investigation and Ghost Hunt tour that will guests searching for paranormal experiences.

Other hotels make the most of their reputations, as well. The website for Myrtles Plantation in St. Francisville, La., proudly declares it is “one of America’s most haunted homes” thanks to the presence of Chloe, a now-spectral slave killed on the property. Hotel Del Coronado in Coronado, Calif., recently published a book documenting its haunting, called Beautiful Stranger – The Ghost of Kate Morgan. For $24.95, the curious can read the dark history of the mysterious woman who checked in to the hotel in 1892 and never checked out. The truly adventurous can also stay overnight at the infamous Lizzie Borden House.

Ghost tourism is its own cottage industry that stretches from coast to coast. San Diego’s Whaley House, home of the city’s first public gallows, runs ghost hunts for $50 per investigator with extra-spooky activities running throughout the month of October. Pennsylvania’s Eastern State Penitentiary is a boon for amateur and professional ghost hunters alike. The crumbling prison’s Halloween activities even have corporate sponsors, including the expected (Spirit Halloween stores) and the unexpected (Peanut Chews).

While supernatural attractions are cashing in on the public’s interest in the paranormal, the actual business of paranormal investigations, isn’t really a business at all: “It’s a very expensive hobby.” At least according to Angela Artuso, director of the Gotham Paranormal Research Society, whose team of researchers and investigators don’t charge for their services at all.

The Gotham PRS is a not-for-profit organization that is also a member of the TAPS family (that’s The Atlantic Paranormal Society’s network founded by Ghost Hunters stars and part-time plumbers Jason Hawes and Grant Wilson). Gotham PRS’s team — which is made up of teachers, medical personnel, an attorney, police officer, CPA, an audio specialist, historian, mediums, and a professional photographer/film maker — all volunteer their time, because, according to Artuso, “they love history, the paranormal and helping others. “

“We’re here to help,” said Artuso. “We never charge, we just want to help people make sense of what is happening in their homes or businesses. We just want to find answers and help people feel safe in their homes.” Not that a haunting would stop prospective homebuyers from buying—a recent survey revealed that 62% wouldn’t let a paranormal presence curb their enthusiasm for real estate.

“A frightened family with small children will call us, and we’ll investigate,” said Artuso. “Nine times out of ten, there’s an explanation and we can bring peace to the family and give them some comfort that they’re not going crazy. It helps them. Occasionally we can’t find an explanation and that’s what we chalk up to a paranormal event. What we consider success, though, is helping a family feel safe.”

It’s that sense of service — to both the natural and the supernatural — that seems to motivate most paranormal investigators. “We want to help the souls that are stuck, but we more want to educate people that most ghosts are not demonic — a lot of times they just want help,” said Maija Polsley, who founded Paranormal Pursuit with her sister, Amanda Villegas. They started doing investigations together about three years ago, but had what Polsley calls “experiences” their entire life since growing up with a ghost in their childhood home.

While their investigations keep them busy, heading out a few times a month for hunts, it is not a profitable pursuit. “We don’t charge anybody, ever, for investigations,” said Polsley, but she does want to make investigations her full time job. For Polsley, the dream is a reality show where she and her sister could hunt ghosts and investigate paranormal phenomenon in prime time. She and her sister have a web series that documents their investigations and she hopes it will translate to a TV show or at least create a revenue stream that would let her quit her job as a cocktail waitress. “It would be great to get picked up. It would be great to be able to do this as a main source of income,” said Polsley. “Nobody has two sisters!”

She estimates that she has spent about $15,000 on equipment to give their web series a professional polish. But Polsley doesn’t think the amateur sleuth needs to throw down that kind of cash. “Flashlights are great,” said Polsley. “And everyone has a camera. My sister captures spirits all the time on her camera.”

For those looking to go beyond flashlights and cameras, Walmart (WMT) sells a Ghost Hunting Kit “designed for intermediate paranormal researchers,” complete with a Trifield Meter, Portable Motion Sensor, EVP Listener, Digital Local Remote Thermometer, and a Laser IR Thermometer.” It’s currently marked down to $323.78 and comes in a professional looking black-and-metal briefcase. (For couples looking to spice up their free time, Wal-Mart also sells a $319 Couples Ghost Hunt Kit for twice the specter-chasing action.)

Professionals might want to head to a specialized retailer, though. Ghosthunterstore.com sells white sage wands, a medal of St. Benedict and something called “The Vortex Dome”, a $75 gadget that creates a “static e-field that “spirits can easily manipulate” as a means of communication. Over at GhostStop.com, alongside EMF readers, Ghostbusters –branded gear, and a $999 modified full-spectrum GoPro camera that gives 360-degree photographic coverage, the company sells something called a “spirit box.” As seen in the hands of the Ed Hardy-wearing stars of the Ghost Adventures television show, the $229 digital recorder was “developed for paranormal research” to collect even the subtlest ghostly vocalizations.

The entrepreneurial site also includes a form for inventors to sell their own ghost-hunting gadgets, after all, there’s nothing spooky about making a profit. Surely, the Ghosts of Wall Street would approve.