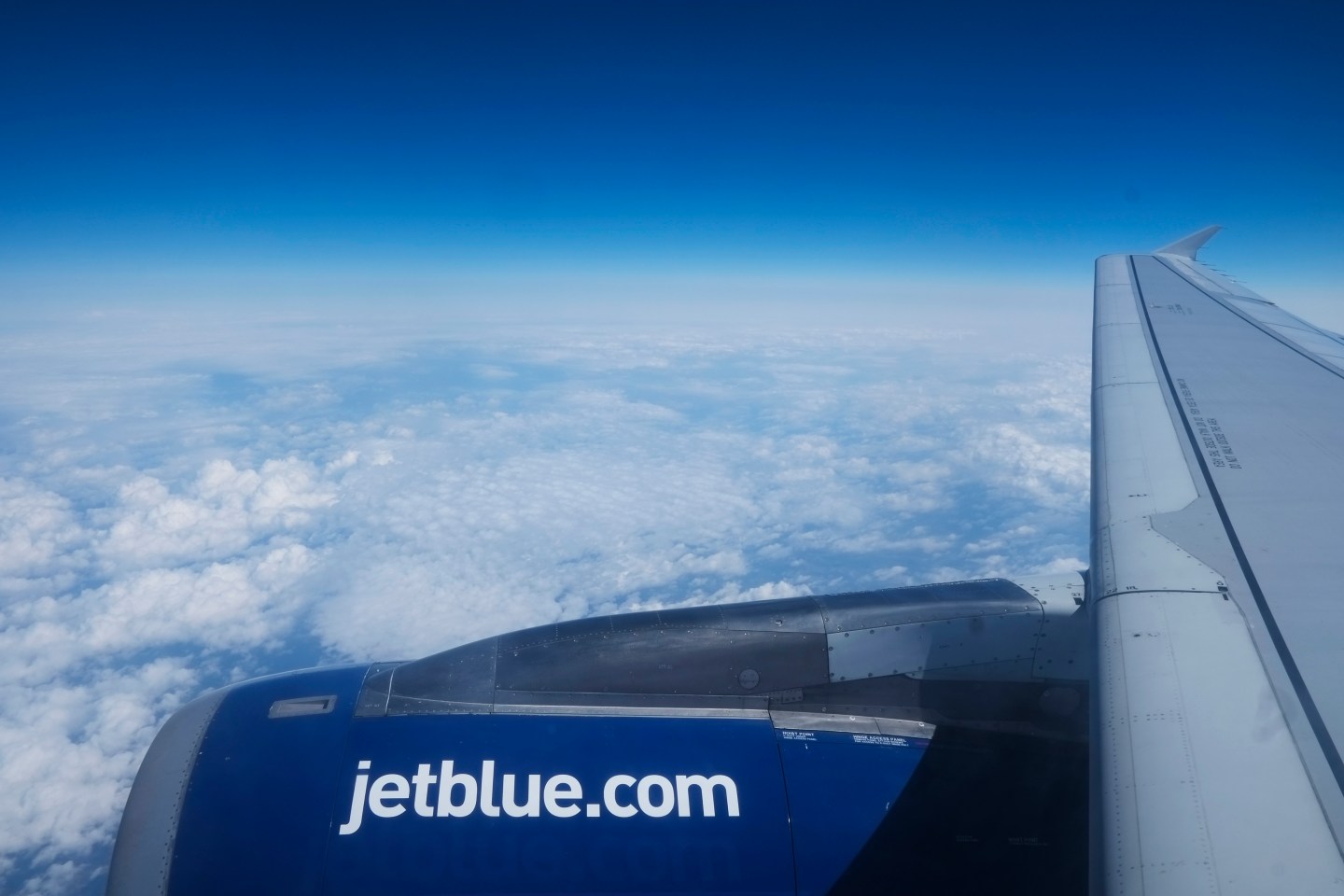 A JetBlue plane flies May 1, 2014 in flight over the United States.
Preston Rescigno Getty Images

Flying can be an unnerving experience, and sometimes there’s nothing you can to do except kick back and have a drink. JetBlue (JBLU) clearly understands this, and wants to make their service better for people who favor grapes over grains. The airline is the latest to bring in a wine guru, hiring Jon Bonné as its in-house wine expert for its premium Mint passengers. Mint is a recently introduced business class service that includes a lay-flat seat and a personal suite, with a door, for flights from New York’s JFK airport to Los Angeles and soon to San Francisco. Bonné, a veteran journalist who grew up around wine, is the wine editor at the San Francisco Chronicle and the author of the book “The New California Wine.” He chatted with Fortune about the best way to enjoy a glass in the air.

Fortune: When people think of airlines, they don’t often think of fine wine. How do you fix that?

Jon Bonné: When JetBlue came to me, that was exactly my point of view. I’m in the air a lot. I often feel like I’m on an airplane more than off of it. Honestly, and I can say this only because I was not really flying JetBlue for these flights — I wouldn’t drink wine on board. I was the wine editor of the Chronicle and I would get on board and drink whiskey and Bloody Marys. Beverage-wise, I wanted to capture airlines in their strong points, and wine wasn’t one of them.

I was not convinced that there was a way to do wine on board correctly, or at least in a way that lived up to what I wanted it to be. JetBlue was willing to really start with a blank slate in terms of how you put together a program. They were willing to spend some real money on it, to reach out to much smaller producers to get them on board. It doesn’t have to be the way its been. There are lots of chances, frankly, for people to be delighted by what they drink onboard.

What are some of the things you have to change about how airlines approach wine?

The big one is cost. Typically airlines want to spend almost nothing on their wine, so what you end up with is essentially almost the leftovers: the things that a distributor was willing to part with, or a winery had a wine they couldn’t move. One of the things we did was say one, can we spend more money than typically people have and two, can we try when its possible to work directly with the wineries. We found ways that we can often do that. JetBlue likes to work with smaller producers. When it came to wine it was this question of: “Assuming we don’t have to do it the way its been done before, how to we get them connected with smaller wineries that frankly have never really had the option or potentially the interest in working with an airline program.”

Wine and food taste different at 30,000 feet. How does that affect the wines you choose?

There’s definitely differences, and you lose some of the highs and lows in terms of your palate. You don’t tend to want extremely subtle taste, you don’t tend to want extremely high acid or high tannin. I was thinking about wines that would be a little bit fruitier, maybe a little bit softer on the palate. I would be more hesitant to serve earthier, more sort of savory wines. More than anything in terms of how you deal with it, you look for really good quality wines, because I think people tend to focus on how do things taste different in the air, but a really good wine is still going to taste pretty good.

Whats an example of a wine that didn’t work in the air?

I remember I was in business class on a different airline and they were serving a Rioja, which was actually a great selection conceptually, but the tannins in Rioja were accentuated even more.

And what about a few of the wines you’re excited to have Mint serve?

The Birichino Malvasia that they’re going to have on board is a great example. There’s a little bit of sweetness in it, its a very exuberant, aromatic wine. The wine that was really a big get for us was to get Turley’s Zinfandel on board for the debut menu. Its a big, fruity wine. Its got a lot of flavor to it.

I think airlines, and reasonably enough tend to be very conservative. They’re worried that if you don’t have a Merlot on board, or if you don’t have a Chardonnay, that your customers will revolt, because they have to have their thing. JetBlue is an airline that is interested in a specific type of customer, and they want customers who are a little more adventurous, folks who aren’t necessarily looking for the same experience that they’ve gotten on other airlines.