Is this city the next Brooklyn? It’d rather not be. 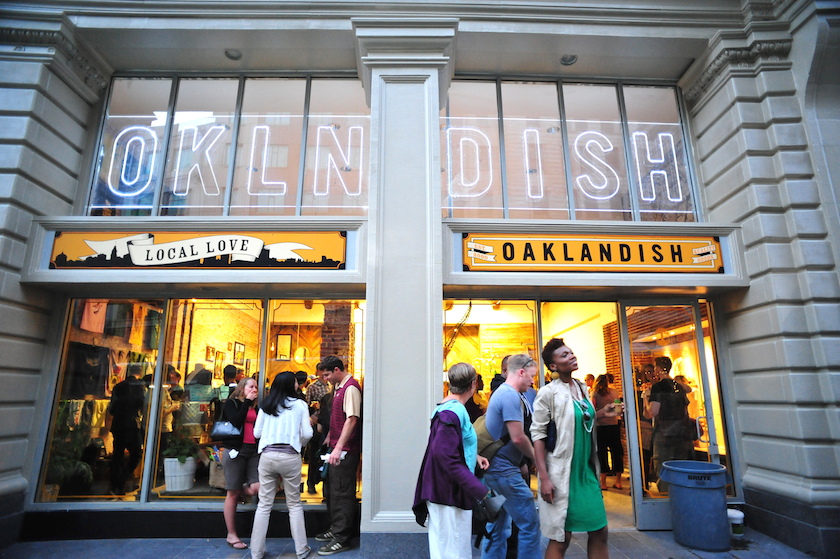 In 2011, Richard Stump and his business partner Michelle Mihvec started looking for a larger space for Fathom, their fledgling 3-D printing business. The company, which was founded in 2008, had been operating out of Mihvec’s garage in San Ramon, Calif. at the time.

They looked at San Francisco and Silicon Valley, but considering the space the pair needed for their large printing equipment, Fathom was priced out of both markets.

In addition to space, top on their wish list was “low cost” and “access to creatives,” Stump says.

He and Mihvec finally settled on Oakland, Calif.

He’s just as happy with his company’s new city. “For us, specifically, it offered a lower cost for our facility and offered access to creatives. It’s a nice location: not far from Sacramento, close to San Francisco,” he says. “Oakland in general is really an up-and-coming area. Just in the last two years, we’ve noticed new restaurants and nightlife. But a lot of it comes back to economics and being affordable.”

The characteristics of Oakland that drew Stump to the city seem to be aiding other small businesses as well. With $5.6 million in revenue in 2013 and a five-year growth rate of 1785.62%, Fathom landed at No. 2 on this year’s Inner City 100, a ranking of the fastest-growing inner city companies in the U.S. from the Initiative for a Competitive Inner City. It’s joined on the list by six other Oakland businesses: Revolution Foods, a school lunch provider; Oaklandish, which designs and sells civic pride apparel; Arcsine, an architectural firm that serves hospitality, commercial, and residential clients across the country; organic food company Premier Organics; Blaisdell’s Business Products, which supplies companies with office products and furniture; and Veronica Foods Company, which sells olive oil, balsamic vinegar, and other gourmet food items. With seven winners on this year’s Inner City 100, Oakland was second only to Chicago, which had 13.

Chicago has been the Midwest’s dominant city for quite some time. But for Oakland, the number of small businesses with stellar growth is indicative of a larger trend in a city that’s always stood in San Francisco’s shadow. Oakland, it seems, is finally having its own modern moment.

“There is a chip-on-your-shoulder feeling in Oakland, as if it’s the second city,” says Chris Rhomberg, a professor of sociology at Fordham University and author of the 2004 book No There There: Race, Class and Political Community in Oakland. “I think that it’s finally coming around.”

Why, exactly, is this happening now? Certainly, the factors that drew Stump and Fathom to the city play a big part.

“Oakland has always been relatively less developed or behind San Francisco, but its advantage is that it’s still in the Bay Area and has a relatively affluent consumer market and an educated workforce,” which is attractive to business owners, says Rhomberg. The median household income in Oakland was $51,683 from 2008 to 2012, according to the U.S. Census, just below the national median of 53,043. Unemployment there was 9.4% in August, according to the Bureau of Labor Statistics, down from a post-recession high of 17.6% in July 2010 but still above pre-recession lows that neared 6% and September’s national average of 5.9%. The city’s location makes it accessible by car, ferry, bike, and public transport. “Being able to commute to Oakland is a real advantage to employers in need of a workforce,” Rhomberg says. Plus, it’s now serving as a catch basin for spillover from San Francisco, where a tech boom is fueling sky-high rents.

But does all credit go to the city’s location, transportation options, and its current role as a safe harbor from San Francisco‘s outrageous prices?

Certainly, there are other factors at play.

“We have been a city on the verge for quite some time now. That’s the only way to explain what’s happening now,” says Barbara Leslie, president and chief executive officer of the Oakland Metropolitan Chamber of Commerce. But when she gets down to the nitty gritty, Leslie points to one policy in particular that was developed more than 15 years ago. Mayor Elihu Harris, who left office in 1999, supported adding more housing to Oakland’s downtown as a way to draw more residents to the area. His successor Jerry Brown, now the governor of California, took up that idea with his 10K Plan, a strategy to draw 10,000 new residents to the city by building 6,500 apartments and condos.

At the time of the plan’s inception, Oakland was experiencing what Leslie calls “leakage.” People were working in the city, but they weren’t living there.

Jose Corona, CEO of Inner City Advisors, which provides Oakland entrepreneurs with advice and pro bono investment, says that the small businesses popping up now have come in response to the migration of people to Oakland’s downtown resident real estate. “It’s a case of retail following housing,” he says.

Angela Tsay, chief executive officer of Oaklandish, a retailer of civic pride apparel, says the success of businesses in Oakland is happening in spite of the city’s leadership, not because of it. “Oakland has lacked leadership for a long time,” she says. “Everyone who is succeeding is working hard on their own.” The city’s current Mayor Jean Quan is facing off against 14 other candidates in her bid for reelection and the criticism of her administration reflects some of the long-standing problems that still nag the city: persistent crime, joblessness, poverty, and blight.

Tsay’s business, which sells items like “Oakland Hustlin'” t-shirts, grew out of a guerilla art project she started with her ex-husband in 2000. He and Tsay posted wheat paste posters that depicted the city’s socially conscious past around the city. They set up impromptu drive-in theaters and screened movies and documentaries related to Oakland’s history.

The city has a particularly rich—albeit somewhat controversial—history of social movements. The Black Panther Party grew out of Oakland in the 1960s and was the site of marches protesting the Vietnam war in 1965. More recently, the city was home to one of the fiercest Occupy demonstrations. Starting in October 2011, protestors occupied the plaza outside Oakland City Hall and, over the course of a year or so, often clashed with city police.

It’s that socially conscious past that Tsay says has influenced Oakland’s current business climate. “Oakland has always been the underdogs in the Bay, and that breeds a certain resiliency and scrappiness,” she says. Those sentiments motivate the city’s residents to support their own. “Oaklanders really value locally made products and small businesses. They understand that the economic impact of shopping at a local store as opposed to a big box store and the implications that has for jobs and the community,” she says.

That consumer outlook, paired with wealthier residents spilling into the city from San Francisco, has spelled good news for small business.

Oakland’s ongoing economic resurgence, its role playing second fiddle to The City by the Bay, and its cheaper rents have drawn comparisons to Brooklyn. Some Oaklanders, however, aren’t thrilled with the association. Why? “I’m not exactly sure,” says Leslie. “Oakland wants to be different,” she says. It wants to do its own thing.