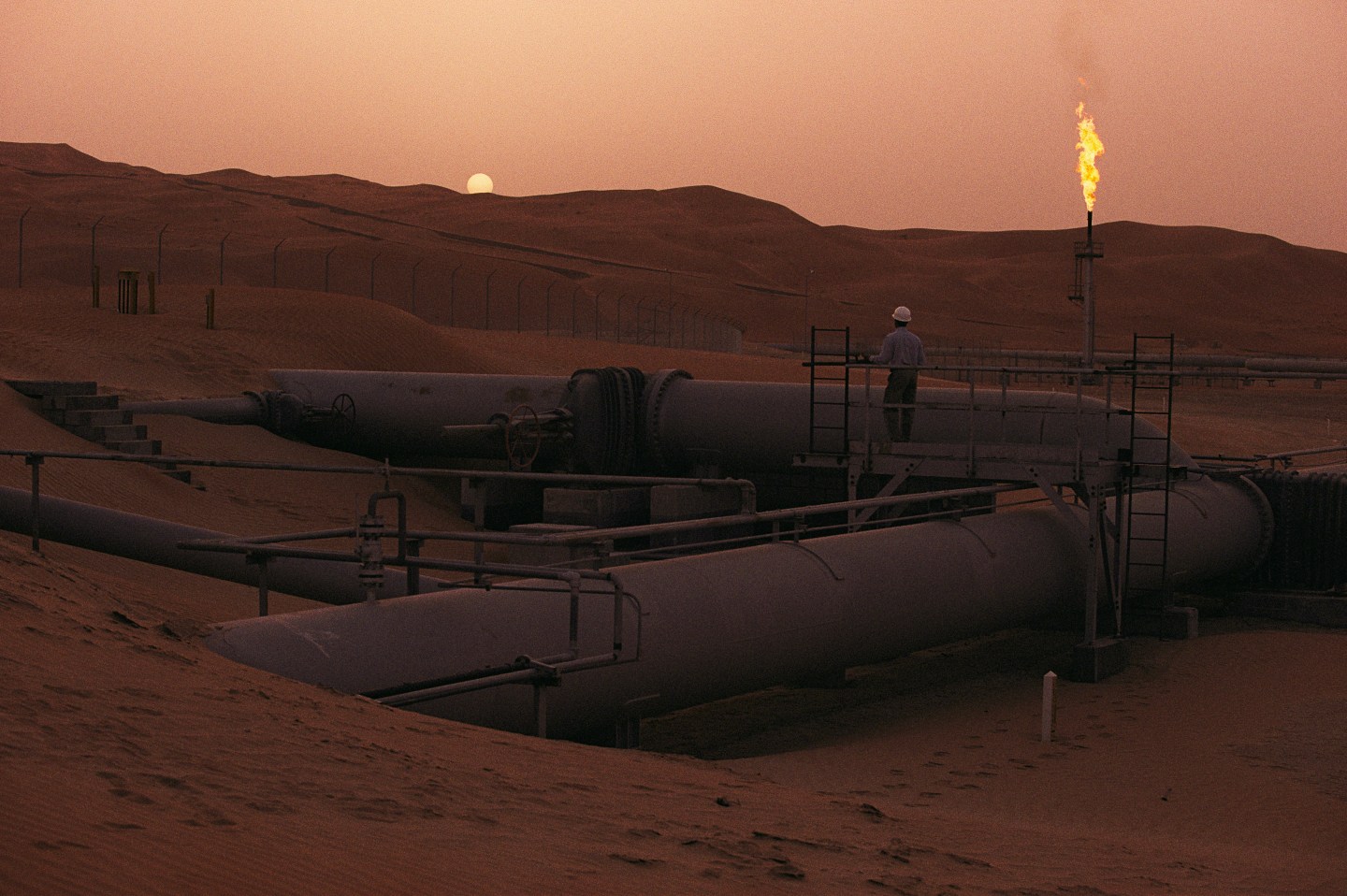 The price of crude oil fell to a new three-year low Monday as a split between the world’s most important producers on how to share the pain of lower prices becomes increasingly apparent.

Prices for the U.S. and European benchmark blends nearly 2% in early trading Monday, on a Reuters report suggesting that Saudi Arabia was willing to accept a price of as low as $80 a barrel for the next year or two, in order to defend its share of the global market. The New York Mercantile Exchange’s crude contract traded at $84.65 by 0700 EDT, down from a peak of over $107 a barrel as recently as June.

Saudi Arabia is the largest producer in the Organization of Petroleum Exporting Countries, the cartel which produces a third of the world’s oil supply and essentially keeps the balance of supply and demand in the market. As Saudi Arabia can undercut almost every other country if it wants to, it has a huge influence on regulating OPEC’s overall supply.

The price of the world’s most important commodity is under pressure from both directions: demand is weakening as the European and Chinese economies slow down, while global supply is increasing as Iraqi and Libyan exports rebound from war-related disruptions, and the U.S. pumps ever more oil from shale deposits. (The long-term demand outlook is also looking rockier, because of new technologies such as electric cars.)

The sharpest decline in recent weeks was due to Saudi Arabia slashing official selling prices for customers in Asia and Europe signalling that it was prepared to remove the floor for prices for the short term. Iran and Iraq have both followed suit in recent days.

Such developments invariably create tensions within OPEC, whose 12 members have very different agendas.

Venezuela and Iran, two countries which need as high a price as possible to support their budget spending, have both signalled their unhappiness and are pressing for an emergency meeting of OPEC ministers to agree coordinated production cutbacks. A top adviser to the Iranian oil ministry, Mehran Amirmoeini, warned at the weekend about a repeat of the havoc of 1998, when an “inadequate reaction by OPEC” to the Asian financial crisis brought the price crashing down to $8 a barrel.

Saudi and its gulf allies, Kuwait and the United Arab Emirates, have so far appeared unmoved.

Saudi Arabia’s willingness to accept a price war may benefit U.S. and European consumers in the form of lower gasoline prices, but will have big knock-on effects in other oil-producing countries.

It will certainly make life harder for shale oil producers in the U.S., as up to 40% of alternative U.S. oil supplies may be unprofitable at prices below $80 a barrel, according to analysts at Deutsche Bank.

But the chief effects are on other petro-states. Russia, for example, needs an oil price of $114/bbl for its budget to balance this year, and it needs a balanced budget all the more because western financial sanctions mean that it can’t finance a budget deficit by borrowing in international capital markets right now. The ruble hit a new all-time low of 40.438 to the dollar in early trading Monday and has lost 16% against the dollar since July. Against a backdrop of falling revenue, finance minister Anton Siluanov warned last week that the country’s ambitious plans to raise defense spending had become unaffordable.

A spokesman for Russian state-controlled giant OAO Rosneft took a swipe at Saudi “manipulation” of the oil price on Sunday, warning that it would “end badly” for the Kingdom. Saudi-Russian relations have soured over Russia’s support for the Assad regime in Syria. Russia has also grumbled about Saudi sponsorship of radical Islam in its southern republics.