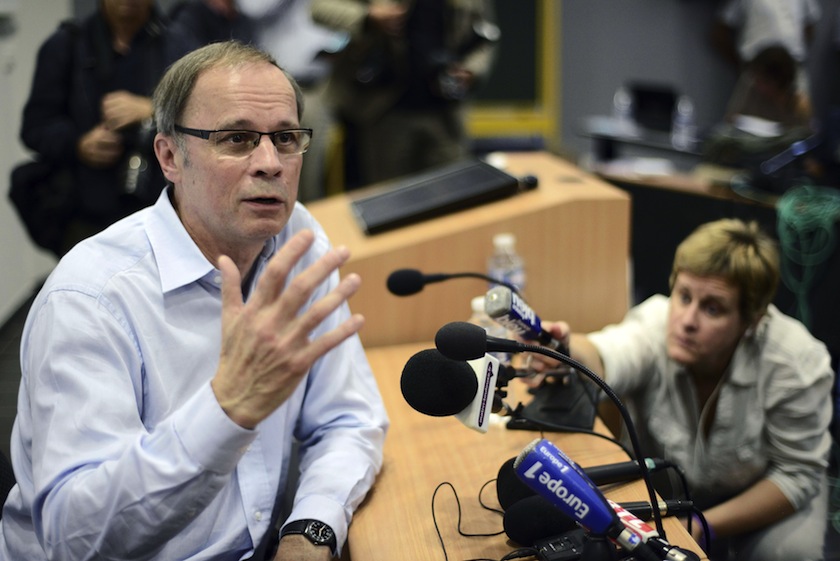 Laureate of the 2014 Nobel Prize in Economics, French economist Jean Tirole speaks during a press conference at the Toulouse School of Economics (TSE) on October 13, 2014 in Toulouse. Tirole is a master of game theory and industrial organisation, who added a Nobel prize to a gleaming heap of honours for his work. The 61-year-old was hailed by the Nobel jury as "one of the most influential economists of our time" for his analysis of big companies, market power and regulation. The professor at the Toulouse School of Economics has long been tipped as a potential winner of the Nobel Economics Prize, largely dominated by economists from the United States. AFP PHOTO / REMY GABALDA (Photo credit should read REMY GABALDA/AFP/Getty Images)
Photograph by Remy Gabalda — AFP/Getty Images

Competition is at the very heart of capitalism: it drives firms to make better products at lower prices, and it gives customers the ability to choose a provider that best serves their needs.

But what about industries in which competition doesn’t result naturally? Take rail transport, for example. It wouldn’t pay for several companies to build competing networks of train tracks going to and from the same cities. The result: we have a government-owned monopoly, Amtrak, that provides commuter-rail service. Another way of handling so-called natural monopolies is to tightly regulate a private enterprise so that it doesn’t use its monopoly for ill. A good example of this might be your local power company.

But regulating these entities so that they are efficient, innovative, and charge fair prices is very difficult. Economists have studied this problem for decades. On Monday, French economist Jean Tirole was awarded the Nobel Prize in economics for his work in this very subject. As the Nobel Committee said Monday in its press release announcing the award:

Before Tirole, researchers and policymakers sought general principles for all industries. They advocated simple policy rules, such as capping prices for monopolists and prohibiting cooperation between competitors, while permitting cooperation between firms with different positions in the value chain. Tirole showed theoretically that such rules may work well in certain conditions, but do more harm than good in others. Price caps can provide dominant firms with strong motives to reduce costs—a good thing for society—but may also permit excessive profits—a bad thing for society. Cooperation on price setting within a market is usually harmful, but cooperation regarding patent pools can benefit everyone. The merger of a firm and its supplier may encourage innovation, but may also distort competition.

It is these insights that could help the U.S. regulate broadband service providers in a way that would bring down the prices that Americans pay for Internet, which are among the highest in the developed world, while still creating enough competition that companies would still have the incentive to innovate. The problem, according to Joshua Gans, a professor of strategic management at the University of Toronto, is that the federal government has not been regulating broadband Internet like a utility for many years. So, while Tirole’s theories have had a huge impact on the rest of the developed world, where broadband access is regulated as a utility, the effects of his ideas are less felt in the U.S. Says Gans:

The issue in telecoms arises with what is termed the last-mile problem. You only have one set of cables or copper coming into your house. The solution adopted around the world has been to say, okay, one firm owns this cable, but what they have to do is provide access to these cables. So If I want another firm to provide me with TV or Internet, they have to allow that firm to effectively rent the cable from the other firm.

Obviously you can’t just let a firm that’s a competitor rent a key input at any old price, so what Tirole did in a number of papers is say that this is quite a difficult problem, he worked out how regulators should balance the incentives, trying to create the competition, while a firm that creates a cable still has the incentives to connect up new homes and things like that.

This sort of competition has driven down the price of broadband around the world, while American customers tend to pay relatively high rates. In the meantime, Tirole’s ideas have been adopted by regulators in other industries. According to economist and Brookings Institute fellow Robert Litan, Tirole helped regulators force companies to be more efficient through what’s known as “incentive regulation.” Prior to the work of Tirole and others, regulators would simply allow utility companies to charge whatever price was warranted by calculating a rate of return on investment the regulator deemed fair. But this caused utilities to overinvest so that that they could charge more.

Tirole suggested that regulators offer a profit-sharing scheme in which any cost-saving cut or investment would be shared equally by the company and its customers. These techniques have been adopted by electric and water companies across the U.S.