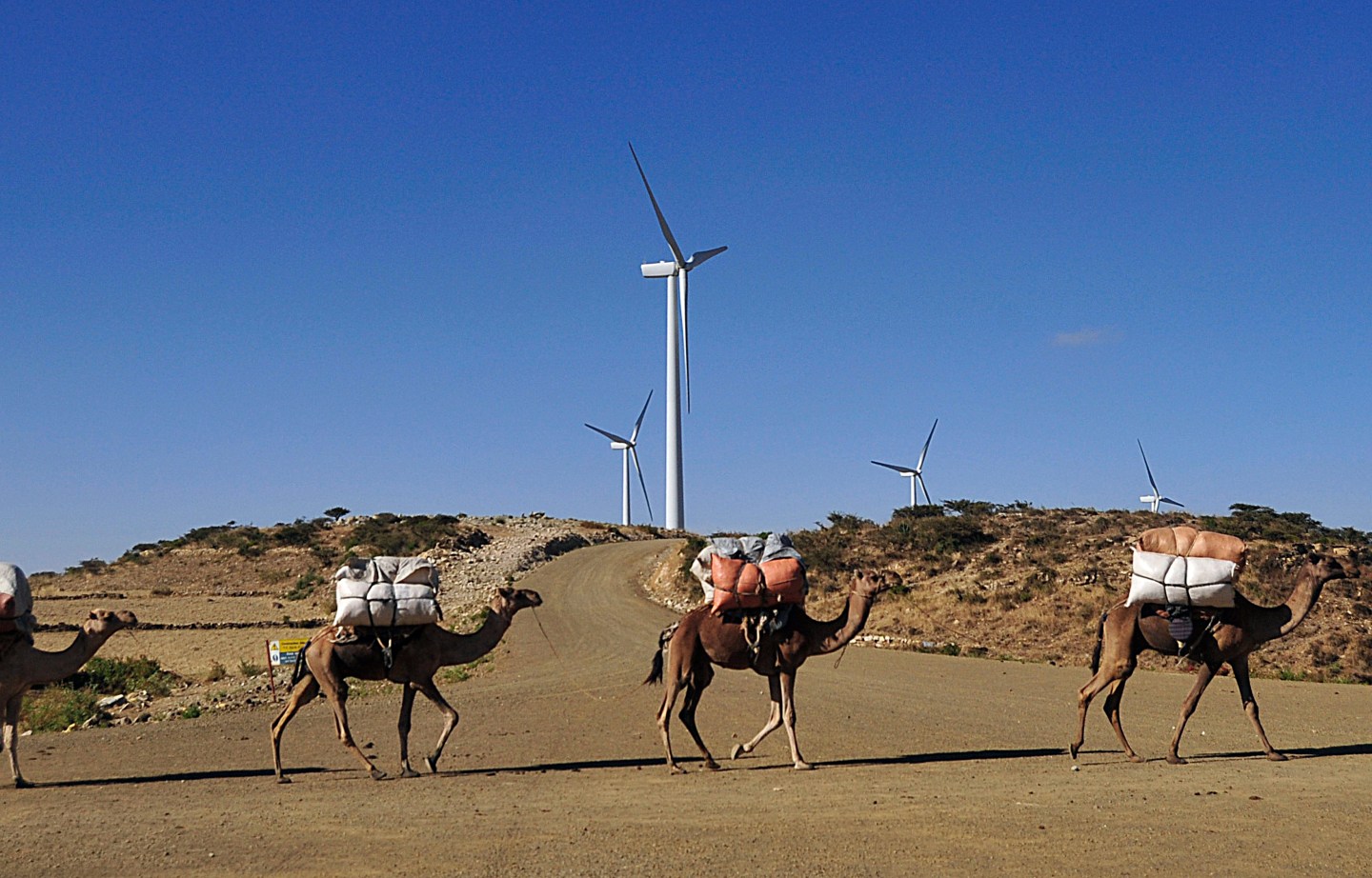 TO GO WITH AFP STORY BY JENNY VAUGHAN Camels walks along the road near turbines at Ashegoda wind farm in Ethiopia's northern Tigray region, on November 28, 2013. The farm, built by France's Vergent Group for 230 million euro ($313 million), is the largest in Sub-Saharan Africa with a capacity of 120 megawatts. With its multi-billion dollar projects in wind, hydropower, solar and geothermal, Ethiopia is pioneering green energy projects on the continent. The Horn of Africa nation aims to supply power to its 91 million people nearly half currently have no access -- boost its economy by exporting power and become carbon-neutral by 2025. AFP PHOTO/JENNY VAUGHAN (Photo credit should read JENNY VAUGHAN/AFP/Getty Images)
Photograph by Jenny Vaughan — AFP/Getty Images

Sub-Saharan Africa’s vast energy resources could be a catalyst for strong growth in the coming decades, but only if countries push through reforms and upgrade their infrastructures.

According to a report released Monday by the International Energy Agency, countries in the region must enact reforms that will attract investors and spend the hundred of billions needed to upgrade aging and poorly functioning infrastructures.

The African Energy Outlook found that 30% of global oil and gas discoveries made over the past five years were from sub-Saharan Africa, which includes countries south of the Sahara desert. But at the same time only 290 million out of 915 million people have access to electricity. That figure is only rising.

Worse, four out of five people in the region depend on firewood and charcoal mainly for cooking due to the lack of electricity. The projection is that figure will rise 40 percent by 2040, putting tropical forests at risk and further contributing to indoor pollution that is already the second biggest cause of premature death behind AIDS in the region.

“When I look at the continent, sub-Saharan Africa is very rich in energy resources and very poor in energy supply and production,” IEA Chief Economist Fatih Birol told Fortune.

“There is huge potential both for oil and gas and, when it comes to renewables, huge potential for hydropower, wind and solar,” he said. “On the other hand, there is very little energy for the people in Africa.”

Africa has long been plagued by the resource curse, where abundant oil, gas and minerals in places like Equatorial Guinea or the Republic of Congo have made a select few rich, led to widespread corruption and left the majority of citizens poor. The energy resources have also sparked conflict in countries such as Sudan and Nigeria, and have contributed to years of coups and political unrest.

That trend is set to continue, the IEA report said, unless countries tackle the range of problems that hinder the energy sector, from widespread oil theft (worth $5 billion a year in Nigeria) to electricity tariffs across the region, which are among the highest in the world. Corruption, too, remains a “major barrier” to investment in some countries.

“There are two major issues here — the lack of investment and the second one is the governance issue,” Birol said of the need for about $140 million a year across the region for the energy sector.

“There are investments coming into the region but our study shows that today $2 out of $3 in Africa is for export-related projects not for the Africans,” he said. “We don’t see the investments can come if the governance issue is not fixed.”

Meike van Ginneken, a World Bank expert on energy for west and central Africa, said she saw a lot of potential for hydropower, geothermal and natural gas across the region but agreed “investment needed to be increased tremendously” especially from the private sector and the building of power delivery systems.

“The question is how do you translate these large resources into increased access?” Van Ginneken said. “What you need for that is a lot of infrastructure, functioning utilities and a lot of money. While there is a lot investment in energy in Africa in the past five years, there has a period of two decades where there was very little investment. So, Africa is catching up.”

To ensure that the energy resources improve living standards and contribute to stronger economic growth by 2040, the report calls for investment of an additional $450 billion in the power sector. It also calls for regional cooperation that could lead to large-scale generation and transmission projects as well as the adoption of “robust and transparent” processes that would result in “more effective use” of oil and gas revenues.

As part of its $11 billion in energy investments in Africa, van Ginneken said the World Bank has supported regional cooperation including the $261 million in guarantees this year for the Banda Gas-to-Power Project which will produce and convert natural gas from offshore gas fields in Mauritania into 300 megawatts of new electricity for the country and for export to Mali and Senegal.

They are also investing in regional transmission grids and setting up rural electrification projects including min-grids and off-grid solar power.

“Regional cooperation and regional power grids will play an important role in bringing down cost which will make it more attractive for the private sector and more affordable for households,” van Ginneken said.

If some of the changes are enacted, renewables could also take off with the IEA projecting they could represent almost half the growth in electricity generation by 2040. Hydro, for example, represents 20% of the region’s power supply currently but only 10% of its technical potential has been realized.

Alex Rugamba, director of the Energy, Environment and Climate Change Department at the African Development Bank, agreed that renewables offer a chance for the continent to pursue a greener path than the one chose by its more developed neighbors.

“Certainly, the potential is high and we are seeing very good take up of all sorts of geothermal, wind, solar and, of course, hydro. We are definitely committed,” Rugamba said, adding that the bank has doubled its financing to the clean energy sector to $4.3 billion from 2007 to 2012.

Both van Ginneken and Birol said they were confident Africa will make the changes necessary in the energy sector, which the IEA projected could boost the economy 30% by 2040.

Birol said he is already seeing several countries take the lead in reforming their energy sectors, including Nigeria, South Africa, Ghana and Rwanda. Angola, meanwhile, is poised to overtake Nigeria as the continents biggest energy producer while Tanzania and Mozambique are set to take advantage of significant natural gas discoveries.

“I see a momentum being built in many African countries that are understanding the critical importance of energy and making some energy sector reforms,” he said. “I see hope there with good governance especially with better management. We could see the energy sector provide a strong trigger for economic growth on the continent.”

Van Ginneken agreed, saying she has seen significant changes since she has been covering the sector the past seven years.

“I certainly see Africa turning a corner,” she said. “The investment in the energy sector in the past few years has been much higher than the two decades before. This is translating into more access to resources, transparency is being improved and the potential of Africa with finds of gas and geothermal in the Rift Valley (in East Africa) is tremendous.”