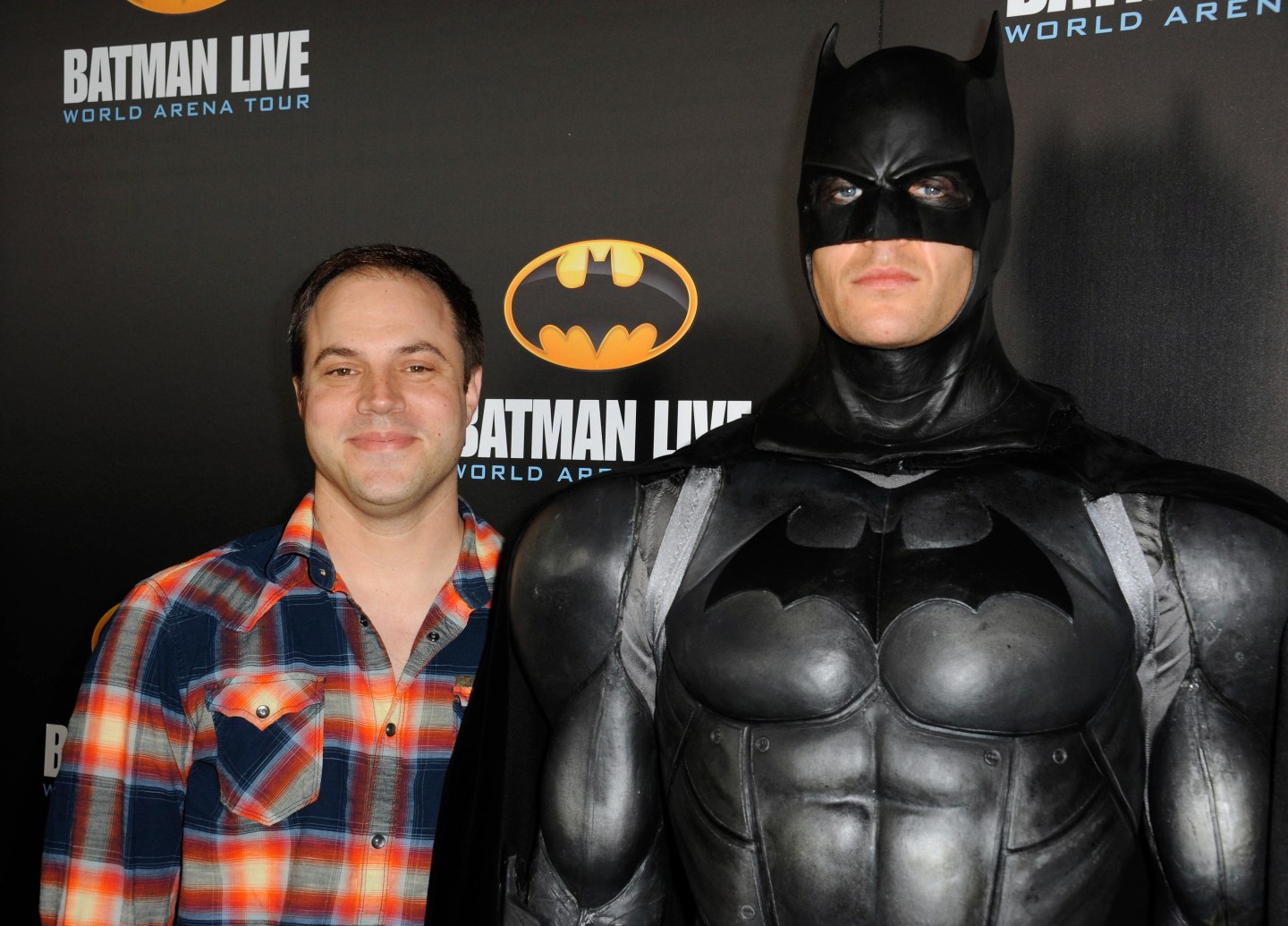 While Marvel Studios (DIS) has released many more big-budget comic book movies over the past decade, the anticipation is building for Batman vs Superman: Dawn of Justice starring Henry Cavill and Ben Affleck and the long-awaited Justice League movie. DC characters are also all over television this fall with The Flash, Gotham, Constantine and iZombie joining Arrow. And gamers are looking forward to the 2015 release of Batman: Arkham Knight, which marks the next gen debut of Batman. The man at the center of this multimedia DC Universe is Geoff Johns, Chief Creative Officer at DC Entertainment (TWX).

The writer of Superman, Green Lantern, The Flash, Teen Titans and Justice Society of America has been busy working with other creatives across every medium to connect DC superheroes with a mainstream audience, which is one seemingly more receptive to them than ever before. Before New York Comic Con, Johns recently talked to Fortune about how video games, mobile and digital distribution are introducing new fans to superheroes that have withstood the test of time in this exclusive interview.

What has WB Games and DC Comics learned about creating comic book video games from the success of the Batman Arkham franchise?

Batman is an awesome character—and the universe is great—but you have to give credit to Rocksteady Studios and Warner Bros. Games. Rocksteady is an amazing studio that put everything they had into that game. The quality of Batman Arkham City is pretty undeniable, so you have to credit execution. Typically games feel like they’re licensed games when they’re based on an IP, and Rocksteady certainly didn’t make that game feel like that. That game felt real, and it was the best Batman game you could possibly make.

What opportunities do you see with other DC comic book superheroes following that model that you employed with Batman—not basing it off of a movie or a television series as was done in the past?

There are quite a few opportunities, and I wouldn’t want to get into them. There’s two in particular, which I don’t want to name just simply because we’re seeing development on them so I wouldn’t want to get too into it. But obviously there are a lot of great characters, whether they’re grounded like Batman and vigilantes or whether they’re a higher concept with sci-fi play. There’s a lot of stuff we talk about all the time, and there’s a couple in particular that we’re working on right now.

Do you feel there’s room for the older traditional licensing model that was done in the past with games based on Superman Returns or Catwoman?

It’s all about the execution at the end of the day. It takes a great idea, but it’s execution that makes it come together. NetherRealm Studios, the Mortal Kombat studio that Ed Boon runs, really kicked ass on Injustice. That’s one of the best fighting games ever, and the best superhero fighting game that’s ever been made. Everyone here at DC is just very careful about how much we license out stuff. A lot of it is publishing with game studios that Warner Bros. owns. It’s all production in-house, and that’s really important to us and to the quality level. If the right partner makes sense then we’ll do it like Telltale Games, who did The Wolf Among Us based on the Fables comic. But for us, the content is all about the studio. We just want to be careful on only working with the best people you can.

What has the rise of powerful mobile devices opened up for the ability to create games in a shorter period of time and deliver games to a huge audience around films, television and comics?

It’s a huge opportunity, and one of the things that Warner Bros. Games has done having Injustice mobile or the Arkham stuff that’s gone mobile. Not only can it be kind of built off these great console games, but there are also massive opportunities for mobile stand-alone games. I love Clash of Clans. My brother and I play it and there are all these wonderful games out there that Warner Bros. has mobile studios that they’ve built. There are a lot of discussions going on right now and games that are in production with DC stuff in the mobile space. The opportunity is huge, and the reach that these games can get instantly is something short of a miracle. It’s a huge growth area for DC and for Warner Bros.

Another game that you have had success with over the last few years on both PC and now PlayStation 4 is DC Universe Online. What opportunities does that free-to-play game platform open up for connecting with new movies and TV shows?

We’re seeing games evolve and the teams have been working on seasonal content. Sometimes it’s tied into something that we’ve got going on in a comic or movie or TV show, and sometimes it’s just an event around a certain holiday or time of the year. But that evolution of being able to enter live content is a huge part of the future for just about every game.

What role have digital comics opened up for attracting a new audience to comics?

It’s an availability issue. I have so many more international readers on my comics alone just because they can download them now and get access to them across the world. It’s just opened up the opportunity for a global audience. When I was a kid getting to a comic shop wasn’t always easy, and sometimes it’s even less so today because they don’t sell them at grocery stores for the most part. So to have the new newsstand in the form of a digital tablet or phone or computer is a great way to buy your comics. It’s a really exciting opportunity because we are hitting new audiences and the number of international readers and fans that it’s brought on has been pretty amazing and very noticeable.

What have you learned from the success of Arrow as a television series that you’re applying to new shows like The Flash, Constantine, Gotham and Supergirl?

You have to embrace the material. One of the great things about working here with Warner Bros. Television and all the producers and writers on the show is that everyone is a fan. They’re embracing this stuff and they’re championing this stuff. Greg Berlanti, between Arrow and The Flash and Supergirl, he knows these characters and has loved these characters for years. It’s about adapting these characters with care and passion and celebration instead of how do we change this and make it more digestible? These characters are already digestible. They’ve lasted for decades and there’s a reason they fit generation after generation and resonate with people. We need to capture that and try and celebrate and embrace it instead of shying away from it or being embarrassed by it. That’s what it’s all about. We’re in an era where people are ready to embrace it, rather than change it for change sake.

What opportunities have new online distribution services like Machinima, Netflix and Amazon opened up for the exploration of live action or animated DC superhero characters beyond television?

We’re doing this limited Justice League: Gods and Monsters Chronicles animated series on Machinima that’s going to explore these different versions of Superman, Batman, Wonder Woman. It’s a great new outlet, and a great doorway. Just like the iPad or the tablet is for digital comics and now we have this great new way to get people these characters and stories. The same thing goes for these digital portals. One of the best things about DC and why these characters will be around forever is that because they’re so mythic that they really are modern day myths. No matter how we access them, whether they’re on paper or beamed into our brain, we’re always going to want stories and characters.

Marvel is bringing out a female Thor. DC has characters like Wonder Woman and Supergirl. How is DC connecting with and trying to attract more female comic book fans?

DC has the best female superheroes in the world between Wonder Woman and Batgirl and Supergirl and Raven and all these other characters. I have two nieces and one’s named actually Kara after Supergirl, which is why I’m super excited about the Supergirl show. It’s the first female lead superhero show that we’ve done, and it’s really important that we get female heroes out there.

What differentiates Supergirl from other comic book shows we’ve seen on television over the years?

I really don’t want to get into the specifics of creative yet. It’s way too early for that.