Boehner to Business: Help Me Stiff-Arm the Nuts 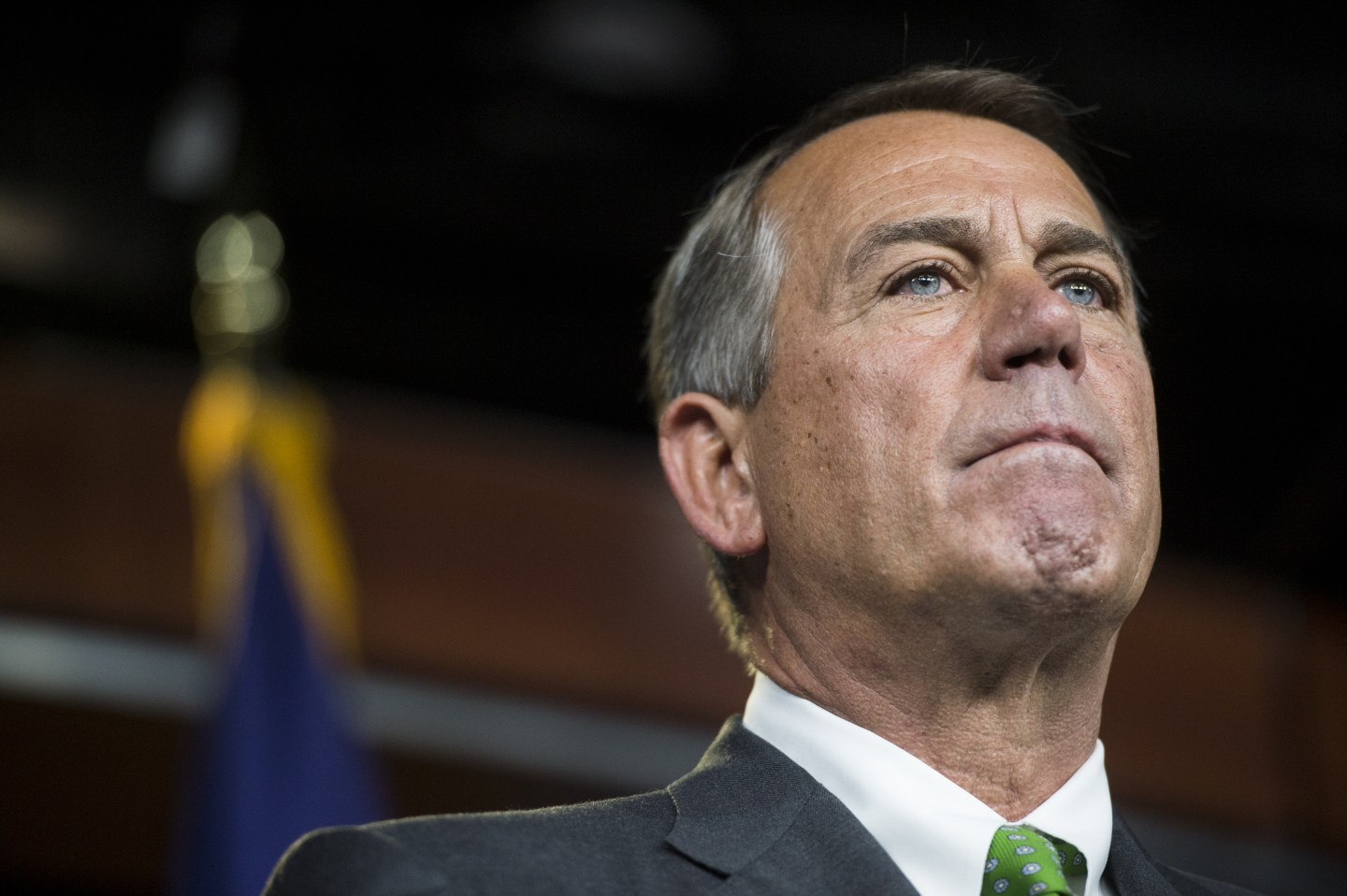 Back on May 20, the National Republican Congressional Committee — the House Republicans’ campaign arm — announced it was launching a “Drive to 245,” a Babe Ruthian exercise in shot calling that implied the party would net an additional 11 seats in the November midterms.

Twenty-five days out from the elections, that remains an uncertain proposition. Republicans are sure to pad their majority, though gains in the single digits look more likely. As Greg Walden, the Oregon Republican who runs the NRCC, tells Fortune, “It is attainable, but it’s a pretty high goal.”

But the Republican boast was never really meant to nail the balloting results. Instead, it was a clever blend of hype and hope served up to major donors about what could follow the election: For GOP benefactors in New York, Washington and beyond who’re past tired of self-destructive antics by Republicans reactionaries, the party tailored the push to conjure the dream of a reinvigorated Speaker John Boehner. Given the room, he could stiff-arm the tiny, troublesome right flank that nearly pitched the country into a debt default three years ago and generally made major headaches out of otherwise simple chores. One Republican operative spells out the subtext of the pitch to the corporate pragmatists the GOP is hitting up for campaign cash: “We want to give Boehner a governable majority so the crazies you hate will be irrelevant.”

Republican leaders can’t call elected representatives on their own team “crazies,” but they can make a broader case. “Growing the majority means we’ve got a bigger pool to draw from to go do the work of the country,” Walden says. The need to build a “governing majority” is his refrain when he makes the sale to rooms full of business leaders he’s asking to contribute. In case that point was lost on any of the Republican rank-and-file, party leadership has helpfully printed it on a palm card for them to refer back to before conversations with major donors, with the phrase spelled out in all caps for emphasis: “We MUST expand our majority to 245 seats — giving us a 55 seat GOVERNING MAJORITY and building a firewall for 2016, regardless of who the presidential nominees are,” the cheat sheet reads.

To the credit of the party — and allies like the U.S. Chamber of Commerce and the Karl Rove-affiliated American Crossroads — Republicans are fielding recruits across the map handpicked to help Boehner do just that. In Michigan, Dave Trott, an entrepreneur and major Republican donor himself, mounted a successful primary challenge to Kerry Bentivolio, a Tea Party-endorsed incumbent who once pledged to hold a hearing on the chemtrails conspiracy theory. In Arkansas, after two failed attempts, Republicans finally lured French Hill — a banker and onetime advisor to George H.W. Bush (beat those Establishment credentials) — into the running for a swing seat north of Little Rock. In Arizona, back in late August, the NRCC and its allies notched another win when Andy Tobin — speaker of the state house, endorsed by Mitt Romney — won a nip-and-tuck primary against a couple of bomb-throwers for the right to challenge a popular Democratic incumbent.

Many of these contenders have been forged by and reflect what appears to be a growing popular disgust with Congressional dysfunction.

The field still has its share of, ahem, colorful characters. For every seat Republicans hope to pick up in a swing district, there’s a reliably red one in which a retiring incumbent is primed to be replaced by a candidate with incendiary views. The hope for leadership is that substituting kooks for other kooks won’t alter the dynamic in the conference — and that whatever rightward nudge those freshmen effect will be more than reversed by the infusion of a new generation of problem-solvers. That is, for every Ryan Zinke, a Montanan who called Hillary Clinton “the Antichrist,” there’s a David Young, an Iowan who’s affect is even flatter than his state. In one of his TV spots, Young explains, “In Van Meter where I’m from, when there’s a problem, we sit at the table, share a pot of coffee, hear each other out and find a solution. That’s what Congress needs.” That, and with Young in the debate, maybe some refills on the coffee.

But as far as its fundraising focus goes, the Drive to 245 so far has left House Republicans majorly outgunned by the Democratic minority. Through August, the House Democratic campaign arm had outraised the NRCC by $33 million, with Democrats more than doubling the Republican haul in that month alone. Walden chalks that up to a pair of advantages Democrats can exploit. While he’s “flying coach on United,” Democrats are deploying “Air Force 1, 2, 3, 4, and 5,” — meaning President Obama, the first lady, Vice President Joe Biden, former President Bill Clinton, and Hillary, the odds-on Democratic presidential frontrunner. “Our biggest fundraiser is John Boehner. After that, it’s me and [House Majority Leader] Kevin McCarthy. We’re not exactly household names.” Plus, he says, Democrats continue to benefit from a mastery of online fundraising that Republicans can’t yet come close to matching.

Republicans are outpacing Democrats when it comes to dollars wrung from corporate political action committees by nearly two-to-one, according to figures from the Center for Responsive Politics. But Senate Republicans are vacuuming up most of those dollars in their bid to retake control of the upper chamber. Compared to the high drama of that contest, it’s tough to get donors excited about whether Republicans pick up six seats or ten in the House. Nicholas Taubman — a former CEO of Advanced Auto Parts and a major Republican donor with ties to Eric Cantor, the ousted House Majority Leader — puts the Senate focus succinctly: “That’s where the money’s going, and that’s where you need to concentrate.”

How Republican gains translate into a governing mandate — and the will to summon it — is a different question. It’s also, of course, the only one that matters. Last month, as Congress raced to finish its work before quitting Washington for the campaign trail, Boehner appeared strengthened in a way that would have been tough to imagine during the government shutdown just a year ago. He quietly gathered majorities for funding the government, extending the charter of the Export-Import Bank — a Tea Party bête noire — and handing President Obama expanded authority to wage war on ISIS.

Business has its list of priorities for Congress to tackle, from revamps of our tax and immigration laws to trade agreements and a long-stalled patent reform bill. Dan Meyer — chief of staff to then-Speaker Newt Gingrich, now a lobbyist with the Duberstein Group — says newer Republican lawmakers he talks to register frustration that they haven’t done much legislating since coming to Washington. “I think there’d be an attitude to try to get some things done,” he says. “I don’t want to oversell it. But giving Boehner another dozen seats to work with would be helpful.”