On Apple, Carl Icahn has a point 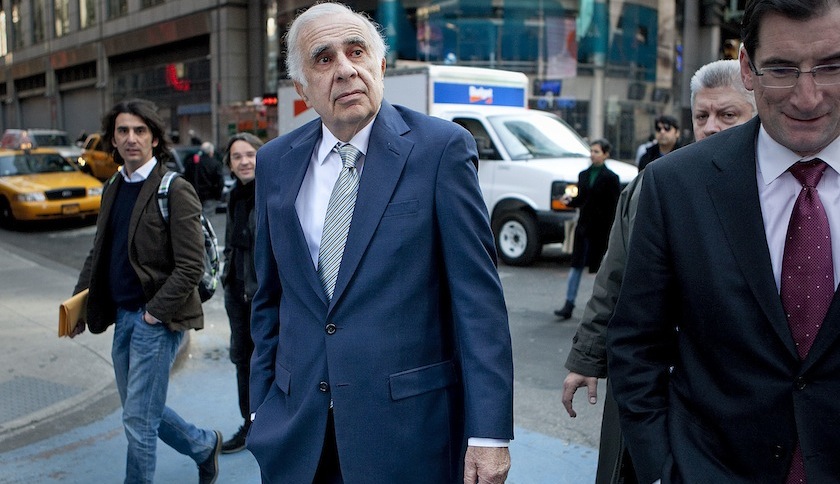 Carl Icahn, billionaire investor and chairman of Icahn Enterprises Holdings LP, center, walks outside of the Nasdaq MarketSite with Robert Greifeld, chief executive officer and president of Nasdaq OMX Group Inc., in New York, U.S., on Tuesday, March 27, 2012. Icahn announced his intention last month to offer $30 a share and give CVR Energy Inc. holders a right to as much as an additional $7 a share, a proposal that values the company at at least $2.6 billion, according to Bloomberg calculations. Photographer: Scott Eells/Bloomberg *** Local Caption *** Carl Icahn; Robert Greifeld
Photograph by Scott Eells — Bloomberg via Getty Images

Carl Icahn is onto something.

No, it’s not the deliriously optimistic forecasts that the legendary investor-provocateur has made for Apple’s product portfolio in his letter to CEO Tim Cook. Who knows if the iPhone 6, the Apple watch, UltraHD TV, and the like will propel the colossus of Cupertino to the world’s first $1 trillion-plus valuation? That would require an unbroken string of successes, unchallenged by competitors, that’s never been equaled. It’s best to take Icahn’s claim that Apple is truly worth $203 a share, twice its current stock price, as the spin of a master promoter rather than a believable estimate of value. Just marvel at Uncle Carl in his “Music Man” mode, and enjoy.

But here’s where Icahn is eminently correct. Apple (AAPL) is piling up gigantic amounts of cash year after year, and it can’t find places to invest it at decent returns. That mountainous cache is driving down the gains it’s getting on each new dollar of profits that mainly add to the mountain—and returns on newly earned, reinvested capital are crucial to enriching shareholders. Icahn wants to channel a big portion of that extra cash to investors in the form of share buybacks.

In his letter to Apple, sent on October 9, Icahn doesn’t even mention the declining return-on-invested-capital issue. But you can bet that he is keenly aware of the problem, and it’s probably the main, albeit unspoken, reason for his campaign. His solution is a good one: Deploy Apple’s essentially idle cash in a way that really works for shareholders.

Unfortunately for Apple and its loyal investors, Icahn’s program probably isn’t enough. It’s likely to slow the decline in returns, but it won’t transform Apple’s fate as a victim of its own success—spinning far more cash than it can profitably put to use.

Apple holds two kinds of assets. The first is the operating assets that design, produce, and distribute its products. The second is cash and bonds. Apple earns fantastic returns on each new dollar it plows into those productive assets. But that money is then mainly parked in cash and securities. In effect, it has nowhere to go. Apple generates miniscule profits on these cash-like holdings. As cash dominates more and more, Apple’s overall returns keep falling.

Results for the fiscal last year, ended September 28, 2013, illustrate the dead weight of this excess cash. Over the 12 months, Apple raised its asset base from $176 billion to $207 billion. Of that $31 billion increase, the growth in holdings of cash and securities accounted for $26 billion. The number would have been far higher if the tech giant hadn’t paid $10.6 billion in dividends and repurchased $22.9 billion in stock. Previously, Apple paid minimal dividends, and it hadn’t repurchased shares in 2011 or 2012.

Those $26 billion newly invested in cash and bonds account for 84% of assets that Apple added in 2013. Yet on all that capital, Apple earned only around $250 million, or 1%. At the end of fiscal 2013, Apple held an incredible $147 billion in cash and securities on its balance sheet, or seven out of every 10 dollars in assets—again, making 1% returns. An analyst from Mars looking only at the balance sheet might take Apple for an ultra-conservative investment fund rather than a seller of products.

As for the assets that actually supply its products—the fabs, and labs and plants—the difference couldn’t be starker. For fiscal 2013, Apple added a mere $5 billion in operating assets to its balance sheet. Its capital expenditures didn’t increase at all. To be fair, let’s increase that number by $1.1 billion to reflect new expenditures on R&D. Even though R&D is technically an expense, it operates more like an investment. So by our definition, operating assets rose by just $6.1 billion.

Measured by its return on those newly-added operating assets, Apple performed brilliantly. It generated $68 billion in operating cash flow, an increase of $4.3 billion from the previous year (that’s after adding back cash taxes). So while Apple made just 1% on its additional holdings that went into cash, it earned 70% on the newly acquired assets that supplied the iPhones and iPads. That’s $4.3 billion in additional earnings on a fresh investment of $6.1 billion.

The crucial number, however, is the return on the total of assets Apple added for fiscal 2013. That’s the new capital it invested to grow the business. The puny gains on the cash horde swamp the princely profits on the operating assets. We’ll use a metric called Cash Operating Return on Assets or COROA, which measures all the cash companies collect during the year, divided by all the money spent on the plants, warehouses, and everything else that produced those earnings, including accumulated depreciation. According to COROA, Apple earned just 8.5% on the additional assets that it deployed in 2013.

Icahn’s proposal squarely addresses that decline, though he’s not saying so specifically. How much will it help? In an appearance on CNBC, Icahn declared that his preference is for a gigantic tender offer targeted at repurchasing $100 billion in Apple shares. Even Icahn acknowledged that’s highly unlikely to happen. In his letter, he supplies his own set of financial projections, incorporating share buybacks. In those forecasts, Icahn proposes $25 billion in annual share repurchases over the next three fiscal years.

It’s a good plan. Apple stock hardly appears expensive at a PE of 16. Repurchasing $25 billion in shares would increase each investor’s earnings per share by 4% and, if the multiple holds, raise the price by the same amount. That’s a far better deal for shareholders than investing that $25 billion in bonds and cash at 1% or so.

A series of yearly, predictable buybacks is also a better concept than the giant, all-at-once tender topping Icahn’s wish list. “Carl is living in the present, and Apple is living in the future,” says Jack Ciesielski, asset manager, author of The Analyst’s Accounting Observer, and the creator of the COROA measure. “It makes more sense to do it gradually.” That solution leaves Apple with the option to do other, potentially profitable things with their cash. Say the valuations in the tech sector crater. Apple could use its cash to acquire companies with promising products on the cheap.

Even under Icahn’s $25 billion-a-year plan, Apple will keep piling up cash. Maybe it will make fabulous acquisitions. Maybe Icahn’s forecasts of world-beating products, wowing customers again and again, for many years to come, will play out. Even with Icahn’s plan in place, though, the cash problem is predictable. The future of its products, and its wisdom as a potential acquirer, is not.