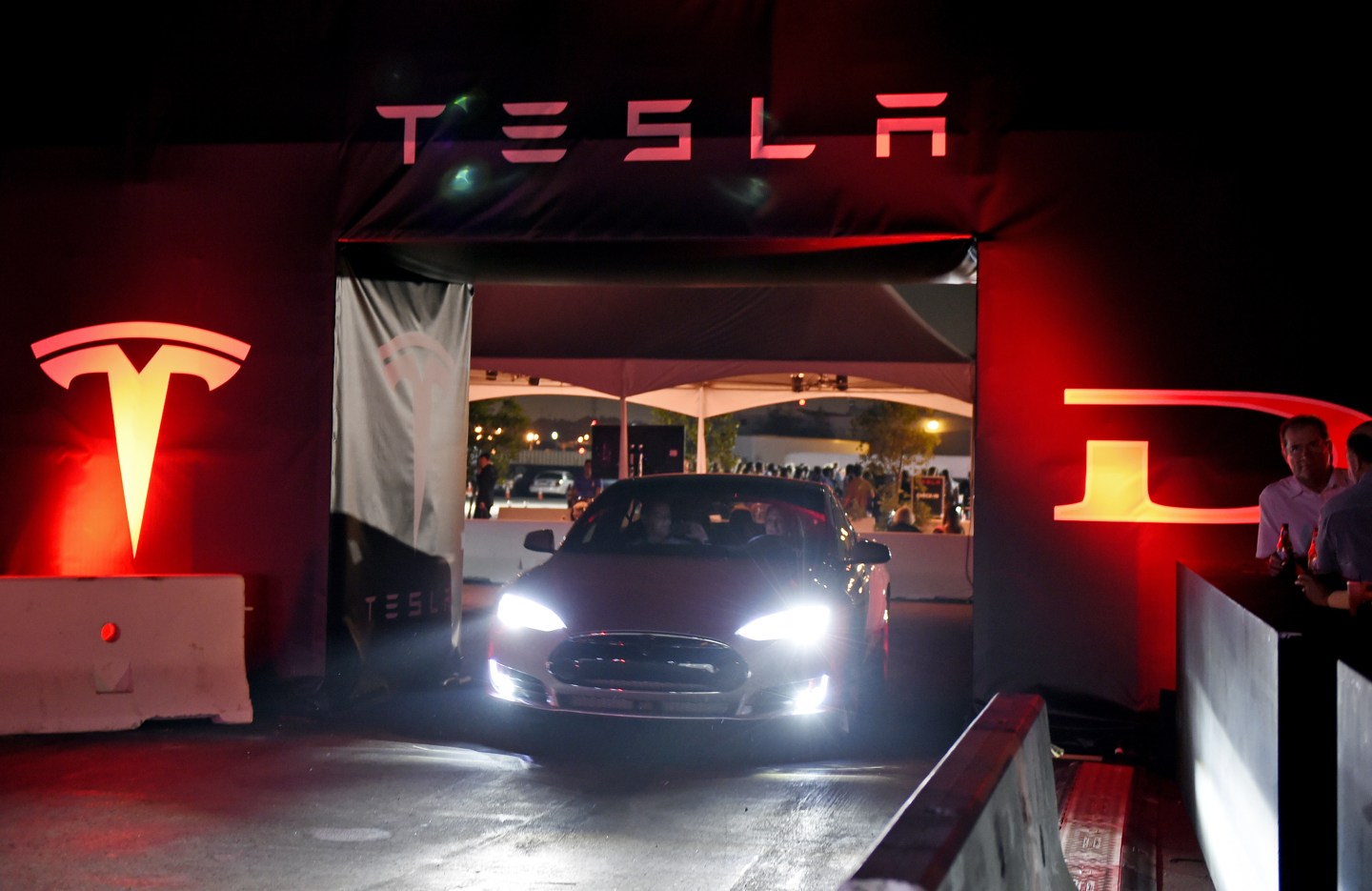 HAWTHORNE CA - OCTOBER 09: Tesla owners take a ride in the new Tesla "D" model electric sedan after Elon Musk, CEO of Tesla, unveiled the dual engine chassis of the new Tesla 'D' model, a faster and all-wheel-drive version of the Model S electric sedan, at the Hawthorne Airport October 09, 2014 in Hawthorne, California. The D will be able to accelerate to 60 miles per hour in just over 3 seconds. (Photo by Kevork Djansezian/Getty Images)
Photo by Kevork Djansezian — Getty Images

Tesla Motors on Thursday took its first step toward automated driving, unveiling features that will allow its electric sedan to park itself and sense dangerous situations.

The company also said it will roll out an all-wheel drive option of the Model S sedan that can go from zero to 60 miles per hour in 3.2 seconds yet doesn’t compromise the vehicle’s efficiency.

The car is like having a “personal roller coaster,” Tesla CEO Elon Musk joked after making the announcement at the packed event in Hawthorne, Calif.

Tesla’s announcement had been eagerly anticipated since Musk last week tweeted that it was “about time to unveil the D and something else.”

Onstage on Thursday, Musk said “D” stands for “dual motor,” meaning Tesla’s all-wheel drive vehicle will have a motor at either end of the chassis to increase control.

In addition, Musk said that the Model S cars that are rolling off the line today already have the hardware for what he called “autopilot.” The features include a long-range radar, image recognition so the vehicle can “see” things like stop signs and pedestrians, and a 360-degree ultrasonic sonar.

The car can park itself in a garage, turn on the air conditioning in advance of a trip and recognize obstacles on the road. He cautioned, however, that “autopilot” was not fully autonomous driving and would not allow a driver to fall asleep at the wheel.

The new features will give Tesla (TSLA) momentum while consumers wait for the launch of its third vehicle, the crossover SUV Model X, next year, said one industry analyst.

“Until the Model X arrives, a vehicle that will substantially amplify Tesla’s appeal and volume potential, these upgrades should keep the Model S at the forefront of advanced personal transportation,” said Karl Brauer, senior analyst at Kelley Blue Book.

Automakers are racing to develop such features as cars that apply brakes automatically when they sense an impending collision or slow down because a vehicle ahead on the highway has warned that traffic has stopped. However, the automakers say the transition will be evolutionary, with such features added slowly over many years as new models are rolled out. Meanwhile, Internet search company Google (GOOG) is developing the technology for a completely driverless car.

General Motors (GM) said last month that its Cadillac brand will introduce a car in 2016 that communicates with other vehicles and will also introduce a vehicle that incorporates semi-automated hands-free driving technology.