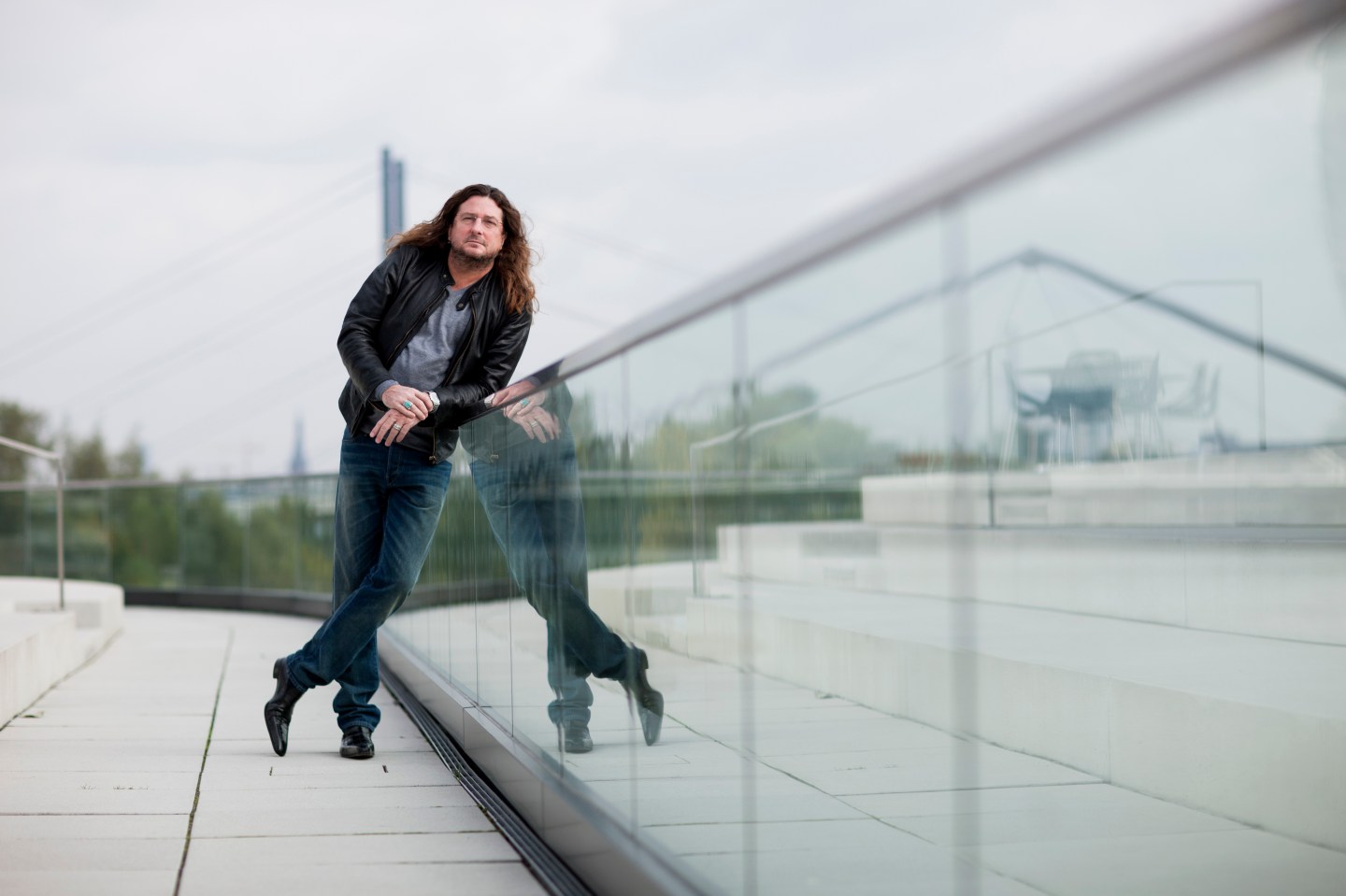 Jacques-Antoine Granjon, the founder of the French e-commerce site Vente-Privee.com, recently swept into New York on a business trip. The 52-year-old Parisian, whose signature style can best be described as biker chic, sports flowing brown locks and favors V-neck shirts that reveal about an acre of chest hair. (Company photos indicate, and a Google image search seems to affirm, that the man has never fully buttoned up a shirt or even owns one with such a capability.) His look includes a skin-tight leather jacket, jeans, and chin scruff. It may come as a surprise, then, that Granjon adores the color hot pink. He uses it everywhere: as a way to brighten his company’s logo, as painted detail throughout Vente-Privee’s corporate headquarters on the northern edge of Paris, even splashed across his Bentley.

Granjon, who goes by his acronym “JAG,” is a man of unexpected moves. He pioneered the online flash sales model in France in 2001, and has since built Vente-Privee into a behemoth. The company currently has 21 million members in nine countries, recorded worldwide sales of $2.3 billion in 2013, and is making a major push into the U.S. market with American Express (AXP) as a partner. Triumphs aside, JAG was in Manhattan to do what all of the U.S. flash sales sites that copied his idea—including Gilt Groupe and Amazon’s (AMZN) MyHabit—are also trying to accomplish: sustain the concept in America beyond a passing fad. In France, where retail price discounts are restricted to twice a year (the famous “soldes”), Vente-Privee moved the bulk of the 85 million items that it resold in 2013 to account for 80% of the company’s annual revenue.

Vente-Privee’s two-years-old, 100-person U.S. office sits on the western edge of New York’s SoHo neighborhood. The Hudson Street loft space occupies half of the sixth floor. Exposed fixtures hang from the high ceiling. Pink, naturellement, frosts the meeting room doors. Unlike the company’s Paris HQ—where sculptor Pucci De Rossi is carving a diamond-shaped table inlaid with black stone from Zimbabwe to liven up the conference room—the long conference room table in New York was distinguished solely by a chilled bottle of still Evian water atop it. JAG poured the three of us—his publicist, this reporter, and himself—a glass when we entered the glass-enclosed space to discuss the state of Vente-Privee’s expansion.

There are five times as many people in the U.S. as in France, JAG says. He sees a vast market opportunity hindered by American retailers’ love of wildly marking up, then deeply discounting, merchandise. “In the U.S., apparel is on sale everywhere. So what is the real price?” he asks. “I won’t tell you which brands, because they would kill me, but they have told me they open their [flagship] shops for image and to feature their collections, but do their turnover at the outlets. That damages brands.”

Vente-Privee’s U.S. business has been strong so far, but relatively small in the two years since it entered the market. It counted $25 million in sales in 2012, its debut. Last year, it generated $50 million. Vente-Privee takes between 30% and 36% of an item’s sale price. Its internal research shows that its 1.05 million U.S. members spend, on average, more than double per purchase than the French, $205 to $81. The company projects U.S. sales will climb to $100 million 2015.

JAG believes the growth will come from using the same business-to-business sales model that has served him well throughout his career in liquidation. With a $3,000 investment from his father, a successful French real restate developer, JAG began selling excess stock at age 23. He rented a shoebox-sized shop in Paris’s Le Sentier garment district and feverishly worked his two phones to learn who was selling and who might be buying each day. “We think you have unsold products. That’s not my fault. That’s your fault,” he would say in his delightfully-direct manner. “How can I help you sell these products?” His first sale was boxer shorts; his first memorable flub was buying 2,000 dresses for dirt cheap that he thought he could easily turn over but ended up being stuck with for weeks. “When we bought inventories, sometimes we didn’t have anywhere to put the merchandise in the shop,” he says, “so we kept them out on the street and tried to sell them very quickly before any rain came.”

It’s the same job as today, except that his shop has moved from Paris’s garment district to the Internet and his clients are some of the world’s top designers. “When I look at a sale, I ask how many pieces did we sell for the brands?” he says. “If the brand needs to sell 20,000 pieces, and we only sell 2,000 but make a lot of money, that is not good because the brand still has 18,000 more.”

“Most of the copycats act like a business-to-consumer company,” JAG says of his U.S. competitors. “They think it’s important to sell products. We think it’s important to have the best brands.” I ask him about Amazon’s MyHabit. “Do you know why Jeff Bezos created MyHabit?” he replies. “Because he met me in New York, and we spent three hours together because he wanted to understand my model. When I met Jeff, he was not in the apparel business. Apparel is a huge market. After our appointment, instead of saying what we could do [together in business], he decided to create MyHabit. MyHabit is exactly like Vente-Privee. What I don’t understand is that Amazon is a model that sells all of the products of the world, to all the people of the world, at all times. It doesn’t sell the products at normal price, and it doesn’t sell the products at inventory [sale] price. I don’t know if it’s working.”

A recent search on MyHabit revealed more than 10,000 different pieces of men’s and women’s apparel simultaneously on sale. One of those was a men’s Salvatore Ferragamo logo scarf. On Amazon.com, the product had been marked down from $350 “retail” to $240. Through MyHabit’s flash deal the price was further reduced to $145. The cost waterfall made the actual number feel plucked out of thin air, especially since Salvatore Ferragamo advertised the scarf for $240 on its own website.

The Vente-Privee model emphasizes scarcity, and sales last three to four days. (“The plane is leaving now, either get on or stay behind,” JAG says.) MyHabit seems to have more of a “the plane is leaving now, but there will be another one next week” attitude. The Salvatore Ferragamo scarf in question has lingered on MyHabit for a month, last seen marked down from a retail price of $275 to $99. The dynamic conditions the customer to wait and wait and wait because they feel the deal will likely still be around whenever they’re ready to buy. It also cheapens the aspirational Italian brand. Who would ever be foolish enough to pay full price?

As for Gilt Groupe, there are questions as to whether the seven-year-old company, injected with at least $240 million in funding according to Bloomberg, is actually profitable. More importantly: How are the deals? In June, the site held flash sales for Tommy Hilfiger suits for $250 and Brooks Brothers neckties for $50, about the same price that a shopper could buy the suits at any one of Macy’s frequent sales or buy the ties on BrooksBrothers.com. “Is it interesting?” JAG asks. “I’m not sure. Is there a great future for Gilt? I’m not sure. So who will take care of Gilt? Maybe they will sell it to the market? I won’t buy shares.”

Forbes pegs JAG’s net worth at $600 million. He says Vente-Privee has been profitable from the beginning, and, looking ahead, he forecasts worldwide sales surging to $11 billion by 2024. The strategy is to stretch the model to other sectors, like travel, wine, and entertainment, and increase the gross revenue in each member country. “We did 100 million Euros in Germany last year and 1.4 billion Euros in France,” he says. “There are more Germans than French and they are richer. So why shouldn’t I do 1 billion Euros in Germany?”

Vente-Privee has never advertised, and it won’t start doing so now, either. “I could spend millions on shows on TV, but I don’t think it will really increase the traffic of Vente-Privee,” he says. JAG sees his newsworthy offers as the ads. It’s Field of Dreams marketing: If Vente-Privee is selling Christian Louboutin shoes or Kiton apparel at 40% off, then customers will flock to it.

JAG acknowledges that his word-of-mouth, business-to-business approach moves too slowly compared to the warp-speed digital world. It’s why he’s playing catch-up in the U.S. market, where his competition is more familiar to consumers. Still, he has his pitch ready for U.S. partners. “Of the consumers who use the site, 40% of them go and shop in the real stores of the brands,” he says. “We don’t believe that digital is the only solution for the future. The future is click and mortar, and we are a click-and-mortar company.”