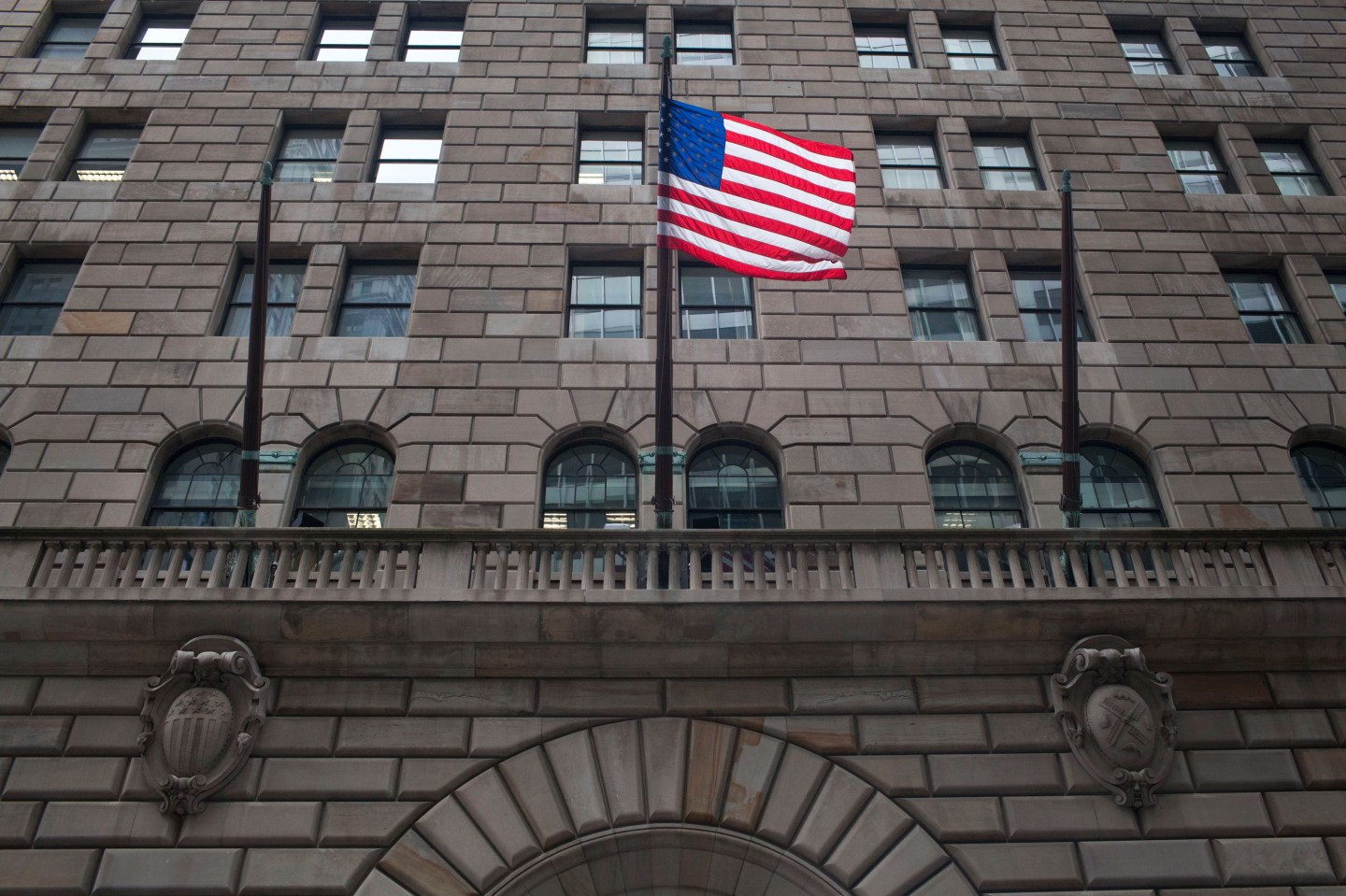 NEW YORK, NY - JULY 29: An United States flag flies over the entrance to the Federal Reserve Bank of New York, located at 33 Liberty Street, on July 29, 2011 in New York City. Bankers and economists were invited to meet with Treasury Department officials at the bank today to discuss the on-going debt-limit crisis and how it could effect markets. (Photo by Andrew Burton/Getty Images)
Photo by Andrew Burton—Getty Images

A new story by Jake Bernstein of ProPublica, the public-interest journalism site, chronicles how a courageous bank examiner strove to really do her job, imposing regulations — as written, no compromise, no backing down — on an institution allegedly expert at skirting them: Goldman Sachs.

The whistleblower says the timidity of her bosses at the New York Federal Reserve stymied her efforts to reform what she regarded as the storied institution’s rampant conflicts of interest. Her reward for confronting her supposedly-spineless bosses and the intimidating Goldman brass? Getting fired after a mere seven crusading months on the job.

Much of the information in “Inside the New York Fed: Secret Recordings and a Culture Clash” first appeared a year ago in another ProPublica story. That piece was based on allegations contained in a lawsuit that the ex-examiner, Carmen Segarra, filed against the Fed for wrongful dismissal. In the new story, the big revelation is that Segarra secretly taped 46 hours of meetings and conversations with her co-workers at the Fed. In fact, you can listen to the tapes on the website of “This American Life,” the radio show whose producer Brian Reed collaborated on the story. Never before have we gotten such a close look into the inner-workings of the Fed’s banking regulations, and how politics can shape the rules that govern America’s banks.

According to the story, the New York Fed hired Segarra as part of a laudable campaign to overhaul its regulatory practices. Following its failure to curb the reckless risk-taking that caused the financial crisis, the Fed acknowledged that its examiners were excessively deferential to Wall Street. An independent study found that the examiners were vulnerable to “regulatory capture,” meaning they’d rather placate the bankers they were supervising than force them to follow the rules. The Fed also sought examiners with a strong grounding in compliance and risk-management, capable of spotting weaknesses in the banks’ practices and rebutting the highly technical arguments that they summoned to justify those practices.

Segarra appeared the ideal package. She was a lawyer with thirteen years experience in compliance at top banks, and, as quickly became apparent, not in the least cowed by her superiors or investment bankers. Her hiring in late 2011 coincided with an important reform initiative. In the past, examiners called “relationship managers,” located inside the banks, would call in expert risk managers from the Fed’s central offices to look at specific problems. In practice, those specialists reported to the relationship managers, who frequently were cozy with the bankers whom they saw every day. Under the new system, the experts would also work inside the bank along with the relationship managers. And they would have far more authority, reporting not to the relationship manager, but to the top Fed official assigned to regulating the bank.

Segarra’s specialty was ensuring compliance with the Fed’s rules on conflict of interest. According to its critics, a number of “serving both sides” issues have plagued Goldman in recent years. Goldman paid a $550 million fine for organizing the notorious Abacus transaction in which it profited from both touting mortgaged-backed securities for some clients, and helping another client to short the same doomed bonds. Goldman also drew criticism for making money on both sides of the 2011 El Paso-Kinder Morgan merger — it was advising El Paso on whether to sell, at what price, while holding a big equity stake in Kinder.

The story’s most intriguing case study involves a deal Goldman made with Spanish bank Santander. It illustrates the Fed’s vacillating approach to regulation. In January of 2012, Goldman informed Segarra and her superiors that it was about to complete a transaction in which the Spanish lender would transfer shares in its Spanish subsidiary to Goldman, which would receive $40 million in fees, and big commissions from trading those shares. The motive was no secret: Santander was under pressure to raise its capital ratios, and the transfer was, in effect, a strategy designed to make its liquidity look better to regulators.

The Fed’s regulators at Goldman thought the deal was a gimmick to make Santander appear healthier than it really was. The team’s chief actually called the arrangement “fraudulent,” but says that the Fed’s general counsel overruled him, insisting it was perfectly legal. The team couldn’t even agree on how to express its displeasure to Goldman. They discussed detailing their objections in an official letter, but it’s unclear if the letter was ever sent. The examiners mainly congratulated themselves on “putting them through their paces” so that Goldman wouldn’t do anything that allegedly dodgy in the future.

Segarra was appalled that all the talk never led to action, a frequent occurrence at the Fed. “It’s like the information is discussed, and then it just ends up in a vacuum, floating on air, not acted upon,” she told ProPublica. Her bosses did take decisive action after waffling on the Santander deal: They fired the outspoken Carmen Segarra, just the kind of outspoken reformer they claimed to prize.

In response to the ProPublica article, Goldman Sachs told the public-interest journalism site that the bank “has long had a comprehensive approach to addressing conflicts.” The bank also said Segarra had “unsuccessfully interviewed for employment at Goldman in 2007, 2008, and 2009.”

The New York Fed told ProPublica it “categorically rejects the allegations being made about the integrity of its supervision of financial institutions.”