An audacious plan to fix the Internet’s original sin 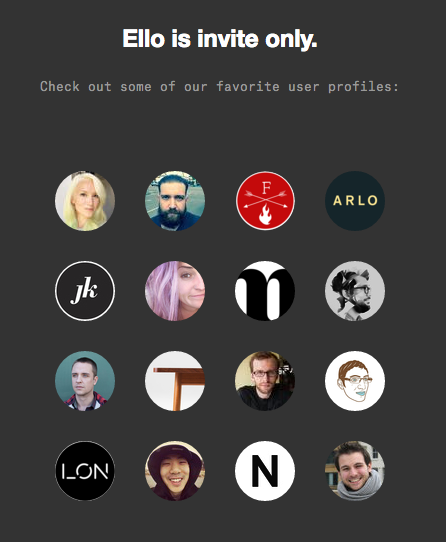 The social networking site Ello is just five weeks old, but damn if it hasn’t made an impression. In the past week, the site has exploded on social media, starting with the LGBTQ community, the music industry, and—somewhat randomly— Germans. It continues to expand to various other corners of the Web. Today, 40,000 new signup requests are pouring in each hour, according to co-founder Paul Budnitz. The site had to temporarily cap new user invitations several times to keep from crashing. More than a million people are waiting to get into Ello, which is more people than are actually on Ello.

It’s the kind of attention any app developer would die for. How did a handful of guys in Vermont, with a bare-bones Tumblr knockoff, create the latest Web craze? Answer: Launch with a manifesto and an enemy. Ello refuses ads and dislikes Facebook for doing the opposite. “Your social network is owned by advertisers,” its manifesto declares. “You are the product that’s bought and sold.”

At the bottom of the screed, users are offered two buttons. Click “I agree” and you end up on a sign-up page. Click “I disagree” and you arrive at facebook.com. A subtle burn.

While discussing the app, it’s difficult to keep Budnitz from wandering into soapbox territory. “I want to change the world,” he says in an interview with Fortune. “I want to prove that advertising isn’t the only way to make money on the Internet. What’s screwing up the Internet and creating all the data collection problems and privacy issues has to do with advertising as a model on the Internet.” Hundreds of thousands of people have clicked Ello’s “I agree” button in solidarity.

There’s a small problem with being too self-righteous on the Internet, though: People are eager to point out your hypocrisy. Not long after Ello went viral, one of the site’s users pointed out that it had raised venture capital. The message was that the company will eventually be pressured to make lots of money or sell to someone who would likely do the same. Ello’s investors own 12% of the company, Budnitz says, and acknowledges that Ello is “obviously a business.” Unsurprisingly, his inbox has been flooded with venture capital interest this week.

There have been issues with Ello’s lack of privacy and blocking features, a basic requirement for any social media site in the era of online bullying and harassment. The company has responded by building features as quickly as possible, moving around its priorities, not unlike a politician might do to keep various constituents happy. For the haters, Budnitz has little sympathy. “If you don’t like what we’re doing, then please delete your account and leave,” he says.

Even if Ello, a company with strongly stated principles, can make its audience of users with strongly held beliefs happy, it faces a much bigger challenge: survival. To be a successful business, Ello faces the not insignificant task of turning Internet’s entire business model on its head.

Content and communications on the Web have monetized with eyeballs and advertisements since the Web’s earliest days. In Michael Wolff’s 1998 book Burn Rate, the teams at Time and Wired magazines in the mid-1990s separately have a lightbulb moment: “Users prefer to accept advertising rather than pay for the cost of content.” He writes: “Wired’s stature in the Internet community, and Time’s stature in the advertising community nearly overnight made advertising part of everyone’s plans for the Web.”

Wired’s first banner ad appeared in 1994. On that foundation, the Web’s economy was built. The ad-supported Web contributes around $530 billion to the U.S. economy, directly employing two million people and indirectly, 3.1 million, according to an IAB study from 2012, the latest available.

It’s not that the world loves digital advertising. It’s that advertising happens to be the thing that works best. The Atlantic recently called digital advertising “the Internet’s original sin.” And so, we have a handful of noble, ambitious, possibly naïve attempts to repent by reeling back Web’s default business model. Before Ello, there were the social networks App.net and Diaspora, both of which came up short in their lofty goals.

Ello’s business plan is different. The site plans to charge for features. If you want to manage two different accounts on Ello, you will have to pay a one-time fee of $2. The site launched with hardly any features in order to be as simple as possible. That gives Ello the option of charging for each new feature it introduces.

The problem with App.net, Budnitz says, is that its $50 per year membership was a high hurdle for people to get over. But it’s not clear how, even at scale, charging users $1 and $2 at a time could turn into a sizable (nevermind profitable) business. The company’s investors might not be okay with that, but Ello’s founders are. Its manifesto states that Ello’s founders are not interested in ruling the world: “We think people that are motivated to do things like that have unresolved psychological problems.”