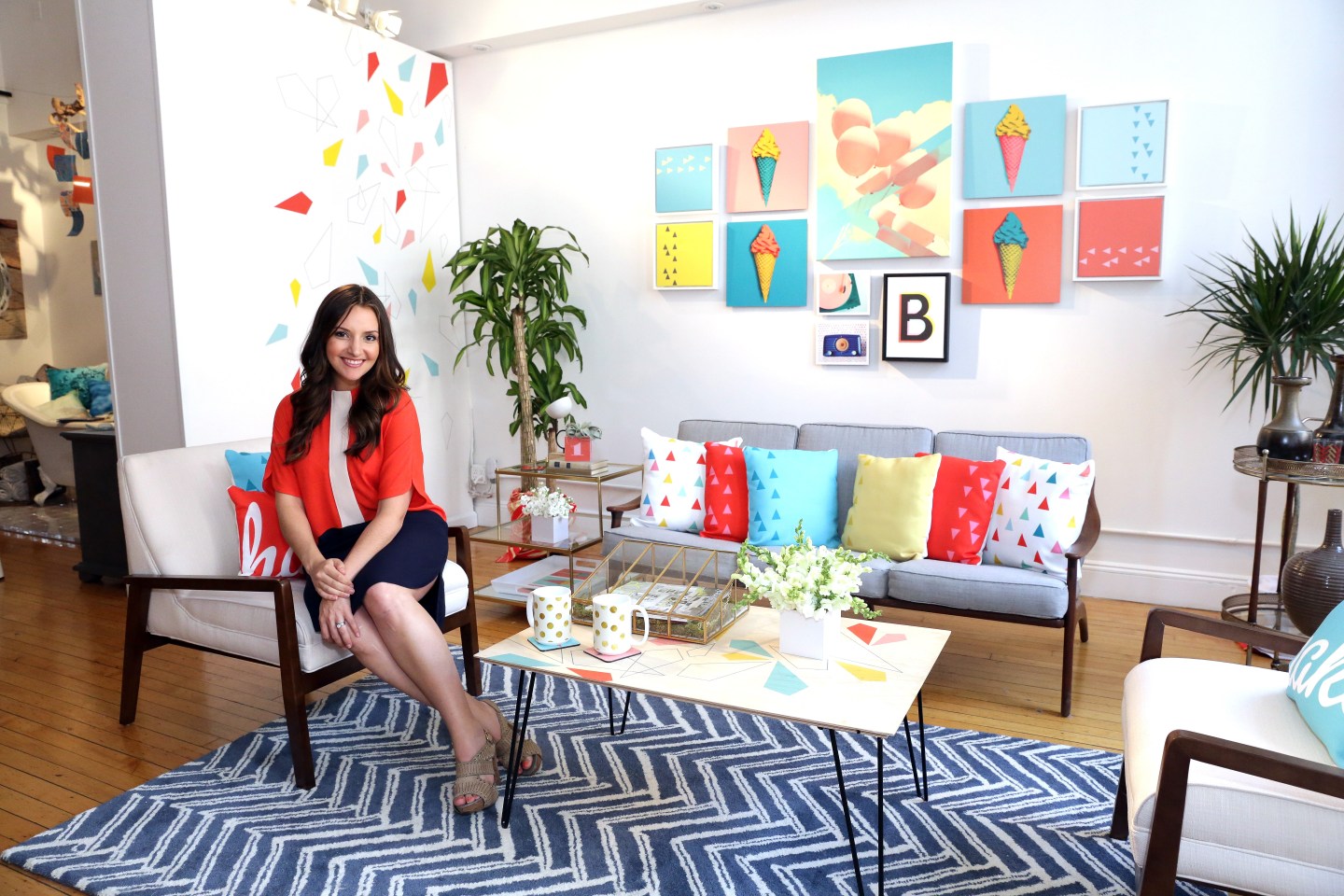 Brit Morin, Silicon’s Valley’s would-be Martha Stewart, is used to criticism. She’s been ridiculed for her arts and crafts web site Brit + Co and its sometimes loopy fashion tips. She’s been accused of ripping off ideas like placing smartphones in bowls to create an improvised stereo. Meanwhile, the tech industry’s gossip blog Valleywag, pokes fun at her nearly every move.

“Brit Morin buys bigger office to continue doing nothing,” the site said in a headline to mark her signing a three-year lease for a new office in San Francisco.

But having critics doesn’t faze Morin, who tries to ignore the negative coverage and doesn’t take it personally.

Her persistence, camera-ready smile and easy Do-It-Yourself projects may help explain the appeal of Brit+ Co to its audience of mostly women in their 20s and 30s. The site has 859,000 visitors every month, according to the measurement service comScore, which makes it still a small player.

Morin is hoping for a bigger audience through her many appearances on the “Today Show,” a book called “Homemakers” due in March, and a growing crafts and fashion conference business.

It’s a far cry from Morin’s early years in San Antonio, Tex., decorating her room, teaching herself how to cook and sew. While attending the University of Austin, she landed an internship with Apple (AAPL), which led to a year of public relations at the tech giant. While there, she met husband Dave, the cofounder and CEO of social network app Path, before leaving to for a job in marketing at Google (GOOG). Eventually, she grew tired of the office routine and realized that she missed making things.

So Morin quit, took six months off, enrolled in some design and web development classes and built Brit + Co with the aim of creating a site centered around accessible Do-It-Yourself projects: Recipes, make-up tips, and home decorations ideas. It’s also an online shop that sells a mix of ready-made wares and $25 “Brit Kits,” boxes filled with the parts to make jewelry or home accessories. The startup holds Do-It-Yourself parties hosted by users who round-up 10 or 20 of their friends. Marketers like Velcro, Home Depot (HD) and Timex sponsor these sort of modern-day Tupperware parties, and, in return, get some of their products included in Brit Kits. Think of it as Morin’s take on product placement.

Susan MacTavish Best, who owns a public relations agency and has built a rival fashion and decor website, Living MacTavish, gave Morin credit for her site’s focus on easy tips, saying, “Brit has done an enviable job of encouraging women to find their inner little girl.” But she also gave a bit of backhanded compliment about the actual substance and style of some of her low-brow ideas.

“As someone who doesn’t have a crafty bone in her, I find what she can do with duct tape inspiring,” MacTavish said.

Although Brit & Co has revenues “in the millions,” according to Morin, it has yet to turn a profit. But she argues the market opportunity for businesses focused on arts and crafts is huge with annual spending of $34 billion for supplies alone. Taking any substantial piece of that market will take a lot of time and effort. Becoming a widely-recognized style-maven will require a lot more converts.

“The thing about Martha Stewart is that she was so ingrained in so many people’s homes, that if she suggested they put the toilet paper front-facing, a lot of them would do it,” says Dean Crutchfield, a branding specialist and founder of marketing firm DCA Growth Advisors.

Based on turnout for her second Re:Make conference in San Francisco earlier this month, she has some potential. Five hundred people paid the $299 price of admission on the first day to catch conference panels, ogle product booths, and assemble Brit Kits; another 5,000 showed up the day after to check out the free festival.

The three-year-old site, which employs 40, is backed with over $7.5 million in funding from investors like Yahoo CEO Marissa Mayer and Index Ventures. Instead of relying on display advertising for revenue as many online sites do, Morin is banking largely on conferences, Do-It-Yourself parties, and Brit Kits, as well as the e-commerce side of Brit + Co.

Morin’s upcoming book, “Homemakers,” is part of the marketing strategy. It is half a how-to guide, half-sociological exploration into the evolving definition of a”homemaker.” How it’s received, even by Morin’s detractors, may build her brand because even so-called “negative publicity” can prove to be just the opposite.

“This generation [of women] is just so different from that of our mothers’ and grandmothers’,” she explains. “Women are really interested in tech. They grew up with it for the most part — many women under 35 had access to the Internet as teenagers. So, I felt like it was time to rewrite the rules.”

First thing’s first. Morin, who is pregnant, has only two weeks or so until her due date. She and her husband are keeping the gender a surprise and have several names picked out. (“We thought about crowdsourcing [baby names] but thought that wasn’t the best idea,” she jokes.) The nursery in their Marin County home is nearly finished. And Morin is obsessed with finding the best in so-called “baby tech” by exploring everything from the practical to the excessive, like ankle bands that track a baby’s movements and diapers that let parents know when it’s time for a change. When Morin gives birth, expect another round of Valley tongue-wagging.

“They can say what they want, but you have to stick to your guns,” Morin says. “I put my name and my face in the business. So, you’ve got to have a thick skin. You kind of have to know that going into it.”