Thanks to Obamacare, virtual-reality doctors are booming 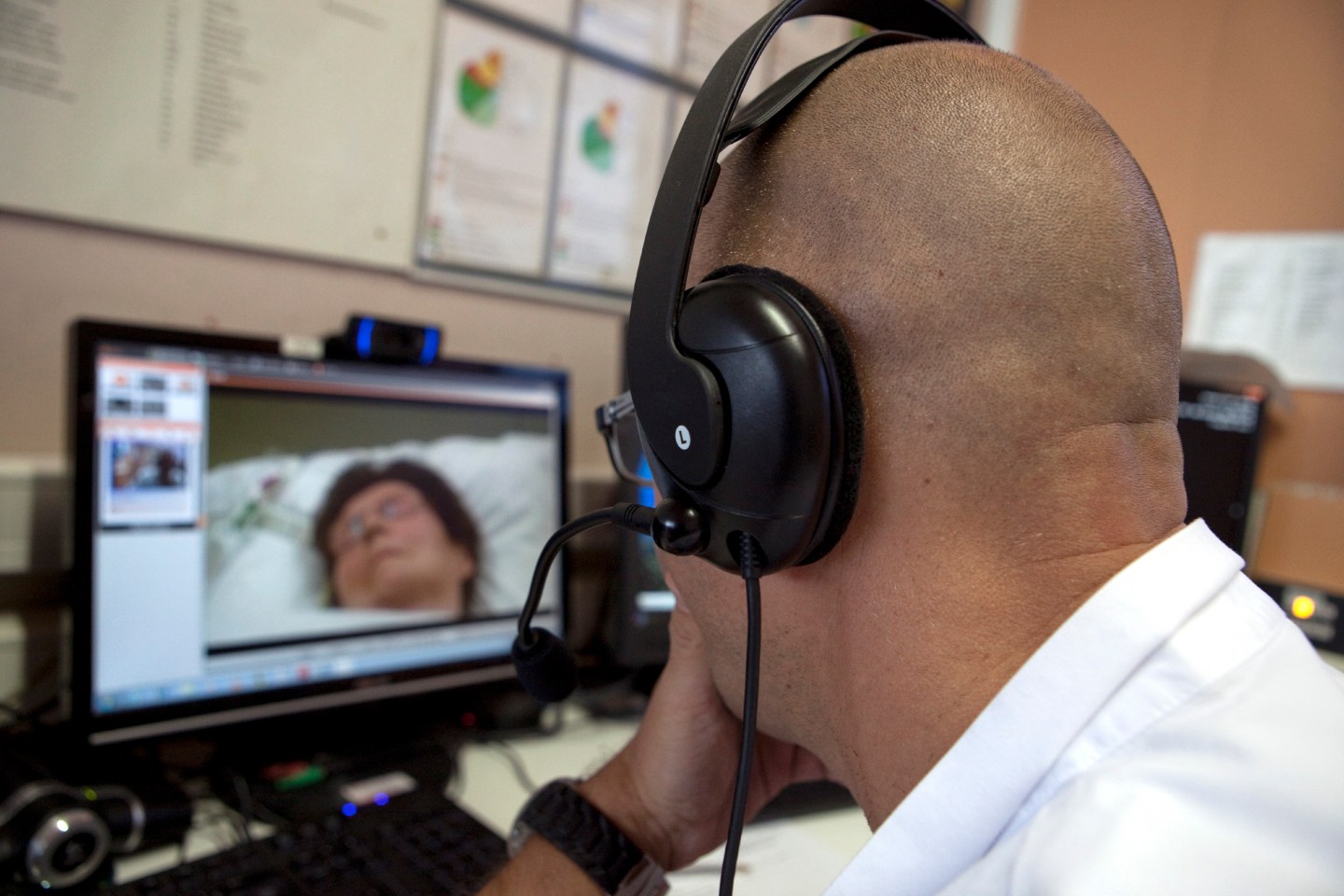 Tele-consultation between the neurology department in Besancon hospital, France and A&E in Dole hospital, France. Dole hospital doesn't have a neurology department which makes detecting a CVA a difficult task. Telemedicine allows A&E doctors at Dole Hospital to obtain an immediate diagnosis by a neurologist in Besancon hospital. This system allows doctors to exchange medical imagery and the patient's file. (Photo by: BSIP/UIG via Getty Images)
BSIP UIG via Getty Images

Obamacare might not let you keep your old doctor, but it may pay for a virtual-reality physician—and you won’t even have to get out of bed to get diagnosed.

For years, it has been possible to “see” your doctor without ever going into the office for an appointment, thanks to online chatting and videoconferencing technology. But few patients and doctors tried it because of one very big obstacle: Insurance companies wouldn’t pay for it.

Now, that’s finally changing. Teladoc, a so-called telemedicine company that facilitates virtual visits with real doctors, has convinced several major health insurers and employers to cover the remote consultations the same as they would an in-office appointment.

Teladoc, founded in 2002, was initially slow to catch on. But after it grew revenues by 100% in 2013 and with sales set to double again this year, investors have come running: The company just closed a $50 million Series F fundraising round, bringing its total funding to roughly $100 million, according to CEO Jason Gorevic, who joined the company in 2009. (Gorevic even had to turn away investors as the recent funding round was oversubscribed, he says.)

Obamacare—or the Affordable Care Act, as it is officially called—has been a catalyst for Teladoc’s recent growth surge. The law puts pressure on doctor’s offices, who are seeing more patients, as well as employers, who are looking to cut healthcare costs. As a result, telemedicine is becoming increasingly popular as a cheaper alternative to going to the emergency room. Insurance companies including Aetna (AET), Blue Shield of California and Oscar—which offers Obamacare plans on New York’s health exchange—have recently signed on with Teladoc, as have Home Depot (HD), T-Mobile (TMUS), pension giant CalPERS, and others.

The Affordable Care Act “is certainly an accelerator for us,” Gorevic says.

More than half (52%) of large employers plan to offer telemedicine in their health coverage in 2015, up from 28% this year, according to a recent survey by Towers Watson and the National Business Group on Health.

After acquiring its two main competitors—AmeriDoc and Consult A Doctor—over the past year, Teladoc is the largest telemedicine provider, with 8 million individual patients from 4,000 clients.

There are about 550 doctors who are on-call with Teladoc in their spare hours (often, when they’re not running their own practice or pulling hospital shifts)—similar to the way on-demand car startup Uber allows taxi drivers to connect to the service whenever they’re on the road and looking to pick up passengers.

“It’s a lot like Uber,” says Gorevic, adding that there are waitlists to become a Teladoc doctor in most states. “We were first, though,” he adds.

The doctors can treat flu symptoms, rashes, allergies, urinary tract infections, and bronchitis—and even prescribe medication—without ever physically seeing the patient. Gorevic says nurses then go back and review the charts to effectively audit the diagnoses and treatment. Teladoc refers about 1% of consultations to the E.R., and 5% to 6% to a primary care physician or urgent care center. (No, you can’t find a new doctor through Teladoc: The company prohibits its doctors from seeing their online patients in real life.) Soon, Teladoc plans to expand its specialty offerings to include dermatology and behavioral health.

Teladoc charges an annual subscription fee for its service plus a $40 co-pay per video or phone appointment with a doctor, though employers sometimes subsidize or cover the co-pay completely for their employees. Health insurance startup Oscar (co-founded by venture capitalist Joshua Kushner), for one, has promoted its ACA-compliant health plans with the perk of getting to talk to doctors 24 hours a day—through Teladoc—for free.

According to an SEC filing relating to its recent fundraising round, Teladoc brings in between $25 million and $100 million in sales. The company is also experimenting with taking a cut of the cost savings it delivers to health plans, which could boost revenue further. Revenue grew 75% in 2012, 100% in 2013 and is expected to grow another 100% this year, Gorevic says.

And as Americans gear up to enroll in health insurance this fall to meet the coverage requirement in Obamacare’s second year, Gorevic expects more employers and insurers to flock to Teladoc.

“Our pipeline of health-plan clients is bigger than it’s ever been,” Gorevic says. “We see our first quarter being our biggest growth quarter yet.”

Thanks to Obamacare, Teladoc has a very healthy outlook—and Gorevic isn’t ruling out an IPO as the next step.