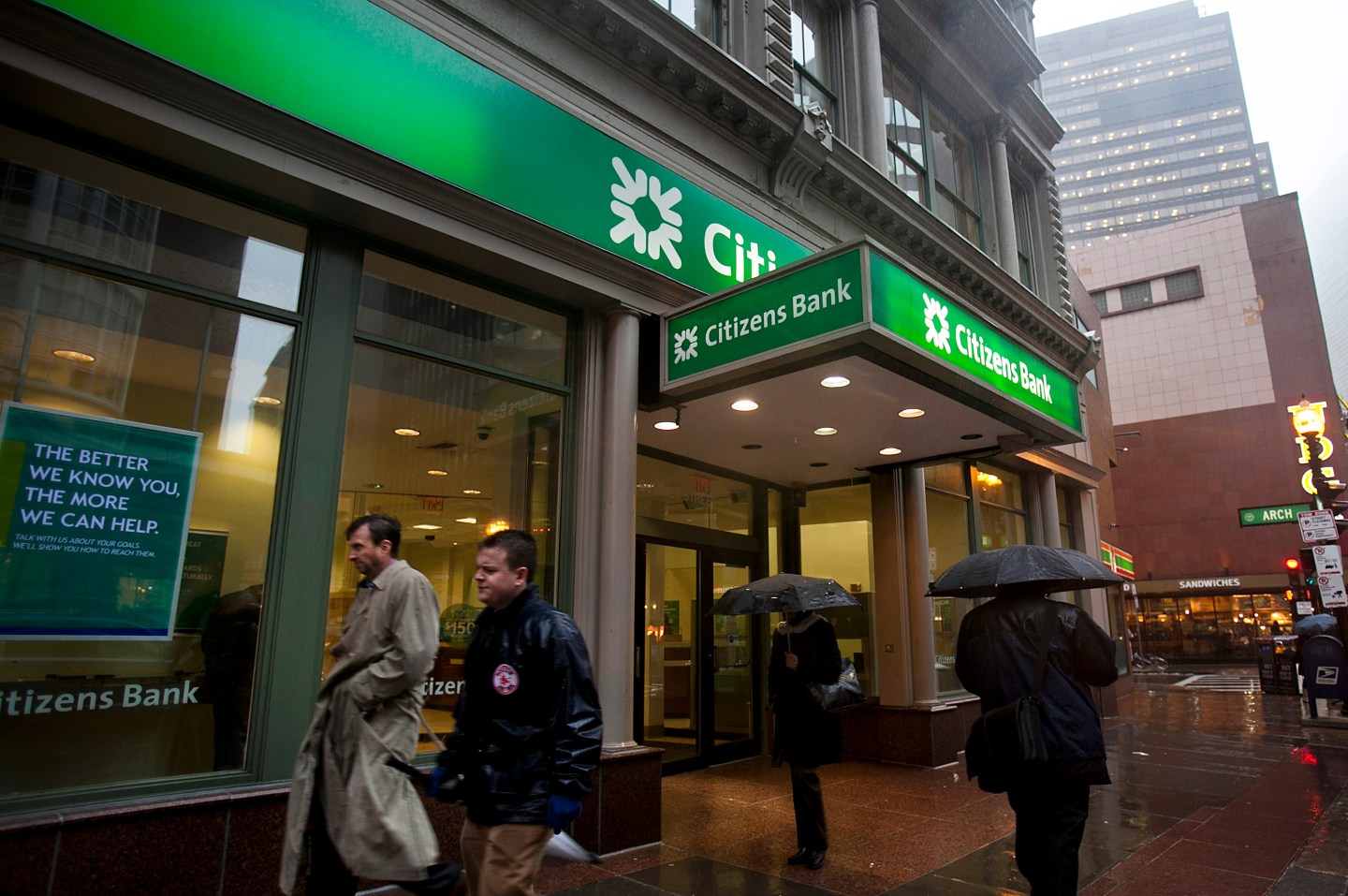 Pedestrians carrying umbrellas pass in front of a Citizens Financial Group Inc. bank branch in Boston, Massachusetts, U.S., on Wednesday, Feb. 27, 2013. Royal Bank of Scotland Group Plc will this week announce plans to sell a stake in Citizens Financial Group Inc. and shrink assets at its investment-bank by as much as 30 billion pounds, said a person with knowledge of the plans, who asked not to be identified because the matter is private. Photographer: Kelvin Ma/Bloomberg via Getty Images
Photograph by Kelvin Ma — Bloomberg via Getty Images

Citizens Financial Group’s (CFG) spin-off from its U.K. parent, Royal Bank of Scotland Plc (RBS), fell flat, as weak demand from investors led the banks arranging the sale to cut its price below the targeted range.

RBS announced late Tuesday that it had sold 140 million shares at $21.50 each, after originally wanting to get between $23 and $25 for them. As such, the issue raised only $3 billion for RBS in the first instance, rather than the hoped-for $3.5 billion, valuing Citizens at $12 billion overall.

The sale is the second-biggest IPO in the U.S. this year after Alibaba and the biggest banking IPO in the U.S. for over a decade, according to the Wall Street Journal. Although it comes at a time when banks’ profits are back at their highest level since the crisis, the sale was complicated, among other things, by criticism from U.S. regulators about Citizens’ capital levels and governance in this year’s stress test. The Financial Times also cited investor concerns that the targets set out by management were too optimistic.

RBS may still issue another 21 million shares at the same price through a greenshoe option, which would raise the sale volume to $3.46 billion and leave Providence, R.I.-based Citizens with a 28.75% free float.

RBS is looking for a gradual exit from Citizens–still one of the largest 20 banks in the U.S. by assets despite its parent’s problems–in order to strengthen its balance sheet and focus on operations closer to home.

RBS was bailed out at a cost of 43 billion pounds ($70 billion) in 2008 by U.K. taxpayers after a reckless expansion.

“This IPO represents a key step on the path to full divestment,” RBS chief executive Ross McEwan said in a statement. “Selling Citizens will significantly improve our capital position and help us to create a strong and secure bank.”

RBS’s investors were disappointed by the results, pushing the stock down 1.2% in early trading Wednesday.