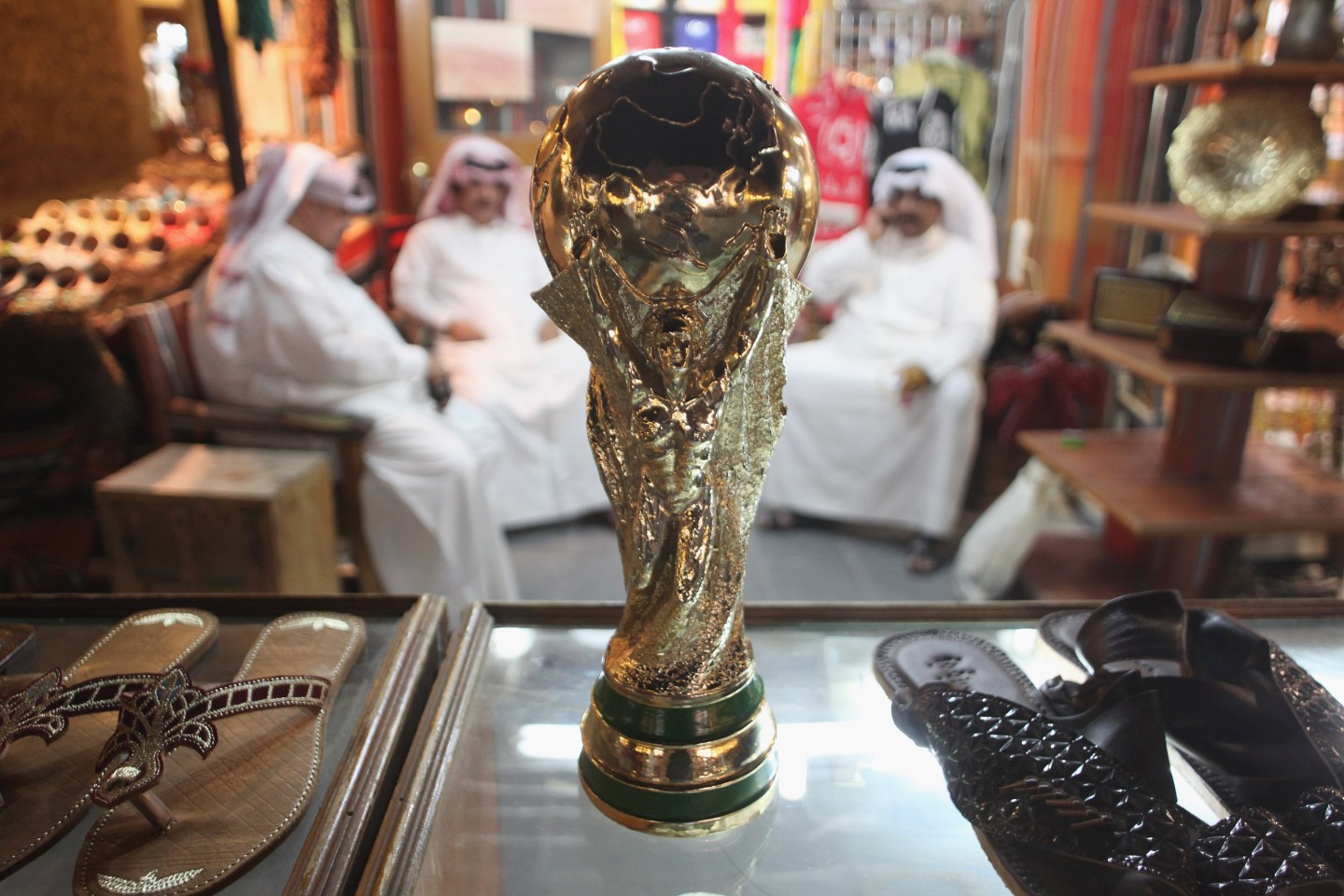 DOHA, QATAR - OCTOBER 24: Arab men sit at a shoemaker's stall with a replica of the FIFA World Cup trophy in the Souq Waqif traditional market on October 24, 2011 in Doha, Qatar. Qatar will host the 2022 FIFA World Cup football competition and is slated to tackle a variety of infrastructure projects, including the construction of new stadiums. (Photo by Sean Gallup/Getty Images)
Photograph by Sean Gallup—Getty Images

The Twittersphere was alight Monday with talk of Qatar losing the right to host the 2022 World Cup due to the oppressive heat in the Persian Gulf nation.

But before the United States begins a campaign to retake the tournament it narrowly lost to Qatar, there are few things to consider.

1. The person saying the tournament will be taken from Qatar is FIFA executive committee (Exco) member Theo Zwanziger. He has long been a critic of Qatar hosting the tournament and, more importantly, is a lone voice among 24 executive committee members. FIFA has already said he speaks for himself and his comments are his own opinion. It still would take the entire committee and a messy and untested process to strip Qatar of the bid. There would also be plenty of lawsuits, including from the European and American companies that stand to make billions by building entire cities, stadiums and transport systems in Qatar.

2. No one can use the heat card at this stage of the game. Qatar faced intense scrutiny in the run-up to the bid over the fact temperatures reach 110 degrees at the time the tournament will be played. FIFA even raised a red flag over the heat and that should have killed the bid. In its technical report ahead of the tournament, Qatar was the only country rated “high risk” of all the bidders for 2018 and 2022 based on a current assessment of stadiums, transportation and accommodation. Among the concerns were that Qatar’s desert heat posed a risk to players and officials. It didn’t sway the executive committee, which came away convinced that Qatar has the money and technology to keep stadiums and fan zones cool.

3. If the technology fix fails, move the tournament. Like the heat, there has been talk for several years of moving the tournament to winter when temperatures in Qatar are much cooler. FIFA President Sepp Blatter has already said the tournament cannot be played in the summer, joining the likes of Franz Beckenbauer and UEFA president Michel Platini who want it moved. Of course, a move like this will upset European leagues ,which would have to totally revamp their schedules. But FIFA said earlier this year that it was going through a consultation process.

4. Rather than the heat, it would seem corruption would force a rebid of the tournament. But again, that seems to be losing steam. Qatar has long been dogged by allegations that it bought off voters — who ignored the heat — and several newspapers stories in England have said they have evidence to support the charges. That prompted FIFA to hire special investigator Michael Garcia to look into the bidding process of the 2018 and 2022 tournaments. The 350-page report, according to The Sunday Times, has been filed with FIFA, but the organization’s rules prohibit it from publicly naming names or releasing the 200,000 pages of evidence behind it. That tells me that maybe a few FIFA executives will get a slap on the hand, but Qatar will escape punishment.

5. Following the vote for Russia (in 2018) and Qatar, Blatter said soccer was heading to new lands. He meant that in a good way, since he couldn’t have envisioned an invasion of Ukraine, or the streets of Doha in the summer. And much like his support for the 2010 World Cup in South Africa, these two tournaments are part of Blatter’s controversial legacy. He won’t give them up easily and will fight for them until he retires — something that appears to be several years away. The 78-year-old Blatter announced plans earlier this year to run for a fifth term as president that would likely see him in charge of FIFA through 2019 meaning it would be too late to rebid either tournament once he’s gone. He also has thrown in a sweetener to the U.S. in case they raise any concerns about Qatar, suggesting the U.S. could play host in 2026.