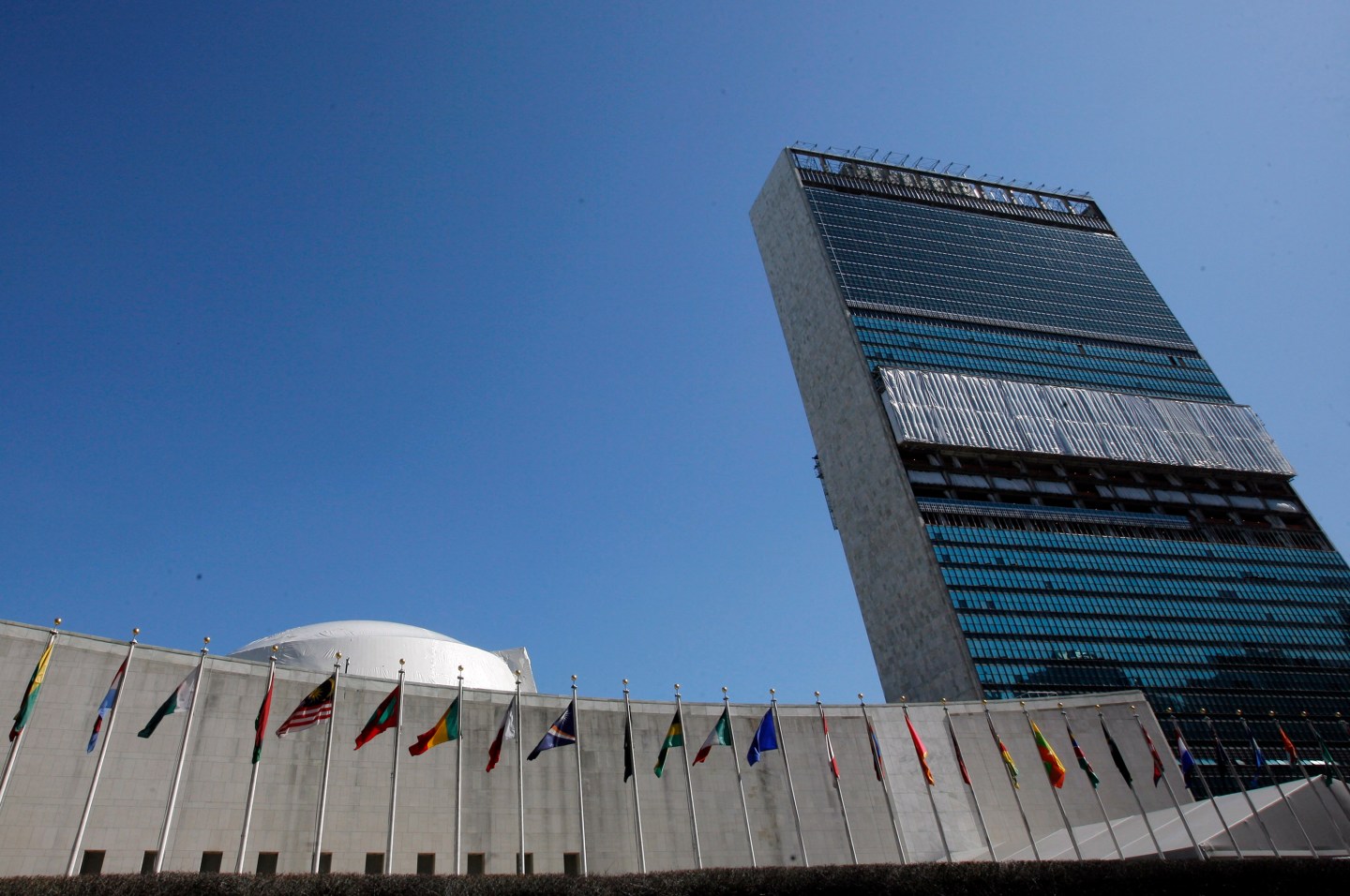 NEW YORK, NY - MARCH 17: A view from outside the United Nations building on March 17, 2011 in New York City. The UN Security Council is expected to vote on whether or not to impose a no-fly zone on Libya as Libyan leader Muammar Gaddafi continues to use air strikes against the rebels in his country. (Photo by Monika Graff/Getty Images)
Photo by Monika Graff—Getty Images

A few years back at a United Nations climate talks in Bali, business executives hunkered down at a nearby hotel and talked mostly how they could make money off the problem. Outside, angry protesters accused carbon traders of trying to get rich off the poor.

Fast forward to Tuesday, when many Fortune 500 CEOs will get a ringside seat at the U.N. climate summit in New York. About 125 presidents and prime ministers are expected at the one-day event featuring world leaders laying out their visions for combating global warming. Then, executives from the likes of Royal Dutch Shell, McDonalds (MCD), Unilever (UN) and Ikea will get lunch with Secretary-General Ban Ki-moon to talk further about climate change.

“Business is increasingly focused on trying to, in some cases, be part of the clean energy revolution that is increasingly going on around the world and increasingly gathering force,” he said. “It’s a very, very positive sign that CEOs are recognizing this issue as something that they either want to deal with in a very effective — in a way that’s good for business, or have to deal with because it’s going to affect their business whether they like it or not.”

Many executives are expected to detail actions their companies are taking to tackle climate change while about 30 CEOs will agree to set an internal price on carbon and advocate more broadly for carbon pricing which the World Bank and others contend can inspire countries to regulate emissions and drive technology innovation.

While the summit is not expected to produce any breakthroughs, the day will not be short of star power.

President Obama will come out in support of a new climate deal. Former Vice President Al Gore will join the new U.N. representative on climate change Leonardo DiCaprio in an effort to inspire leaders to commit to forging a legally binding international agreement by December 2015 in Paris. It would call for countries to set emissions targets by 2020 and provide tens of billions of dollars in financing to help poor countries adapt to climate change and transition away from fossil fuels.

The meeting comes in the wake of a flurry of reports from business groups, the United Nations and the White House demonstrating the increasing cost of inaction and the benefits of embracing a greener future. A report out last week found that tackling emission doesn’t have to slow the global economy, while another out earlier this summer from the White House warned that failing to act could cost upwards of $150 billion a year ad go up 40% for each decade the world fails to act.

At the same time, Fortune 500 executives have been falling over another to announce renewable targets, commitments to cut their own emissions and calling out laggards for opposing a new climate deal.

“In Copenhagen, businesses were left waiting at the altar for governments to solve the problem,” Lou Leonard, WWF’s vice president of climate change, said of the failed 2009 talks.

“After that experience, many in the private sector decided to move forward on their own climate action plans, without waiting for government,” he said. “In the US, key businesses like Walmart (WMT), Mars and Proctor & Gamble (PG), are helping create a revolution in the power sector by switching to 100% renewable energy.”

On Monday at the opening of week of climate related activities, the World Bank announced that 1,000 companies were joining 73 countries and 11 regions to come out in favor of putting a price on carbon — either through a tax or through a cap and trade system. Others, like Hewlett Packard, announced plans to reduce emissions intensity of its product portfolio by 40 percent from 2010 levels by 2020 while Apple’s CEO Tim Cook called for greater transparency among businesses on climate change and the environment.

“Companies have to communicate to consumers about what they are selling and they have to do it in a way that incorporate the whole of their footprint not just one piece of it that they are looking good,” Apple CEO Tim Cook said. “If you have enough companies that begin to do this, then consumers will vote with their dollars.”

Many business groups said the increased activity from businesses is more than idle chatter. They are moving in the right direction and just need a stronger policy signal from governments and the United Nations to go even further.

Ceres, the Boston-based organization that promotes sustainable practices, said 43% of Fortune 500 companies now have clean energy targets and that the number of institutional investors committed to tackling climate change has grown from 10 in 2003 to 110 in 2013 representing $13 trillion in assets.

“Many in the business community, and in unprecedented numbers at this point, are eager for climate action,” said Ceres President Mindy Lubber, who is projecting that businesses will reduce their emissions by 25%, improve energy efficiency of operations by 50%, source 30% from renewable sources and reduce electricity demand by 15% by 2020.

“From unlikely candidates like General Motors and Nike and General Mills to Apple, businesses are seeing first hand the devastating impact of climate change and realize this is not good for the planet or the economy,” she said. “They do not like what they see. They want stronger and clearer signals, stronger climate policies in Washington and around the world. They want an international treaty in Paris in 2015.”

Business, according to U.N. Climate Chief Christiana Figueres, are also driving a booming clean energy sector which aims to shift the world’s economy away from its dependence on fossil fuels. Global investment in clean technologies is now up to $300 billion a year and the low carbon economy is now worth $4 trillion globally and is growing at 4% a year.

“The cost of solar energy has come down 80% since 2008. That doesn’t happen just by happenstance. That happens because there are companies out there and governments deciding to inject research and development funding into this industry to bring down the cost of production,” Figueres said. “Wind very similar has come down 50% in cost and increased 40% in efficiency …It’s because of a very clear corporate decision that this is the future.”

But there is much more the business community can do and many leading executives who remain unconvinced urgent action is needed. The likes of Exxon and BP won’t be at Tuesday’s summit and the U.S. Chamber of Commerce, the world’s largest business lobby, is leading the opposition against Obama’s Clean Power Plan which calls for a 30% reduction in emissions by 2030 from 2005 levels. They fear the plan will damage the economy but do little for the environment.

Environmental groups also will be looking Tuesday to see if more companies demonstrate they are making emissions cuts in line with the science and also ensuring that they are “not associating” themselves with companies that are harming the planet.

“To date, we only found that 30% of companies are aligning their lobbying with their corporate social responsibility commitments,” Jennifer Morgan, the director of the World Resources Institute’s climate and energy program. “So look and listen for companies like Unilever which recently left (pro-business group) Business Europe to see if they are ensuring consistently between company climate change positions and that of various business associations.”