The cult of the Amtrak Quiet Car 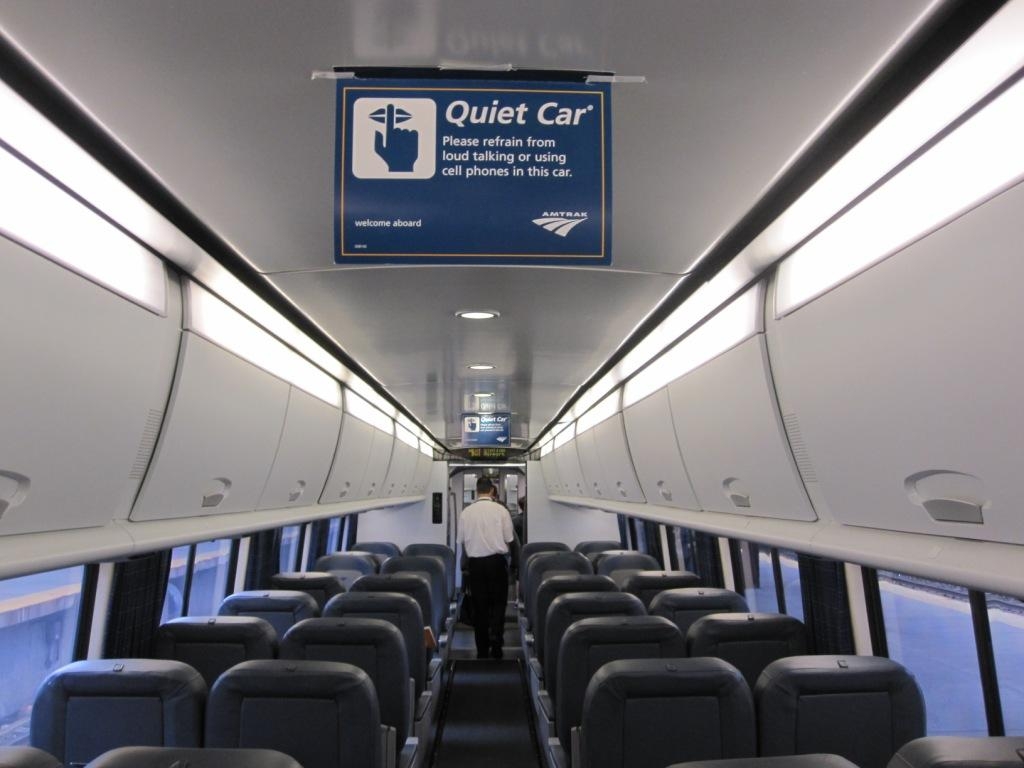 I am a self-diagnosed noise freak. Ever since childhood, I have been sensitive to sound—and I’ve only gotten more curmudgeonly about it as I’ve matured. It’s not an easy way to be in an increasingly clamorous world, but I go out of my way to find or create peace and quiet, whether it’s glaring at loud talkers on the subway (yes, I’m that person), requesting to move hotel rooms if the sound from a TV seeps through the walls of a neighboring room, or carrying earplugs on my person at all times. (For a related rant from the new issue of Fortune—and how luxury hotels are now marketing silence as a perk—read Silence is the latest trend in luxury resorts.)

So it’s only natural that, as a current New Yorker, a native Philadelphian and a frequent traveler to Washington, DC who beats a regular path on the Northeast Corridor rails, I have a particular fondness for that singular oasis of tranquility: the Amtrak Quiet Car.

The Amtrak Quiet Car is, for the uninitiated, the single car reserved on most Northeast Corridor trains (and a few other routes) where peace and quiet reign. No cell phone use is allowed, no audible noise is supposed to emerge from devices and there is no talking in anything above a whisper. Riders in the Quiet Car are told to maintain a “library-like atmosphere,” and technically speaking, you’re not really even supposed to talk in a library voice for very long. If you plan on speaking at length, says Matt Hardison, Amtrak’s chief marketing and sales officer, “you should really move into another car, even if you’re speaking quietly.” (Quiet Car amateurs, take note!)

I have perfected the mad dash required at New York’s Penn Station to dart down the steps and straight to the back of the train and into the Quiet Car on the Acela or my favorite train, the Keystone; it’s a bit trickier on standard Northeast Corridor trains—there, the Quiet Car is always adjacent to the business class car, but that could be in the front or back depending on the train’s orientation. (Too much detail? Not for Quiet Car fanatics.) While frequent flyers are known to take “miles runs” just for the purpose of racking up miles, I’ve contemplated making a Quiet Run on more than one occasion just to get work done.

I’m hardly alone in my devotion. The Quiet Car is almost always the most crowded car in the train and has attained something of a cult following—and regular riders are known to be militant about enforcing the rules. Violators are more often than not innocent offenders who wandered into the Quiet Car by accident, but Quiet Car devotees shush with abandon. (“It’s really one of those rules that Amtrak plays the minority role in enforcing,” says Hardison, though he adds that “generally people are polite about it.”) Some zealots exit the car just to cough. And many regulars bristle at not just talking or leaky headphones but any kind of audible disruption whatsoever (one recent tweet: “Girl behind me on the #quietcar is laughing in the face of the silence rules and chomping on carrots”). These are my people.

Speaking to Amtrak’s Hardison, I learned that the Quiet Car is actually a bottom-up innovation. In early 2000, a group of regular commuters on the Philadelphia to Washington leg of train 151—an early morning Northeast Corridor train that travels southbound from Boston to Washington—had become fed up with obnoxious cell phone chatter. They pleaded with their conductor until he decided to informally set aside a single car as a noise-free zone. It caught fire, and soon Amtrak expanded the quiet zone to several trains, then all but three trains in the Northeast Corridor, and then to other heavily-traveled routes, including the Chicago-to-Milwaukee “Hiawatha” service and the Capital Corridor between Sacramento and San Jose. (The term Quiet Car was used from the start, but at some point Amtrak registered the name as a trademark.)

Because Amtrak doesn’t sell specific Quiet Car tickets—riders “self-select”—it doesn’t have hard numbers on how many people choose it. But as any regular knows, the Quiet Car is consistently crowded. Perhaps the best indication of its success is the degree to which other commuter trains have adopted similar programs. The Long Island Railroad, Boston’s MBTA and Chicago’s Metra all have Quiet Cars of their own. Philadelphia’s SEPTA has what it calls a QuietRide car; New Jersey Transit has a Quiet Commute program; Toronto’s GoTransit has the Quiet Zone; and Metro North offers—wait for it—the Quiet CALMmute, which are quiet cars on all morning peak inbound and evening peak outbound trains on the Hudson, Harlem and New Haven lines.

Some of these programs stipulate restrictions like you can text only if your settings are on vibrate or mute, and the volume on music has to be low enough so as not to be heard through headphones. Metro-North even has specially-designed “Shhh” cards that explain the rules in English and Spanish that citizen-enforcers can hand to offending neighbors.

Since I had Hardison on the phone, I had the chance to ask him some other Quiet Car questions that had been eating at me. Like, has Amtrak ever thought about charging for the Quiet Car? On the Northeast Corridor, it often fills up by the time the train hits Philly; given the basic rules of supply-and-demand economics, charging might be one way to free up more space. Hardison says Amtrak has toyed with the idea, but there are advantages to having a single-ticket system: customers can go from one car to the other at will, and from a back-end perspective, it’s easier to manage all seats on the train as a single type of inventory. Okay, then what about adding another Quiet Car to each train? Why limit it to just one? Hardison says it’s an idea the company has been exploring. “I think that’s something that we might do,” he says.

And does Hardison himself ride in the Quiet Car? He does, sometimes accidentally. He says on one recent trip, he was running late and on the phone when boarding, and he ran into the nearest car while continuing his conversation. Unbeknownst to him, it was the Quiet Car. “Someone encouraged me to move along,” he says.