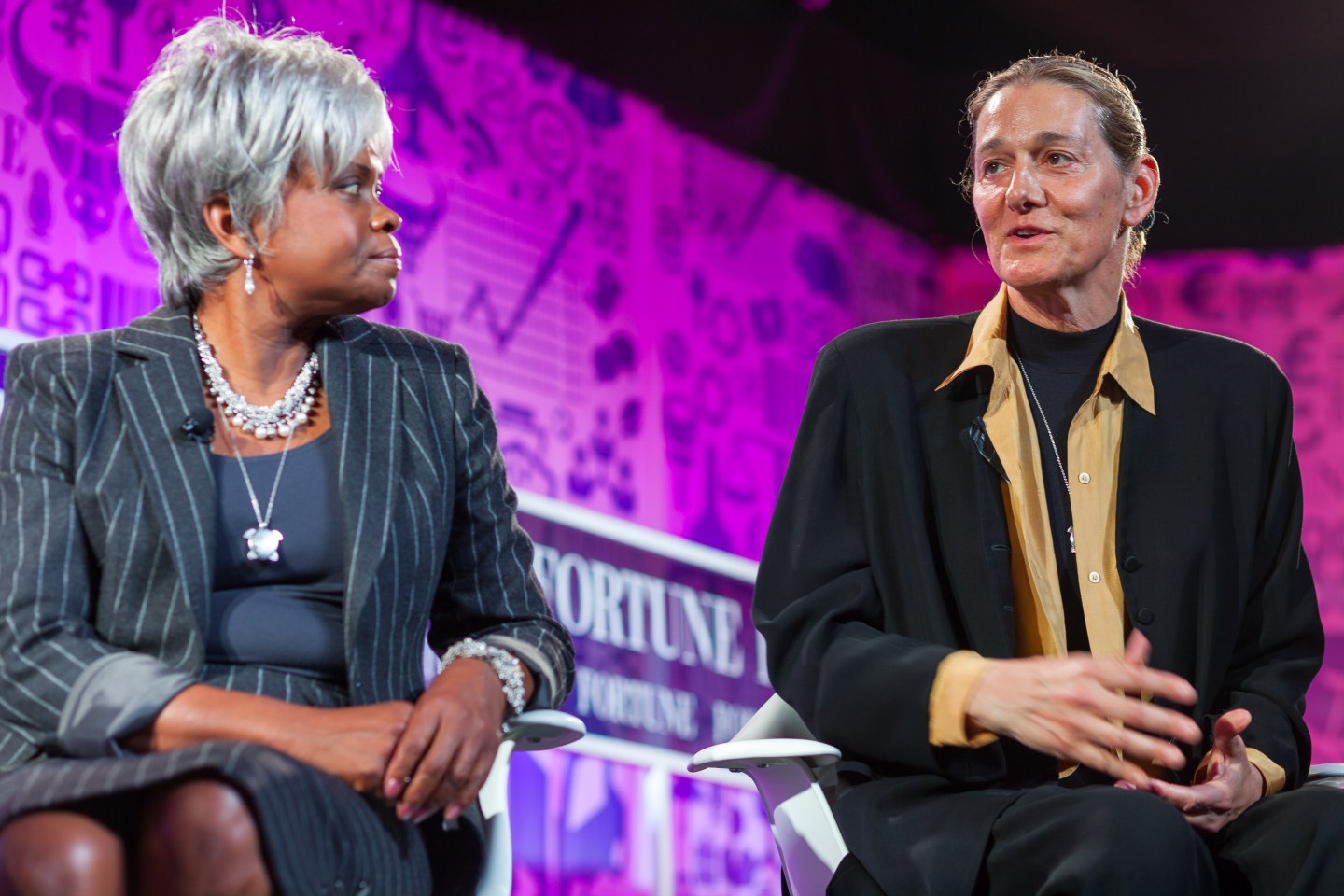 Martine Rothblatt, the founder of Sirius satellite radio and pharmaceutical company United Therapeutics, was the highest paid female executive in America last year with total earnings of $38 million. She also happens to be transgender.

Born “Martin,” Rothblatt became an space law expert and later founded the satellite radio service Sirius (SIRI). It has defied early skeptics and grown into a $20 billion company with more than 26 million subscribers. She also founded United Therapeutics to help find a cure for pulmonary hypertension, a disease that afflicts her daughter Jenesis. As Fortune has noted before, Rothblatt is a polymath whose futuristic ideas sometimes seem far-fetched, if not a little loopy, until they actually become reality.

In 1994, Rothblatt, then a man, underwent sexual reassignment surgery. She has remained married to her wife, Bina Aspen, throughout (her wife even inspired Rothblatt to build a robot in her likeness, named BINA48).

Most recently, Rothblatt is the author of a book about the ethics and morality of cyberconsciousness. She sat down with Fortune to talk about her career and new book, Virtually Human: The Promise—and the Peril—of Digital Immortality.

How does it feel being the highest paid female CEO?

It’s a little bit embarrassing, because all of this attention is on you and I’m not really a person that normally hogs attention. I like to tell people that our ticker symbol “UTHR” [United Therapeutics] (UTHR) stands for Under The Radar. Here I am obviously over the radar, so it’s a little embarrassing.

I feel it’s a little bit awkward, too, because I’ve only been a women for half of my life—and there’s no doubt that I’ve benefited hugely from being a guy. I feel I’ve had what a person who took a woman’s studies course would call “male privilege.” There’s no doubt I’ve had male privilege. So I feel a little bit awkward saying that I’m the highest paid female. I do point out that in all the other years there’s been a woman who has been a woman her entire life, who has identified as being female. I’m more like the exception.

You talk a lot about moving beyond gender—that we should progress, not linger on it, not have these kinds of distinctions. Do you think we can get past the issue without talking about it?

I think it needs to be talked about to get past it, absolutely. When I wrote the book The Apartheid of Sex in ’95, I said gender is going to mean so much less—that people of the same gender are going to be able to get married. At that time, not one state, not one country, not one city anywhere in the world would sanction [same-sex] people to marry. Now fast-forward 20 years. It’s like 50% of the United States, most countries in Europe, even South America, Mexico City, etcetera.

I also pointed out in the book that people would realize that there’s no need to identify a person as male or female from birth. The person can declare their own gender, male or female, or something else. Again in ’95 when The Apartheid of Sex came out that was just ludicrous, outside the realm of possibility. Already there are two states in Germany and one other country in Europe where parents do not have to declare the sex of a child on their birth certificate. You can either choose male or female or just don’t do it. And on numerous different websites there’s a choice of male, female or neither. These ideas that were crazy in the ‘90s are now mainstream. But now there’s a flow, there’s a stream that’s flowing toward the mainstream. I do think that we’ll get past it, but I think that we absolutely have to talk about it to get there.

That’s right. It’s not even bimodal at all, or trimodal. I mean if somebody wants to say, well, “Penis or vagina?” Well, OK. Fine. But who cares about that? You’re talking to all these people, asking what their genitals are. So why is it so important to label people as male or female? I think it’s constricting. On the other hand, I’m a public company CEO, so I’ve got to comply with lots and lots of rules. So the EEOC [Equal Employment Opportunity Committee] comes along and they require everybody to say if they’re black or white, male or female, so I make sure that everybody in the company complies with those rules.

Of the world’s most powerful women in business, people have generally heard of Mayer (Yahoo CEO Marissa Mayer), Whitman (Hewlett-Packard CEO Meg Whitman), but Rothblatt not so much. How do you feel about having been so under the radar?

For somebody to say I’m in the company of Marissa Mayer, Meg Whitman, my biggest impression is I’m just honored. If somebody asks, Am I a role model for women? It’s like I said at the beginning. I don’t think I can really claim that because half my life I didn’t have to work as hard as a Marissa or a Meg. I never felt like I must have biological children through pregnancy, and to take that time out. I never had that on me as an obligation or anything. It would probably be most accurate to say that I’m a role model for transgender people, because most transgender people kind of feel like their options are very limited. To let other transgender people see that you can have a happy, successful professional life—I hope I’m a role model for them.

Let’s talk about your book. Why did you write it—what drove you to put this out?

So I wrote it after reading Ray Kurzweil’s book The Age of Spiritual Machines in 2002. I felt I had a kind of revelation. I actually had never thought about the possibility of digital immortality. It had never even occurred to me. The book was written so logically, and it seemed to be based on such solid technology with all of those graphs and data-based reasoning that I found myself being intellectually intrigued by it like I hadn’t been intellectually intrigued by something since satellite communications in the ‘70s.

You can kind of divide my life into sectors: there’s the satellite communications, the biotechnology, then there’s this third area, artificial consciousness, that I had never even thought about. So I got to thinking about it. Meanwhile I had just finished a PhD in medical ethics in 2001. And so I started to have this cross-fertilization of the ethical implications of Kurzweil’s ideas. If we create a conscious computer, does it have rights? Did it ask to be born? Can you just turn it off? If before I disconnect a patient from a heart-lung machine I have to get their consent, or before I take their organs I have to get the consent of their family—who’s consent do I have to get before I create the kind of artificial consciousness that Kurzweil talks about?

In your book, you talk about aggregating information from social channels and e-commerce purchases and all these sort of things and using that to make a picture of a human—

A “mindfile,” right. And downloading all of this into, say, a robot.

Although, that’s not necessary. I point out in the book, downloading them to the robot, that’s something I did as an experiment with the BINA48 robot. But the vast majority of the book points out that people living in cyberspace—I think they would love to have an embodiment—but they would also be perfectly happy without one. Just like if a horrible thing happens to you and you lose your limbs, most people do not want to kill themselves, some do, but most people don’t. Would they like to have their limbs back? Absolutely. If they have mechanical legs would they rather have cellular regenerated legs? Absolutely. So I think that for the first half of the century we’re not talking about robotic implementations, we’re just talking about people living as virtual beings. Hence, the title: Virtually Human.

What’s the biggest misconception that people have about you and your work?

What do you mean by that?

One of the most difficult things I did recently was getting my IFR [instrument flight rules] pilot certification. That means that you’re able to fly a plane when you can’t see the ground, when you’re in the clouds. You have to take a very challenging written test and a very challenging flying test. I flew about four times as many hours as the average. I’m not saying I couldn’t have passed it sooner, I didn’t want to fail it, so I maybe was overkilling a little, but I had to work really hard at it. When I studied for the IFR exam, I’m a person that can’t just read something and remember it all. I have to read it and write it. I’ll read it, I’ll take notes and outline, then I’ll condense that outline. I’ll try to make pneumonic words to remember the three things you have to do when you’re facing a wake behind a jet plane. I have to work really, really hard to do well at something. If I was all that super smart, I wouldn’t have to.

Whom do you admire?

Right now the person I admire so far in the way of anybody is Dean Kamen. I admire him the most. Firstly, he’s a hugely successful entrepreneur. He’s most famous for inventing the Segway, but that’s actually the least of all his many accomplishments. Twenty years ago he started an organization called FIRST—its an acronym that stands for: For Inspiration and Recognition of Science and Technology—and its an international competition for kids in elementary school, junior high and high school to build robots in a structured competition. It’s not a smash ‘em up competition but its actually like an athletic sports competition. It’s meant for kids to get into STEM [Science, Technology, Engineering and Medicine]. There are now over 100,000 kids who participate every year in this competition, and the grand finale is held in the Houston Astrodome. I’ve been there. To see thousands and thousands of kids, boys, girls, people from all different countries super excited about science and technology—they paint their faces and stuff like that. There’s all just super positive energy. And [Kamen] does all that not to make money or anything, but as a thing that will maybe tilt the world in a better direction. On top of that, he invents all these super cool medical technologies. He did a mechanical arm for people who have lost their arms. That kind of stuff makes him my hero.

(Interview was condensed and edited for clarity)