Why an FBI-style investigation could be good for Goodell 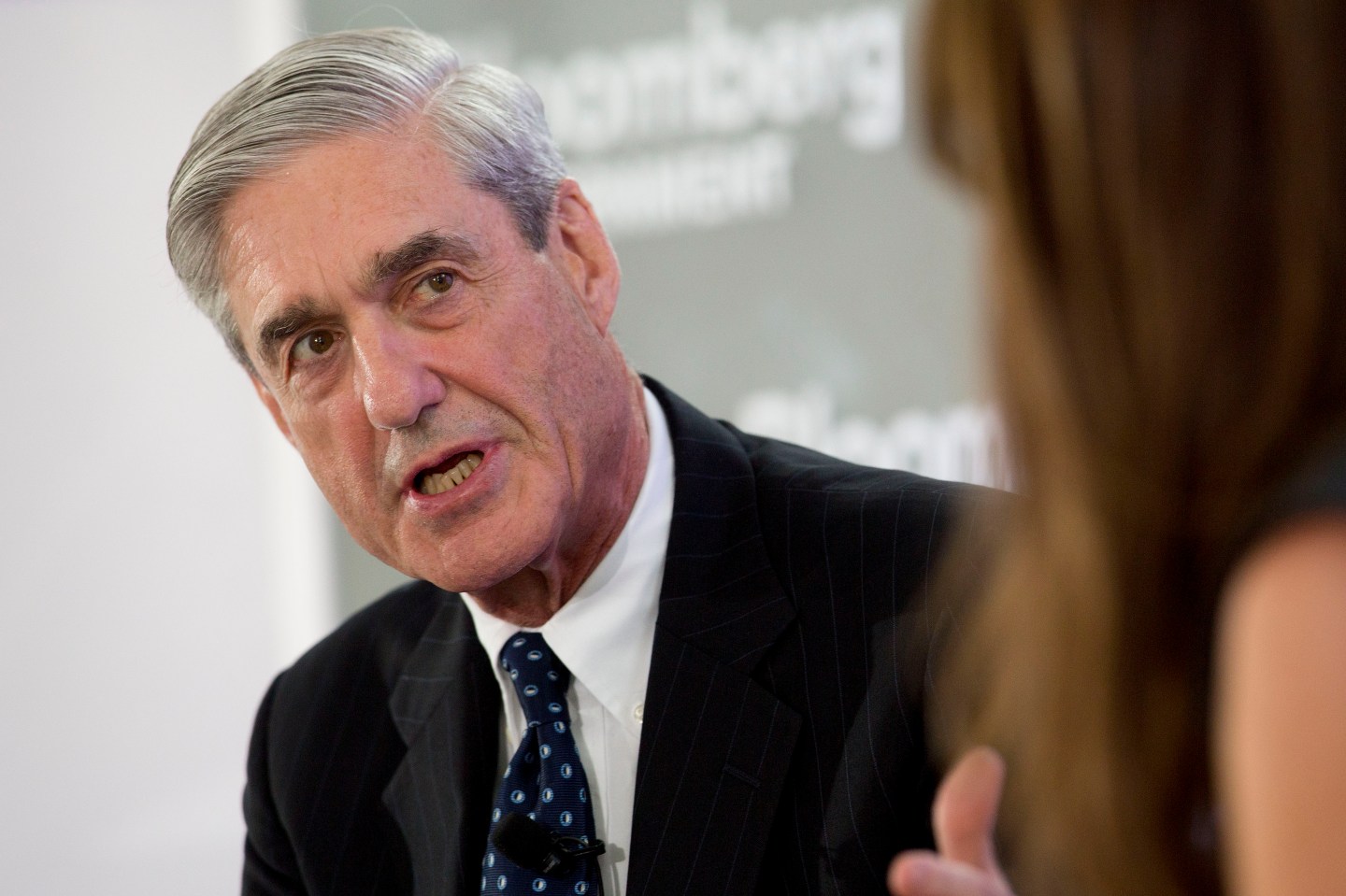 Something is rotten in the state of football.

The question of the week has been whether Roger Goodell, the NFL’s beleaguered commissioner, had seen the Revel Casino elevator footage of runningback Ray Rice punching his then-fiance in the face when he made his much-derided decision to suspend Rice for only two games this season. The NFL has staunchly insisted it never had access to the footage. But on Tuesday, gossip site TMZ reported that Goodell knew that the footage existed, but chose not to ask for it. And an AP report yesterday went further, saying that a law enforcement official had indeed sent the footage to someone at the NFL back in April. There is also audio of an NFL employee confirming receipt and saying, “You’re right, it’s terrible.”

Terrible, indeed, for the NFL’s top cop if it comes out that there was an intentional coverup. And now the league, in a show of seriousness, has hired former prosecutor and FBI director Robert Mueller to investigate its handling of the Ray Rice incident. Mueller (the name is pronounced MULL-er) is the longest-serving FBI director since J. Edgar Hoover. He took the directorship exactly one week before Sept. 11, 2001, and he left exactly 12 years later. After stepping down in September, he immediately joined the law firm Wilmer, Cutler, Pickering, Hale & Dorr—a common path for ex-FBI directors. You can bet that the NFL also considered hiring Louis Freeh, who preceded Mueller as FBI director and has investigated sports bodies such as FIFA and the New Orleans Saints, for this case. But his 2012 report on the Jerry Sandusky child abuse at Penn State University was met with enough controversy that it may have lost him this assignment. (Read Fortune’s in-depth profile of Louis Freeh from last summer: Louis Freeh, private eye.)

Mueller has credibility and a track record of heading up sensitive investigations, including, most recently, the Boston Marathon bombings. And credibility is just what the NFL requires in this matter. But will it be credible if Mueller’s eventual report finds Goodell free of wrongdoing?

That outcome is a very real possibility. That isn’t to say the investigation will not be “independent.” Scroll through tweets on this issue right now and you’ll find a lot of people doubting that the investigation will be truly independent, because it was the NFL who hired Mueller. But in these matters it’s typically the entity under fire that requests an investigation. And the investigator’s findings are not always favorable to the entity that hired him or her. When Penn State hired Louis Freeh in 2011, Freeh reported to its board of directors, and his scathing report found fault with the university and its prized head coach, Joe Paterno. When the Miami Dolphins hired attorney Ted Wells last year to investigate locker-room bullying and the issues between Richie Incognito and Jonathan Martin, Wells reported to Dolphins owner Stephen Ross, and his report was terribly damaging for the franchise. In the 1989 investigation of Pete Rose for betting on baseball, lawyer John Dowd, whose now-infamous Dowd Report led to Rose being banned from the sport for life, reported to baseball’s then-commissioner Bart Giamatti (though it was commissioner Peter Ueberroth who first hired Dowd).

In the Ray Rice investigation, Mueller will report to Pittsburgh Steelers owner Art Rooney and New York Giants president John Mara. The two most recognizable leaders of the league’s 32 owners are Bob Kraft and Jerry Jones, but they are longtime supporters of Goodell—as are many of the owners—and Jones is dealing with his own problems right now (a sexual assault lawsuit). Going with Rooney and Mara, whose families have been in football ownership for decades, is a way for the league to look attuned to its history. The fact that two owners are overseeing the investigation does not question its reliability. As John Dowd joked today on the ESPN radio show Mike & Mike, recalling his investigation of Rose, “I can’t report to god, I’ve got to report to someone. So reporting to a couple of owners, that’s fine.”

Roger Goodell has been very good for the NFL’s owners. And it is important to remember that no matter how much the tide of public opinion has turned against Goodell (and it has indeed turned), it doesn’t matter one whit what the public, or what the media, thinks or says about Goodell. The people who will decide the commissioner’s fate are the league’s 32 owners. And under Goodell the NFL has steadily grown revenue (it’s estimated to have brought in more than $9 billion last year), expanded its global reach, and pushed digital innovation. (Goodell personally oversaw the development of the sport’s ambitious new mobile video platform, NFL Now; see: Are you ready for 24/7 football?) There is a good chance most of the owners are hoping the report will provide an excuse to keep Goodell, not fire him.

So, what can we expect from this investigation? First of all, it will be long—maybe weeks, maybe months, but at least a lot longer than what the media and fans devouring each new twist in this news cycle want. The public wants a result immediately, but will not get it. The Wells investigation of the Miami Dolphins took three months. Freeh’s investigation of Penn State took eight months. And during the time that it takes Mueller to thoroughly investigate how this issue was handled, and to determine who knew what, and when, Goodell will remain commissioner.

This long wait time will benefit Goodell and the NFL. Although it is hard to believe right now, with the Ray Rice video a topic of national news attention, fans will move on. When it broke, the Richie Incognito story—he was accused of aiming frequent racial taunts at a black teammate verbally and by text-message—earned nearly equal attention and zeal for a few weeks. Then attention spans waned, flared back up again when the Wells Report came out, and eventually evaporated completely. Incognito is without a team right now, but is eligible to play, and most likely will suit up again.

The Rice story is different, you might say, and far more grave than bullying—it is about domestic violence. But consider this: Carolina Panthers defensive end Greg Hardy was recently convicted on two counts of domestic violence; he is still playing this season (because he has appealed). San Francisco 49ers defensive end Ray McDonald is being investigated for domestic abuse; he is still playing this season. There has been no comparable backlash over the league’s handling of these two—but where viral video is involved, the reaction is always loudest. The NFL very clearly has an off-field violence issue, one that it has failed to properly address. Now those chickens are coming home to roost, but by no means does it mean that the 32 owners will shunt aside a commissioner who has brought big money to their coffers.

My colleague Dan Primack wrote a piece yesterday headlined, “Roger Goodell is going to get sacked.” I respectfully believe that his prediction was rushed. “If the AP story is accurate, there is just no way for the NFL to maintain any semblance of credibility… with Goodell at the helm,” Primack wrote. The AP report suggested not that Goodell had seen the footage, but knew of its existence. If only the latter is true, Goodell will likely survive this storm.

In fact, that the league has initiated this investigation makes it more likely Goodell will keep his job. “I’m sure Bobby Mueller will do a very honest job,” Dowd said today on ESPN radio. “He’s a great lawyer, was a great director of the FBI, and I’m sure he’ll call it straight.” Mueller will take his time with this, and perhaps his investigation will reveal that there was an intentional coverup, led by Goodell. But if his findings show anything else—that the botched job can be pinned on underlings, for example; or that Goodell knew of the footage but decided not to view on the reasoning that the standard rule, at that time, was a two-game suspension; or that the person at the league kept the footage from Goodell, either intentionally or accidentally—than the commissioner who talks so much about “protecting the shield” will avoid having to fall on that shield.