Websites against Internet slow and fast lanes give visitors a jolt 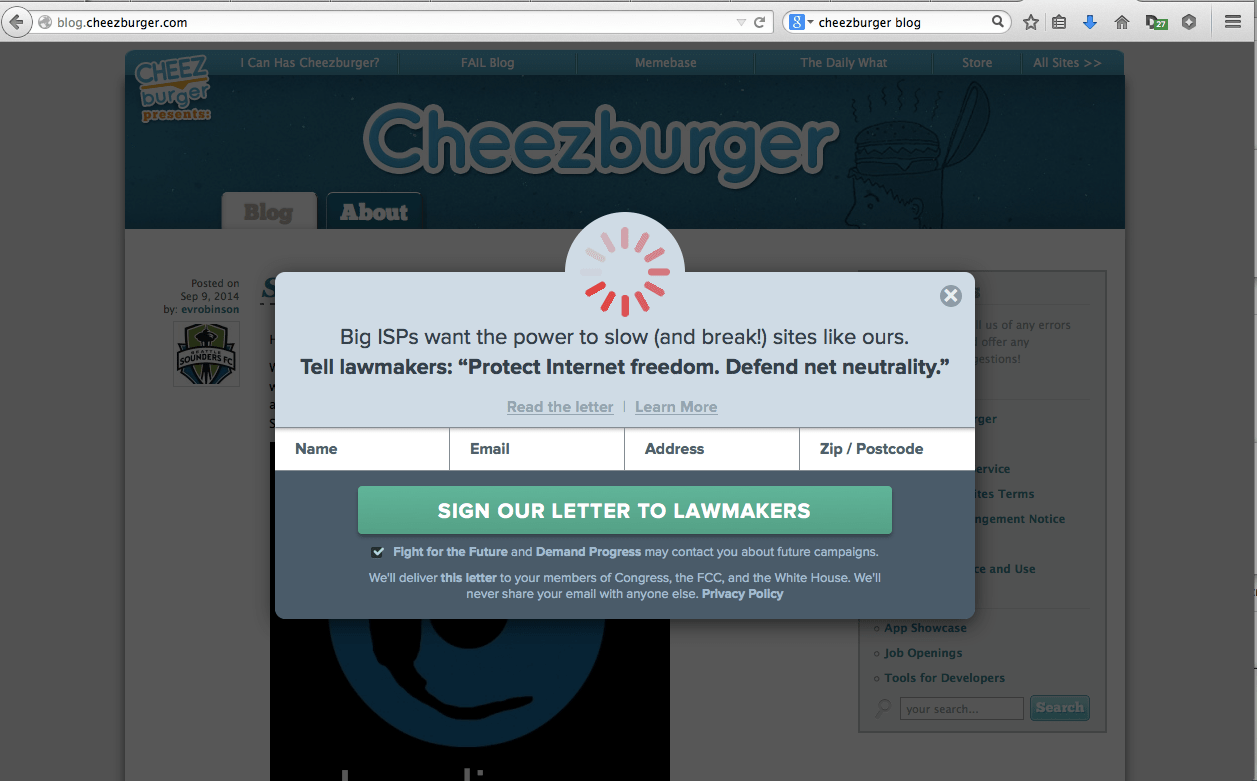 If you’ve spent much time on the internet today, you’ve likely encountered an advertisement featuring a fake “loading” icon – as if it’s taking an inordinate amount of time for the website to appear on-screen.

It is part of “Internet Slowdown” campaign by Fight for the Future, an organization dedicated to maintaining network neutrality, the idea that all Internet traffic should be treated equally. The group wants to stop the Federal Communications Commission from allowing Internet service providers to give faster service to websites that pay for it.

Companies that have participated in the “slowdown” — which is only symbolic, and does not actually affect the speed at which the various sites load — include Netflix (NFLX), Etsy, WordPress, Upworthy, Vimeo and Tumblr. Clicking on the ad takes online users to a site where they can either sign a letter or place a call to Congress, the White House or the FCC to demand net neutrality.

Fortune spoke with Tiffiniy Cheng, the co-founder and co-director of Fight for the Future, about today’s action and what lies ahead for the net neutrality movement:

What does today’s protest represent?

The Internet is coming out even stronger to make sure that the FCC can’t ignore what Internet users are asking for. We will be driving comments to the FCC, Congress and the White House. All bodies have a roll to play in making sure that the Internet is open and neutral.

How did the idea for the “Internet Slowdown” protest come about?

In some ways it was organic, and in some ways it came out of our team thinking about what fast lanes and slow lanes would look like in a post-net neutrality world. If the FCC is going to continue with Chairman Tom Wheeler’s plan, these slow loafing icons would be on some of our favorite sites. We decided that we should make that very, very clear. It became an obvious idea.

How exactly would the fast and slow lanes work, and what sites would likely end up in the fast lane?

The main problem with the proposal is that the big ISPs, those with a monopoly on the vast amount of the internet, would actually have that kind of control. They would have the power to block certain sites by setting up a cost structure. It’s actually hard to say, because it would come to to who’s going to be able to make those deals. Google (GOOG) or Facebook (FB) can pay whatever Comcast or Verizon demand.

What was the response from the various companies you got in participate in the protest?

Internet users have been asking companies they visit to participate. These companies were seeing what it would actually mean if one proposal passed over another. It’s very clear to some of these large companies that they would be affected as well. Its because we would be putting control into the hands of monopolies. I think that’s why we’ve had a wide range of companies.

What’s next in Fight for the Future’s campaign for net neutrality?

We might be calling for a TV strike, where we ask people to watch the internet instead of watching TV for a week. Right now the Internet provides a great way to watch a lot of TV. We could have a really pleasurable week of watching everything that is available on the Internet, and really show cable companies where it hurts, on their cable TV bottom lines.

How’s the response from internet users been?