Amid Ukraine’s chaos, why Putin moves like a Judo master 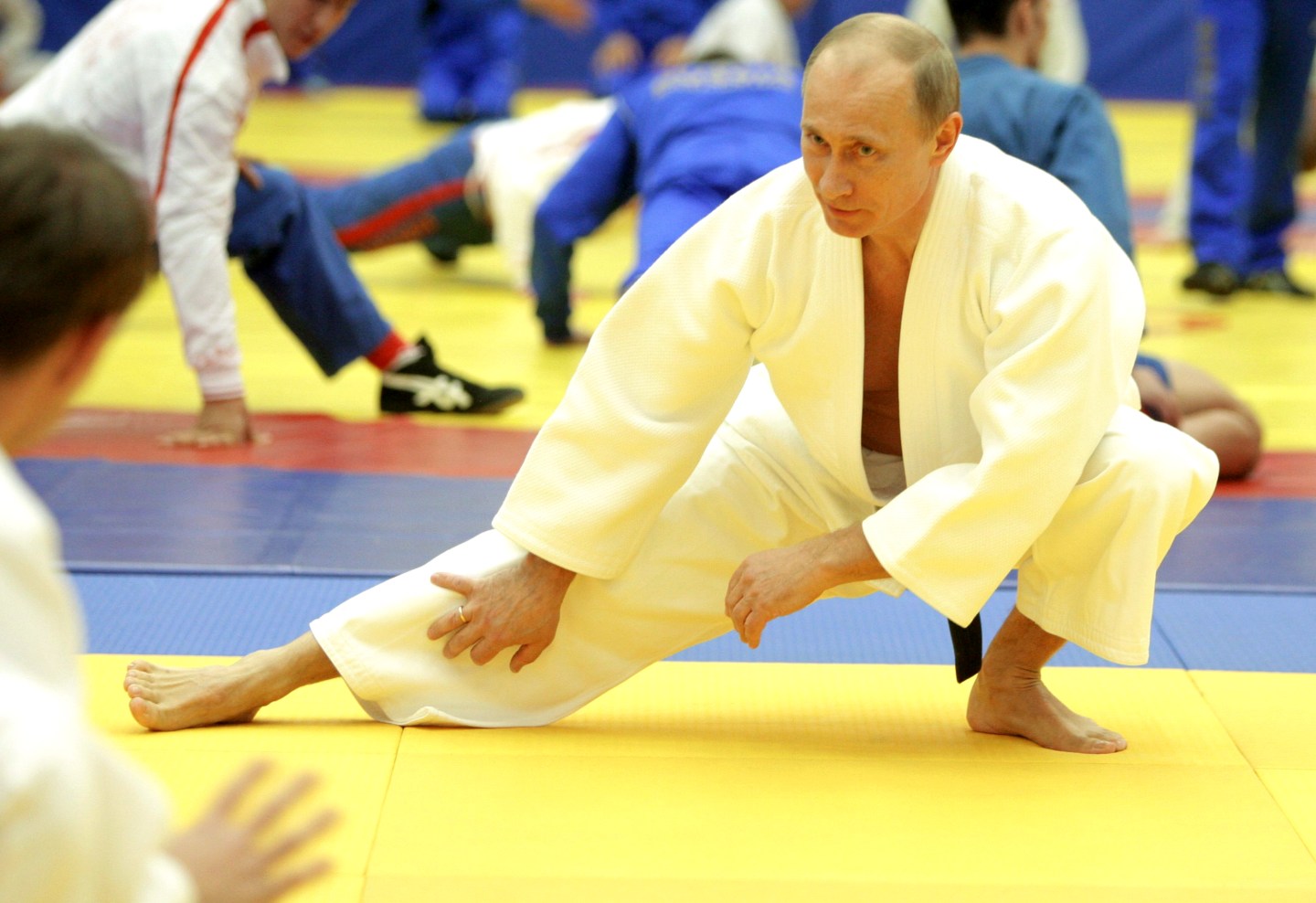 It’s no secret to any student of Russian President Vladimir Putin. The man loves Judo.

Putin started practicing Judo when he was 11 years old and Nikita Khrushchev was still at the top of the Soviet totem pole. He holds a black belt in the sport, is an honorary president of the European Judo Union and has even written a book on the subject, “Judo: History, Theory, Practice.” Last year he was ceremoniously awarded a ninth “Dan” (out of 10) in Taekwondo (for comparison’s sake, that’s higher than Chuck Norris’ eight Dan achievement), and recently attended the World Judo Championship in the southern Urals to view the Russian men’s team take second place to Japan.

Oftentimes, when commentators try to size up state actors and their influence on geopolitics, the discussion quickly turns to the metaphor of a “chess game” – and the current Russia vs. Ukraine (and the West) conflict appears no different (witness this week’s cover of The Economist with Putin standing on a giant chessboard).

Moreover, like any great Judo competitor, it’s likely that Putin will continue to play to his strength by exploiting Europe’s reliance on Russian oil and gas and leveraging his popular support and cult of personality he’s built at home.

As news headlines fly back and forth on talks of ceasefires and additional sanctions between Russia, Ukraine, and the West, we expect Putin’s focus to remain squarely on Ukraine, THE key region where he derives strategic influence over the West. We further expect his meddling to continue roiling global markets throughout the year (Note: on a year-to-date basis the Russian equity market RTSI is far and away the worst performing major global equity market, down nearly -14%).

If there ever were a “grand” strategy vis-à-vis Ukraine, it has greatly morphed over recent months: Russia lost its Ukrainian puppet leader in Victor Yanukovych and Western sentiment toward Russia dramatically shifted after it annexed Crimea and participated (directly or indirectly depending on who you talk to) in the downing of the private airliner MH17 over Ukrainian territory.

Like a Judo fighter, Putin has the ability to pick his spots of attack. Advantageously, he has the luxury to take a defensive posture (let the opponent strike first) given his strong hand (energy assets). Meanwhile, despite being compared to Hitler by British Prime Minister David Cameron, or claims that he is under the influence of Satan by an Orthodox Church official in Kiev this week, as Adam Gopnik writes in a New Yorker article titled Crimea and the Hysteria of History, Putin may in fact be behaving quite rationally as far as Russian history is concerned:

Since his early days in office, Putin has proactively cultivated a macho cult of personality, flexing his strength at home and abroad. Look no further than the widely-circulated press photos of him shirtless on a horse in the wilderness some years back to more recent videos of Putin “scoring goals” amongst former and current professional hockey players. Putin has created a bravado and brawn that serves to throw off and intimidate opponents while also increasing his appeal at home.

Fresh off the pride of hosting the Olympic games in Sochi and the “success” of annexing Crimea, Putin’s popular support is now riding at all0time highs. According to a Pew Poll, it stands at 83%!

Digging in deeper, Putin has been able to maintain high popular appeal throughout his time in office – and this despite popular uprisings that have toppled and challenged authoritarian regimes throughout North Africa and the Middle East over recent years.

What’s been Putin’s edge to command such support and prevent uprisings at home? As The New Yorker’s David Remnick, a long student of all things Russia, explained recently:

“…Putin was able to do what Yeltsin had not: he won enormous popular support by paying salaries and pensions, eliminating budget deficits, and creating a growing urban middle class. It was hardly a secret that Putin also created his own oligarchy, with old Leningrad pals and colleagues from the security forces now running, and robbing, the state’s vast energy enterprises. This almost unimaginably corrupt set of arrangements, which came to be known as Kremlin, Inc., outraged nearly everyone, but the relative atmosphere of stability, in which tens of millions of Russians enjoyed a sense of economic well-being and private liberty, provided Putin with a kind of authoritarian legitimacy.”

Indeed, yet the risk appears in the ability to disguise a “sense of economic well-being and private liberty.”

Critically, Putin’s authoritarian legitimacy could not be solidified without the country’s resource legitimacy. In what’s known as “Dutch Disease,” the country has relied squarely on its natural resources for economic growth at the expense of developing and diversifying the economy. Will this come home to roost? Like any cycle, Russia may be able to disguise its decline over the medium term, but over the longer term—especially should oil prices abate—things get much more troublesome.

Russia’s energy leverage over Europe clearly remains significant. The share of Russian gas as a percentage of European Union imports has grown from 22% in 2010 to over 30% today. The Economist estimates that 50% of all gas that flows to the EU passes through Ukraine. For a refresher on demand at the country level, the NYTimes offers an illustrative graphic (see below):

While the EU has made developments since periodic suspensions to Ukrainian gas delivery in 2006 and 2009 (for failure to pay incurred debts), they’ve not been significant enough to offset a Russian shutdown. Not only does the eastern bloc (highest = Estonia, Latvia, and Lithuania) have the majority of its consumption tied to Russia, but Netherlands has a 34% exposure, Germany 30%, and Italy 28%. No small potatoes.

Estimates suggest that if Russia were to shut off supply lines through Ukraine (still a seemingly unlikely scenario though a greater leverage point as we move deeper into the colder months), the EU could survive for an estimated three months with current reserves. We call that significant leverage!

In addition, and as my commodity-focused colleague Ben Ryan points out: Europe’s ability to source oil and gas is both limited and much more expensive than Russian-sourced energy. For example, liquefied natural gas that Germany purchases in the international market is about double what it costs when sourced from Russia. Tack on that there is virtually no capacity from the U.S. shale oil boom to help Europe in the immediate, or even intermediate term, and the U.S. has no LNG export facilities.

Finally, Putin has an additional competitive advantage in the recent completion of the Nord Stream pipeline that transfers LNG from Vyborg (near St. Petersburg) up through Finland, and across the Baltic Sea to Germany. In essence, Russia could cut off all supply to Ukraine and not completely isolate the largest European countries.

Despite all the trade sanctions that both Russia and the West may throw at each other, could analyzing the geopolitical posturing be as simple as this? Russia, while playing with a weak economic hand, can hold on to its energy rich leverage, and simply, like a Judo competitor, wait for the West to move before countering?

We think it’s that simple. The promise of Russia intimately mingling with Ukraine for the foreseeable future is high – especially as we move into colder months when heating oil becomes a human necessity.

Jigoro Kano, the founder of modern Judo in 1882, outlined the central principles of the sport: seiryoku zen’yō or maximum efficiency, minimum effort. Is this not Putin’s game plan?

Last week we got a taste of Putin’s tactics: as the West cautiously hailed Ukraine’s announcement that they agreed to a truce (ceasefire) with Russia, Putin allowed the story to gather steam for a bit. Then he commented: well, Russia is not a party to the conflict, so actually Russia can’t be part of a Truce… , or something to that effect. In other words, the West gets tripped on itself, while Putin exerts minimum effort to receive considerable results.

Matthew Hedrick is a senior analyst at Hedgeye, an independent investment research firm.