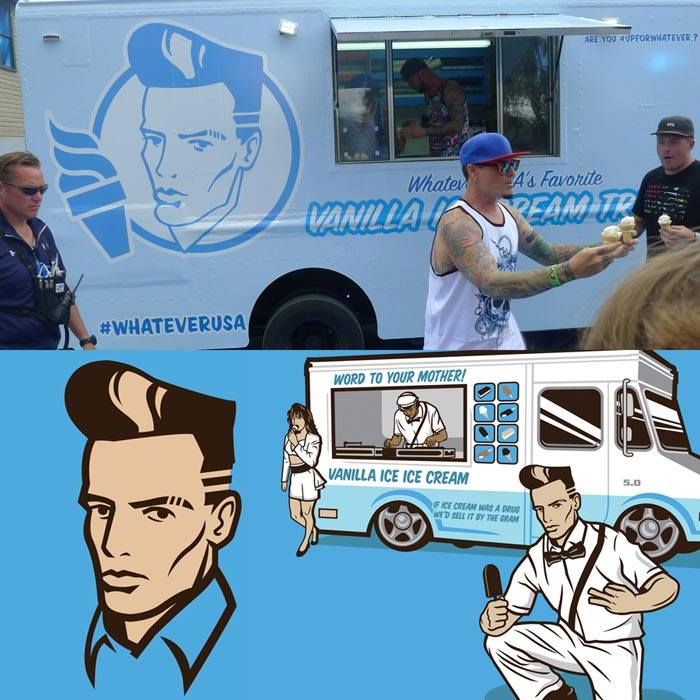 On Sunday morning, designer Ben Douglass woke up to a Facebook message from a friend who noted the eerie similarity between a stunt ice cream truck being used in a Bud Light promotion in Colorado and some artwork that Douglass had created four years ago for a t-shirt design: a Vanilla Ice Cream Truck.

To Douglass, there was no question that someone working on Bud Light’s behalf had lifted his work wholesale. The depiction of the ’90s pop-rapper is precisely the same. Even the font on the lettering is the same. “Ben, did Bud Light pay you for this?” Douglass’s friend asked. No, it did not. “It’s pretty clearly exactly what I drew,” Douglass told Fortune. “I don’t know if it was by accident or what.”

Douglass wrote a Facebook post that has since gone viral, with more than 1,100 shares. “Why should a little mom and pop company like Anheuser-Busch pay artists for their original property when it’s just as easy to take it” he asked his followers. It’s all over Twitter as well.

Douglass is talking to a lawyer, and says he might take legal action against Anheuser-Busch InBev (ABI), which owns Budweiser. “We’re looking to potentially pursue this,” he said. That runs counter to a tweet he sent on Sunday:

He later indicated that the tweet was sarcastic, perhaps to leave his options open.

The tweet from Ice seems to indicate that he had no problem with Douglass depicting his likeness to sell t-shirts.

Ice did not respond to a request for comment.

Anheuser-Busch issued this statement: “Anheuser-Busch and Bud Light respect the property and creativity of artists, and we’re looking into the situation.”

Some of Douglass’s Twitter correspondents wondered whether he might have run afoul of copyright by selling t-shirts using a celebrity’s likeness. Douglass says his lawyer has assured him that he’s on firm ground. They also questioned whether Teepublic, the company that handled production, marketing and distribution of the shirts, might have licensed Douglass’s work for use in the Bud Light campaign without informing him. It didn’t, said the company’s production manager, Jerzy Shustin. “It’s just not something we would ever do,” he said.

The web site Twitchy, run by Michelle Malkin, concluded based on all that highly speculative Twitter chatter that Douglass has no leg to stand on. The article, credited to “Twitchy staff,” concluded:

Here’s the summary as best as we can tell: An artist from New Jersey used Vanilla Ice’s likeness — without compensation to Mr. Ice — to sell T-shirts and now he’s angry that Bud Light is using his artwork in a major ad campaign, but he’s not sure if Bud Light stole his work or actually licensed it.

We’ll update as soon as we know more in what’s shaping up to be a major (snicker) legal battle.

Snickering aside, the case, if it ever ends up in the legal system, likely won’t be a “major” one. But the purloining of art and other creative work online is certainly a major issue. And it’s often big companies doing the purloining. Perhaps most famously, Urban Outfitters has been accused on multiple occasions of lifting the work of independent artists.

“This happens quite a bit in my field,” says Douglass, who creates designs like the Vanilla Ice Cream Truck when he’s not working as the art director at Spitball Advertising in Red Bank, N.J.

Douglass wouldn’t say how many shirts bearing the design that he has sold, but described the number as “low.” Given the viral success of his complaint against Anheuser-Busch, his fortunes might soon change.