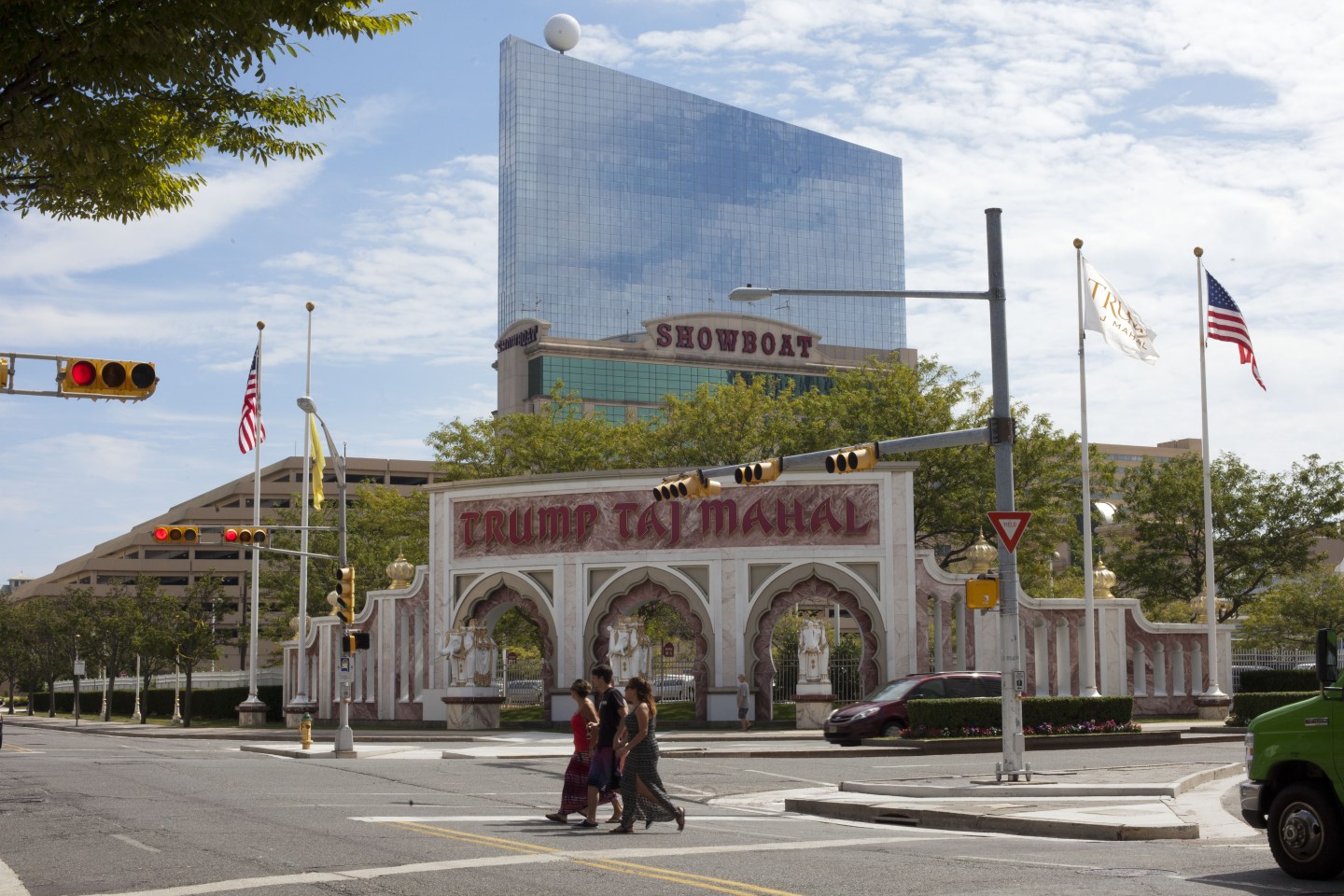 ATLANTIC CITY, NJ - SEPTEMBER 3: More than 5,000 employees at the Showboat and Revel Casinos lost their jobs as both places closed this weekend in Atlantic City, New Jersey. Four of the 12 casinos with which Atlantic City started the year will have closed by the middle of September. That is putting almost 8,000 people total out of work. Trump Plaza is closing September 16, 2014, and the Atlantic Club shut down in January. (Photo by Jessica Kourkounis/Getty Images)
Jessica Kourkounis Getty Images

Trump Entertainment Resorts Inc. filed for bankruptcy again this week, a move that could put another Atlantic City casino in danger of closing at a time when revenue in that market has rapidly declined in recent years.

The company, founded by Donald Trump, owns and operates two casino properties in Atlantic City: the Trump Taj Mahal and Trump Plaza, both located on the boardwalk in Atlantic City. Together, those properties operated over 2,900 hotel rooms. But the Trump Plaza was officially issued a closing notice earlier this month and operations at that casino will end on September 16. That closure comes after two other Atlantic City casinos, the Showboat and Revel, also closed their doors.

Trump Entertainment may also shut down the Taj Mahal later this year, Bloomberg reported, citing people with knowledge of the situation. That additional casino closure would put another 2,800 employees out of work in a city that already is losing 5,200 casino jobs this month, Bloomberg said.

Though Trump Entertainment still features the name of the colorful real estate tycoon, it is notable to mention he abandoned control of those casinos in 2009, when a settlement with a group of creditors allowed casinos that operates in Atlantic City to continue to use the Trump name and likenesses of the mogul and his daughter Ivanka in marketing efforts.

Meanwhile, casino operators in Atlantic City have faced significant pressure, with casino revenue in that market falling by more than 45% since 2006. And unlike Nevada, which in 2010 reversed its fortunes after the global recession, Atlantic City’s decline has shown no sign of reversing. Atlantic City’s gaming revenue has been stung by new casinos in neighboring states and online gambling. Meanwhile, Moody’s Investors Service last month said Las Vegas is a more diverse tourist destination and has also made headway diversifying into the healthcare and technology sector, while Atlantic City relies more on casino gaming and also has high levels of poverty and persistently elevated unemployment.

The casinos founded by Trump have operated in Atlantic City for decades, though this wouldn’t be their first fall into bankruptcy. Bloomberg reported the three casinos Trump owned went through bankruptcy in the early 1990s, and the entire company sought court protection in 2004 and again in 2009, when Trump gave up the chairmanship. A third property that had been owned by Trump was sold to Landry’s Inc. in 2011.

For more on Donald Trump’s relationship with bankruptcy, read: