Jeffrey Katzenberg: ‘Do Good—Just Don’t Do Too Good’ 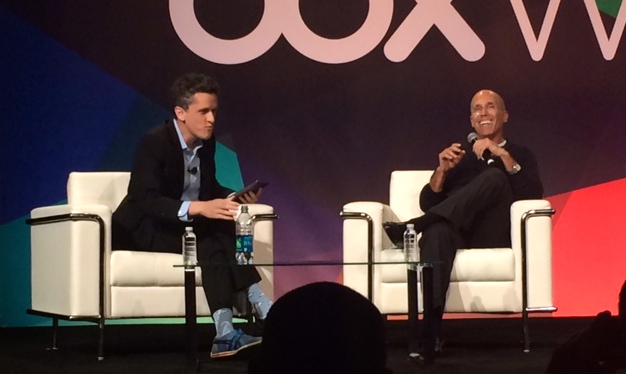 DreamWorks Animation CEO Jeffrey Katzenberg recalls the summer of 1994 like it was yesterday.

Katzenberg was chairman of The Walt Disney Studios (DIS), a role that included reviving its animated film business. And revive it he did. Come 1994, Walt Disney Studios was back on top: “The Lion King” was the No. 1 movie, the top-selling soundtrack with 25 million albums sold, and a blockbuster video game developed by Sega. Oh, and the No. 1 TV show — a half-hour family sitcom called “Home Improvement,” with Tim Allen—belonged to Disney, too. But all that success did little to stop ex-CEO Michael Eisner from firing him over irreconcilable differences.

The lesson learned? “Do good—just don’t do too good,” quipped the 63-year-old Hollywood exec onstage at a conference hosted by online file-sharing startup Box on Wednesday. Katzenberg is now CEO of DreamWorks Animation (DWA), the Glendale, Calif.—animation studio he co-founded with media moguls Steven Spielberg and David Geffen in 2004. Not every film has performed well at the box office—this March’s flop, “Mr. Peabody & Sherman,” cost the studio $57 million in the first quarter—but the studio has also produced blockbusters like “Shrek 2” and “Shrek the Third.” And its most recent film, “How to Train Your Dragon 2,” crossed the $600 million mark in ticket sales this weekend.

The process by which Katzenberg and his studio go about making movies follows a general philosophy he’s followed for decades. “The one thing I always tried to do a little bit better than what I was expected to do,” he said. “When I go into a situation, whether it was an assignment I had, whether it was as a gopher [years ago], retrieving a danish for someone, or when I come into a staff meeting, I think about how I can exceed expectations and have people walk out of those engagements thinking, ‘well, that was a little bit better. I didn’t expect that.’ When people walk into any product or movie of ours, we want it to be a little bit more than what they were expecting. We don’t always succeed, but we really try hard.”

Case in point: Katzenberg’s 40th wedding anniversary with wife Marilyn isn’t until early next year, but the exec is already plotting a surprise for her. “I’m already working on how in the hell am I going to exceed her expectations,” he mused. “So, if you can you exceed the expectations of those people you’re in business with, almost every single time you will win.”