Fueling your car with farm waste is right around the corner 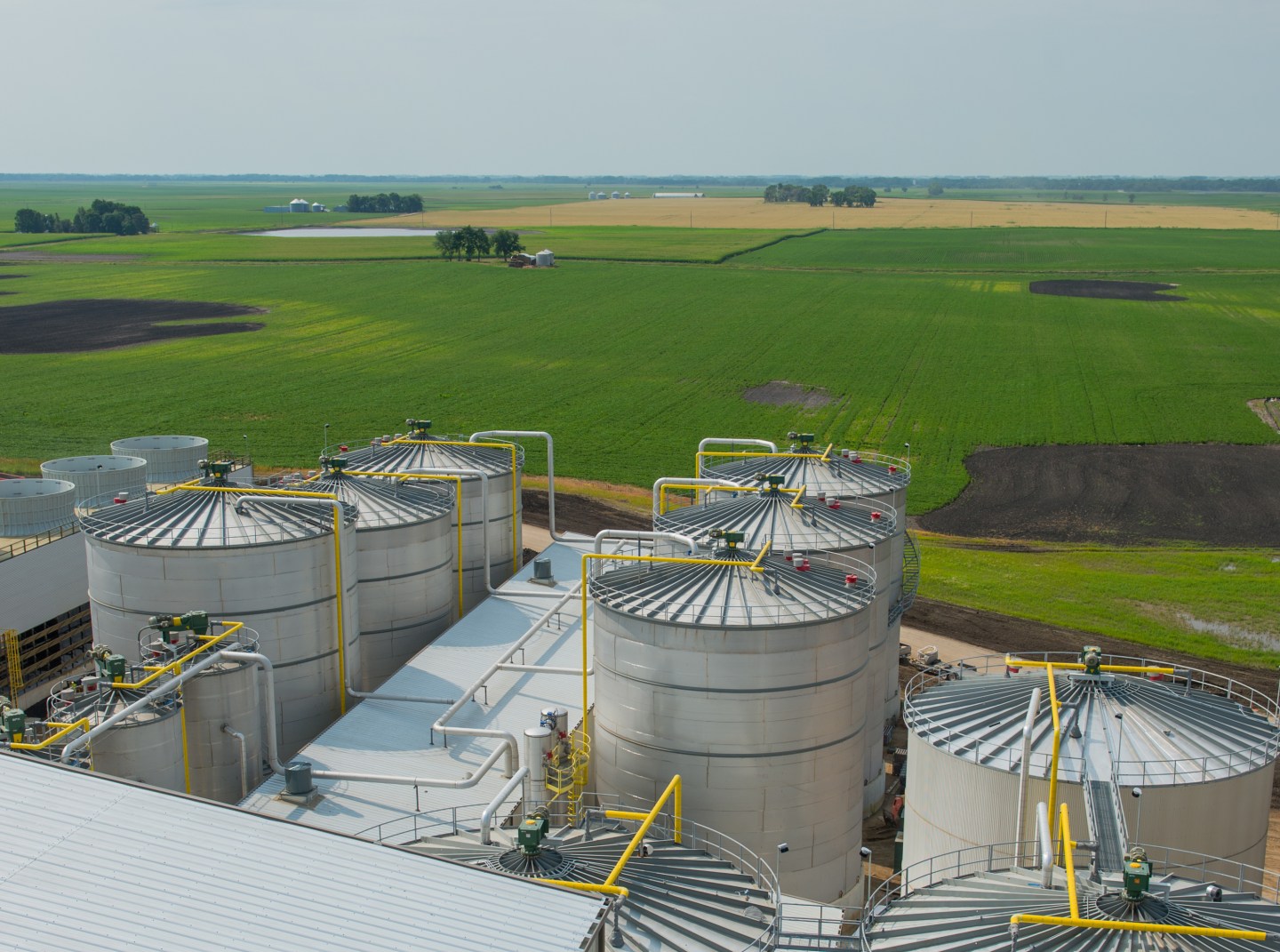 The opening of cellulosic ethanol plants in the American Corn Belt is the next big step toward cleaner energy.

Just down the road from the Wild Rose Casino in Emmertsburg, Iowa, a $275 million factory opens today that proponents predict will be the beginning of a “new era” in clean ethanol energy.

The factory will be the first of several to open this year to produce large-scale cellulosic ethanol, which is made by converting waste or stover from corn plants that are typically left on a field after harvest. Grasses and wood are also used in the process.

The ribbon cutting for Project Liberty is expected to attract big names, including King Willem-Alexander of the Netherlands, since it is operated by ethanol producer POET and Royal DSM, the $13 billion Dutch diversified food and consumer products conglomerate.

“The opening is a reflection of a growing momentum for cellulosic ethanol,” says U.S. Department of Agriculture (USDA) Secretary Tom Vilsack. “It’s a continued celebration of American innovation,” Vilsack told Fortune. “Folks are continually looking for new and creative ways to use non-food feedstock to produce renewable fuel which allows us to continue reduce our reliance on imported oil and create jobs and economic opportunities in the U.S.”

Other ethanol plants are expected to open in coming months. Dupont has announced plans to open a $225 million facility by the end of the year and Spanish multinational conglomerate Abengoa Bioenergia will unveil a 25-million-gallon-a-year plant in Hugoton, Kansas, later this month. The Kansas plant will also produce 21 megawatts of renewable electric power.

The industry has long promised it would deliver second-generation biofuels that would reduce greenhouse gases — 90 percent less than gasoline. By using less farmland, it also helps to alleviate the food versus fuel argument that has dogged corn-based ethanol production. The biofuel industry also struggled to attract financing during the global recession and had to overcome some technological roadblocks to extract the sugars needed to produce ethanol.

The opening of Project Liberty comes after years of delays in the ethanol industry. “It is very slow to get going,” Tyner explained. “The technologies didn’t advance as fast as people thought or hoped they would. Cellulosic feedstocks are really recalcitrant. It is really difficult to break out the cellulose and hemicellulose from the lignant. The lignant is there binding the cellulose and hemicellulose. That is why trees and corn stalks don’t blow over in a windstorm. That gives it strength.”

Feike Sijbesman, the CEO of Royal DSM, said his company spent the last seven years developing a process that separates out the sugars from the stover, treats it with a cocktail of 30 different enzymes to covert the cellulose into C5 and C6 sugars, and then adds microorganisms to convert them into ethanol. “In the past, the technology was not available,” he said. “You need time for developing the technology and you need to build a factory. I would not know how we could have done it earlier.”’

The new facility is expected to produce 25 million gallons of ethanol each year, which will be mixed with regular gasoline. “The mandate for cellulosic ethanol established in 2007 is now up into the billions of gallons and we are going to produce, even with all this new activity, less than 100 million gallons in 2014 or 2015,” says Purdue University Prof. Wallace E. Tyner, referring to the Renewable Fuel Standards passed by U.S. Congress in 2007 to require that a minimum level of fuels must derive from renewable sources like ethanol.

Still, there are real questions over the future of this nascent industry. Cellulosic ethanol still costs more to produce than corn-based ethanol, from 60 cents to $1.67 a gallon. Plants also are coming online at a time when amounts for ethanol mandated to be mixed with gasoline appear to have nearly reached their peak or what are called the blend limits set by the RFS.

The RFS requires that 10 percent ethanol known as E10 to be blended with gasoline and sets a target of 36 billion gallons of ethanol by 2022, with 16 billion of that coming from cellulosic sources. Those targets, however, are proving to be overtly ambitious at a time when fuel consumption is decreasing due to more fuel-efficient cars on the road.

The Environmental Protection Agency surprised the biofuels industry in November by revising its standards, which reduced the number to 15.2 billion gallons, including 17 million gallons of cellulosic ethanol. A final number is expected to be announced in the next month.

“I don’t think the ethanol part of it will be explosive growth. It will grow in all likelihood but it will be slow,” Tyner said.

“Part of the reason is where are you going to put the ethanol,” he said. “We are producing enough corn ethanol to meet the blend wall and even exceed the blend wall. The escape valve this year has been exports, so there is a little room for some cellulosic ethanol. But I see the blend wall being broken down very, very slowly.”

Supporters of the ethanol industry argue the answer is using more E15 which would require increased amounts of ethanol and expanding the infrastructure that would allow of the expansion of flexible fuel vehicles that can take up to 85 percent ethanol. They blame the oil industry for trying to keep a lid on all types of ethanol and putting “at risk” second-generation ethanol.

“The oil companies now have created this new narrative suggesting that the requirements has outpaced the ability of the marketplace to consume these fuels because we can’t blend any more than 10 percent,” says Bob Dinneen, the president and CEO of the Renewable Fuels Association. “Well, they don’t want to blend any more than 10 percent. So they don’t put in the infrastructure for E85. They fight their marketers that might want allow E15 to be sold. They want to create this self-fulfilling prophecy.”

The oil industry counters that there is no point to talk about bringing more cellulosic ethanol on the market until it proves to be commercially viable. “For years, we’ve heard companies claim they will soon produce large qualities of cellulosic fuel, but these rosy forecasts haven’t ever come true,” said Carlton Carroll, a spokesman for the American Petroleum Institute. “Cellulosic biofuel still isn’t being produced on a commercial scale, and companies have never produced anything close to the amount EPA mandates that refiners use each year.”

The new players on the ethanol block admit they are worried over whether the industry could be hampered by cuts in the RFS — including some calls to scrap the standards altogether.

“If there is a clear signal by the administration that the RFS is going to be kept in place and if the administration is gong to show its leadership by maintaining that direction, then I see a huge opportunity here for this new sector to come about,” said Jan Koninckx, DuPont’s director of global advanced biofuels.

As he readies for upwards of 3,000 people to come to Emmetsburg for the Project Liberty grand opening, Sijbesman appears more bullish on the industry’s future — despite potential cuts in the RFS. He says that until now, industry production hasn’t been able match federal mandates. But with the new plants opening, he envisions cellulosic ethanol factories crisscrossing the cornfields of Iowa, Nebraska and beyond.

“Can it be bigger? Substantially bigger,” he said. “Only in the U.S., we think there is room for another 200 factories of this size. If you calculate that the investment for the next factory will be smaller than this first factory and you can do it with $200 million, you are talking $40 or $50 billion of investments.”