A new industry flexes its servos 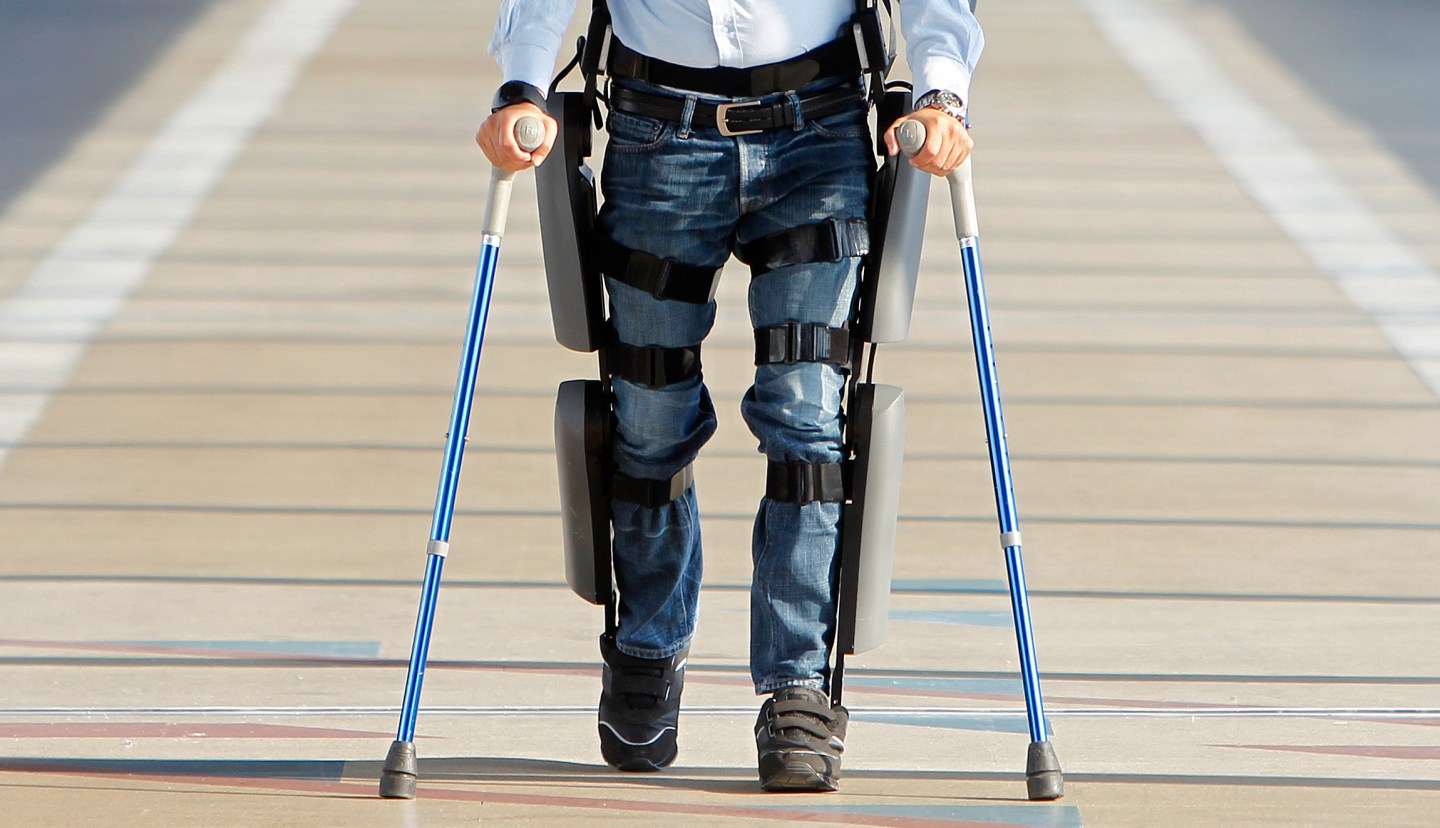 The ReWalk in action at the Rehacare 2012 trade fair in Düsseldorf, Germany.
Courtesy: Argo Medical Technologies

At this year’s FIFA World Cup, the first kick was delivered by a man with paralyzed legs, Juliano Pinto. He was wearing an elaborate exoskeleton suit that enabled him to, remarkably, tap a soccer ball with his foot using only his mind—no buttons, no muscles, just brainwaves.

The engineers behind the suit had developed a system that appears to read the brain’s intentions courtesy of electroencephalographic, or EEG, sensors. It’s not that simple to read someone’s mind, of course, so Pinto had to learn to think—ponder that one for a moment—in such a way that would give the suit orders it could understand.

Exoskeletons have long been a fixture of comic books and futuristic movies, but they aren’t science fiction any more. According to the market research firm WinterGreen Research, the market for rehabilitation robots, active prostheses, and exoskeletons is already worth $43 million and is projected to reach $1.8 billion by 2020. That many people will soon wear different kinds of machines to get more work done is, at this point, nearly a given.

That’s not to say that you will have motors and gears hidden inside your chalk-stripe suit. (Well, you might.) The type of machine to use will largely depend on the type of work to accomplish. For example, BMW announced in January the creation of a new glove that takes the stress off of a single action—inserting a rubber plug in a car’s frame to close drain holes for the paint coat—for workers in its factories. A modest start, sure, but the applications for such tools will only become more elaborate.

Exoskeletons are arguably the most complex category of these tools. They don’t just promise to make it easier to complete a simple action; they promise to support or accomplish some of the most complicated maneuvers our bodies are capable of. With exoskeletons, people with disabilities can do and experience much more than they might have otherwise had reason to believe possible, such as walking. Exoskeletons also promise to allow able-bodied people, such as soldiers, run faster and carry more than the average human body otherwise would.

Simple or complex, why are all of these robotic devices suddenly possible? Oddly enough, it’s because of the rise of the smartphone, says Dmitry Grishin, an entrepreneur and investor who serves as chief executive of Mail.ru Group and founded Grishin Robotics.

“Right now, because of the revolution in technology and smartphones. a lot of components that weren’t designed for robots—cameras, sensors, batteries, processors, and all of that—have become really cheap,” he says. “And that has completely changed the whole industry.”

There are three markets where exoskeletons and their less sophisticated siblings are most likely to first appear: the medical devices industry, heavy industry, and the military. Here’s a look at each.

The first medical device to be approved by the U.S. Food and Drug Administration for home and community use by paraplegics is called the ReWalk, an Israeli-made exoskeleton that takes cues from upper body movements to take steps, stop, and sit down. Clinical rehabilitation is one of its major selling points.

There are something like 240,000 people with spinal cord damage in the U.S., says Anne Spungen, associate director of the Spinal Cord Damage Research Center in New York. Spungen has investigated the uses of exoskeletal walking devices, including the ReWalk, at the Veterans Affairs facility in the Bronx where the center is located. The VA is the largest provider of services to people with spinal cord injury in the United States, serving approximately 22,000 of the 42,000 veterans with the injuries.

There are several other platforms for paraplegics besides the ReWalk, including the Ekso, Indego, and REX Bionics. “My motto is not to compare these devices to each other. They are all good in some way,” Spungen says. “We need the field to advance. We need them all to come forward.”

The first patient took a ReWalk home in July. It’s not cheap. The price for one is $69,500, and ReWalk CEO Larry Jasinski says he doesn’t expect that to change anytime soon. “We believe the system pricing is fair and that it is a net cost-saver to the insuring community,” he says. “Scale will help margins which will allow more focus or spending on R&D for improvements and new applications.” (On Tuesday, ReWalk Robotics set the terms for a $50 million IPO on Nasdaq, valuing the company at $188 million. In its filing, it revealed that it has sold 81 systems to date.)

Another device, Honda’s Walk Assist, is currently under trial at the Rehabilitation Institute of Chicago. (The Japanese company has yet to disclose an expected retail price.) The device is built for fully ambulatory people who may need assistance for one reason or another, such as the elderly.

Despite the promising start, Grishin believes the regulated nature of the medical market makes it unlikely that breakthroughs will happen there. “Innovation happens when you can move very quickly,” he says. “I think the big innovation in this market will not come from medical.”

A number of companies see opportunity in using robotics to ease strain on factory workers who, for example, need to squat repeatedly throughout the day or bear weight while walking. Honda is one of them, and introduced an experimental device for the purpose in 2008. “At the moment, the biggest engineering challenge is in ensuring that the device will work the same way for every body type that may need to use it,” says Jeffrey Smith, an assistant vice president at Honda of North America. “This is not just a device made for the elderly, but it was designed with all of society in mind.”

Smith said that advances in materials and battery technology have been important in the development of Honda’s device—not just for extending its battery life but in providing consistent power levels and performance.

Another, experimental device is more of a wearable robot than an exoskeleton in that it gives its user additional limbs rather than increasing his or her strength. Frederico Parietti, a mechanical engineer and doctoral candidate at the Massachusetts Institute of Technology, is working on research commissioned by the aerospace company Boeing, which faces the problem of its highly-skilled factory workforce aging.

Parietti and other researchers at MIT’s d’Arbeloff Laboratory observed that many Boeing factory jobs were two-person jobs where one worker performed skilled work while another well-trained worker merely assisted, such as holding an object in place. The team began building a robot that could work as a set of extra limbs and perform the less-skilled tasks in a two-person job, freeing up the other skilled worker to do higher-level work. The team’s biggest challenge is software: the robot can’t take voice commands because the factory floor is too noisy, and so must learn to take the lead from the skilled worker.

“We have so many sensors that are recording human motion,” Parietti says. “So how do you extract from those data what is the human’s intention?” The MIT-Boeing system is still in development and may be ready for deployment in two years.

Among the most complex assist devices for industrial use is the Body Extender, the work of the Perceptual Robotics Laboratory (better known as Percro) at the Scuola Superiore Sant’Anna near Pisa, Italy. The exoskeleton, which resembles the futuristic machinery in comic books (Mobile Suit Gundam Wing comes to mind), is designed to greatly increase a person’s strength—up to 10 times, according to the company, which would benefit the handling of materials (e.g. aircraft fuselage panels) too heavy for a single human to carry or position.

Like industry, the military wants strength for its skilled workers. Information about these devices is tightly guarded, but it’s known that what is now Ekso Bionics developed the core technology that Lockheed Martin is using to build the HULC Robotic Exoskeleton (its name is pronounced like the incredible Marvel Comics superhero), a battery-powered, hydraulic system that helps a soldier squat, crawl, and lift while carrying pack loads of up to 200 lbs.

Similarly, Battelle, the science and technology development company, is working with the U.S. Special Operations Command to develop what it calls the Tactical Assault Light Operator Suit. Not much is known about the Talos suit, but the technology site Gizmodo got a good look at the helmet in July, confirming an intention to use technology to pack more gear on a soldier’s body and make it feel like he or she is carrying less than ever. (Will he ever fly? Probably not, but if he can run at length with fifty pounds of dead weight on his body, close enough.)

In Grishin’s view, the military will be too protective about what it develops for its advances to trickle into the private sector for use in other applications. But profits in military technology are a good source for R&D funds for other applications that could reach consumers, he says, and for that reason Grishin is optimistic that gear-heads in certain areas—say, extreme sports—will demand exoskeletons of their own.

From simplified tools to fully developed exoskeletons, wearable robotics are in a sense the debut of a new technological platform. The devices promise to allow individuals—and by extension, the companies and organizations that manage them—to perform tasks with more strength, precision, and computational capacity. The Industrial Revolution and the Information Age each threatened to cut humans out of the picture in the name of efficiency. What if combining them puts us right back in the center?