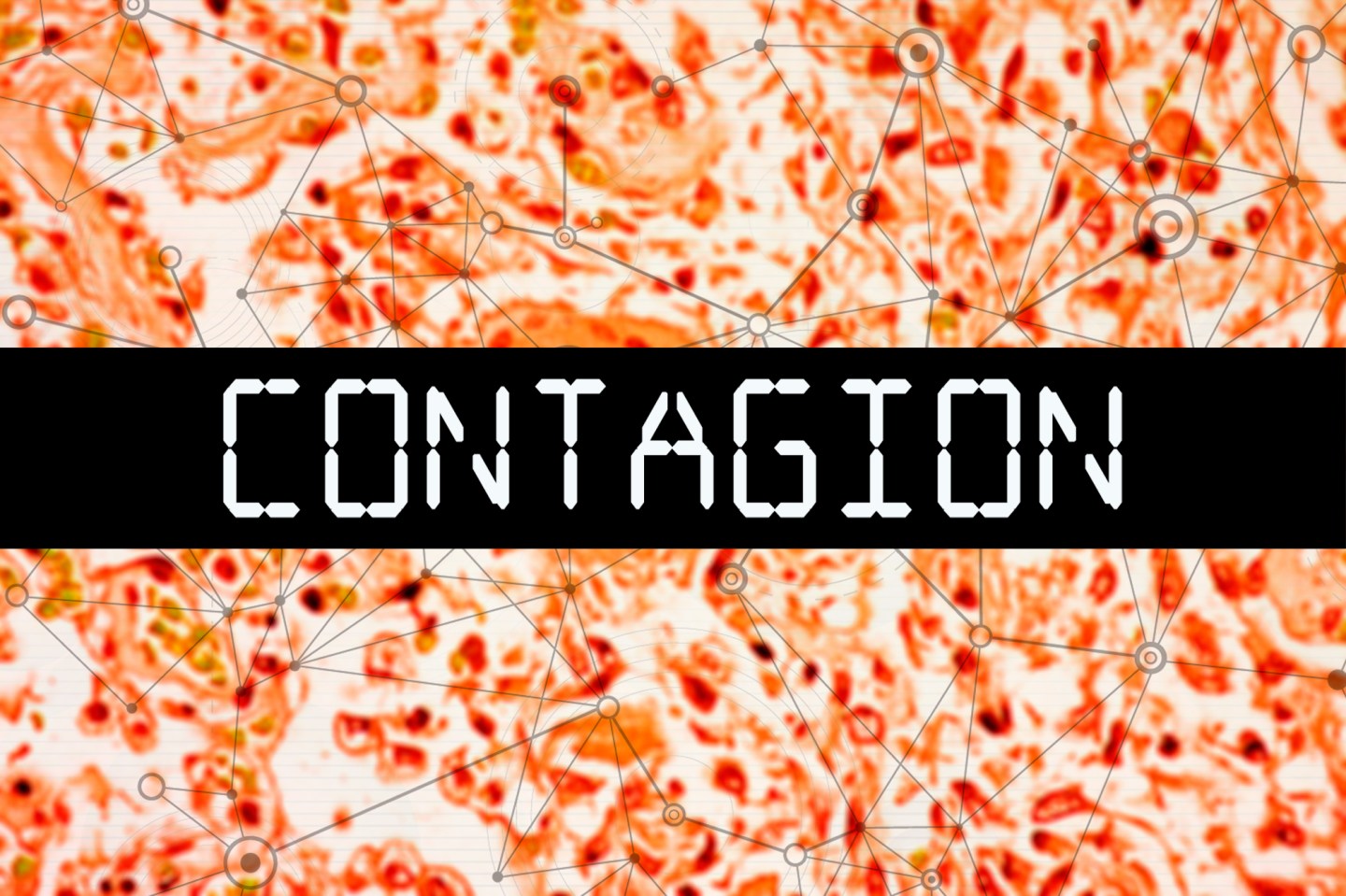 This article is part of our Contagion package, a series that explores the science of how things spread.

It had started somewhere in China, or Mongolia perhaps, emerging like an ancient locust from the soil. Shadowing the Silk Road, it had crossed the vast Eurasian steppe, traversed the Anatolian peninsula, and arrived in Crimea on the Black Sea. Everywhere, death had followed.

At the Black Sea port of Caffa, where merchants from the Italian city of Genoa had set up a trading outpost, the pestilence landed with a fury. The Genoese fled to their ships, racing back through the Black Sea, to the Sea of Marmara, then to the Mediterranean. Unknowingly, they brought the sickness and fury with them. From ship to port—Genoa, Venice, the Sicilian town of Messina, the French harbor of Marseille—the microscopic Yersinia pestis followed, hiding in the stomachs of Oriental rat fleas, circulating in the blood of their prey, the black rat, and within each new human being infected.

The illness came in various forms—bubonic, pneumonic, septicemic. All three were swift, painful and gruesome, with many of the victims developing oozing tumors in their groins, armpits, or necks. Thousands died each day.

It took only weeks for the disease to arrive in Pisa, a center of trade on the Tyrrhenian Sea. It took mere months to carve through Eastern Spain, France and Germany, slicing through the population as if clear-cutting a forest. Ships from Gascony in Southwestern France hauled the disease to Melcombe Regis, a small seaport on England’s southern flank. From there, it was carried to crowded Bristol, a month later to London, and before long to all the British Isles, Norway, Denmark, as far east as Russia.

“The Black Death,” it was called; yet even more fitting was the name, the “Great Mortality”: Over the course of some five years in the mid-14th century, the mysterious plague claimed the lives of tens of millions of people—a reign of terror that, by most assessments, killed between a quarter and half the population of Europe.

This wasn’t the first time a massive, globe-spanning pandemic had taken hold: Eight centuries earlier, the Justinian plague—ostensibly caused by the same microbe—had killed an estimated 100 million people. Nor would it be the last devastating outbreak of Y. pestis. A third major pandemic, the so-called Modern Plague, began in China in the 1860s and claimed at least 10 million lives before it was through.

What triggered any of them? University of Oslo biologist Nils Christian Stenseth and colleagues have shown that reservoirs of the plague bacteria remain common in much of the world (see map below). And sporadic cases of bubonic plague have popped up as recently as this summer in the U.S., and in China, as they did in Madagascar in December. Could another Black Death take hold and, if so, how far would it spread?

The Global Distribution of Plague (A) Map showing countries with known presence of plague in wild reservoir species (red) (after [3]). For US only the mainland below 50° N is shown. (B) Annual number of human plague cases over different continents, reported to WHO in the period 1954–2005. (C) Cumulative number of countries that reported plague to WHO since 1954. doi:10.1371/journal.pmed.0050003.g001;

Experts have warned that climate change might increase the risk of outbreaks in areas where the Y. pestis bacillus is already endemic and that new danger zones may emerge. But it’s all guesswork now. “Remarkably little is known about the dynamics of plague in its natural reservoirs and hence about changing risks for humans,” wrote Stenseth and his colleagues in the journal PLOS Medicine. “Plague should be taken much more seriously by the international community than appears to be the case.”

Yes, centuries after the Black Death, the actual illness at the center of the most famous and studied pandemic in history remains shrouded in mystery. And, importantly, so too does the process of contagion itself, a cascading ripple effect that turns out to be everywhere. Our yawns, our moods, our facial expressions, our memories, our office dynamics, our global banking system are all subject to the forces of contagion, it would seem.

The question is, whether studying one manifestation of the process can shed light on another. Can researching the way pathogens spread, for instance, help us understand financial contagions? (It may be telling that financial crises in 1997 and 1998 were known, respectively, as the “Asian Flu” and the “Russian Virus.”) Or can making sense of “group emotional contagion”—how moods are transferred among individuals in, say, an office or on a sports team—give us insights into preventing “outbreaks” of suicide?

With such aspirations in mind, Fortune set out to explore how various things spread. We asked five writers to delve into seven manifestations of contagion—some familiar, as in the global spread of a virus; some, a bit unusual—and we’ve gathered their essays here (see the links below).

In a pair of posts, Erika Fry begins by investigating how a deadly new coronavirus, the MERS-CoV, emerged in Saudi Arabia, traveled from bats to camels to humans, and ended up in a small community hospital in Munster, Indiana. As the world nervously keeps watch on the epidemic of Ebola, now raging through parts of West Africa, Fry shows why the Saudi coronavirus (a cousin of the infamous SARS virus) has, perhaps, a greater potential to spread.

Jen Wieczner and Stephen Gandel each probe different ends of stock market contagion: Wieczner takes us deep inside the corporate takeover rumor mill, showing how the thinnest reed of conjecture can quickly become stock-jolting gossip; and Gandel, a veteran financial reporter, dives into one of the enduring mysteries of the market—what triggers a sudden broad stock selloff when there’s seemingly no precipitating news? In other words, how exactly does that collective “panic button” get pushed?

If you’ve ever wondered how the term “runaway” ever got hitched to the word “bestseller,” then read Anne VanderMey’s essay on Thomas Piketty’s Capital in the Twenty-First Century, the bonafide nonfiction contagion of 2014. Jessi Hempel, meanwhile, takes a turn exploring another, surprisingly durable, social fad: the “selfie.” As Hempel discovers, the meteoric rise of the insta-self-portrait is due as much to transformative changes in technology as it is to human compulsion…and, well, narcissism. And finally, Erika Fry returns to investigate the investigators: showing how studying viral trends on Twitter and other social media got to be such a viral academic specialty. Welcome to Twitterology 101: the hot ticket on campus.

Adding fuel to each of these contagions is our ever-growing web of connections to the global village, with the virtual tethers now so much a part of our daily lives that they no longer surprise. Every Facebook user, in theory, is just a single friend request away from some 1.3 billion others. Each of nearly 300 million LinkedIn members is a mere click away from an old colleague, a new professional contact, a stranger’s query.

Even when it comes to that old-world concept of human contact, we are more interconnected than ever. Consider the more than 3 billion passengers in the world who will likely travel on an airline this year (based on last year’s figures). With each voyage in the clouds will come an opportunity for a new link or exchange with a stranger—a conversation, a business card, a spilled coffee, a stowaway germ.

Which, again, puts the Black Death of the Middle Ages in stark perspective. That such a far-flung pandemic—blanketing an area of roughly 7 million square kilometers—could happen centuries before the invention of the airplane, the car, the truck, or the train is astounding. (Indeed, the uncanny speed and scope of its spread has led some experts to wonder whether perhaps they’ve fingered the wrong pathogen in that outbreak, and whether the real driver might have been a more readily airborne virus.)

We are, of course, just beginning to understand (and imagine) how contagion may manifest in an age when each of us is potentially just an email, or YouTube video, or middle seat away from the rest of the world. Here, some eye-opening perspectives on how it has revealed itself so far.

• Part 1: How a bat virus became a human killer

• Part 2: How the MERS virus made it to Munster, Indiana

• Part 5: How Americans fell in love with a 685-page economics treatise

• Part 6: How the “selfie” became a social epidemic