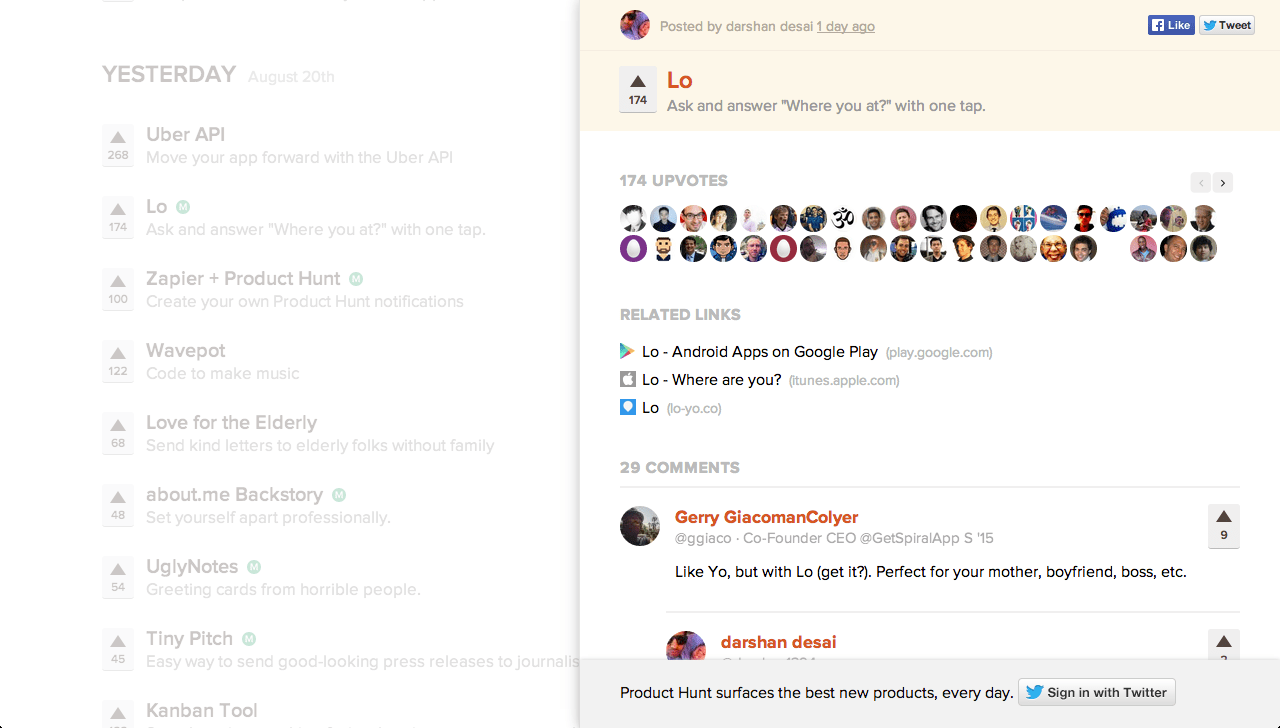 Ryan Hoover is the envy of entrepreneurs around the country. Many startups toil for years, burning through millions of investment dollars, to get the kind of recognition Hoover’s startup has garnered in just nine months. What’s worse, he’s done it with a flimsy Reddit knock-off website his team built in less than a week. That site, called Product Hunt, has captured the attention, and as of today, the investment dollars, of Silicon Valley’s most influential power brokers.

Venture investors like Hunter Walk, Dave McClure, David Tisch, and Mashable founder Pete Cashmore use Product Hunt to discover new products, and founders like Dennis Crowley (Foursquare), Dave Morin (Path), and Mark Cuban (AXS TV) have jumped in to discuss their products. The site has 250,000 monthly unique visitors and has sent 1.7 million visits to products in the last month. More than 51,000 people read the site’s newsletter with a 41% open rate.

Anecdotally, the purveyors of the top products of each day report they’ve been flooded with inbound interest from investors and potential partners. Already dozens of members have hacked together Web tools based on the site’s API. The site grows by 70% each month. Founders are whispering that placement on Product Hunt has replaced TechCrunch as their preferred method of announcing their launch.

So how did Hoover do it? Good timing, mixed with some email hustle and community-building prowess, topped off with a master class in positivity.

As it turns out, the tech community was hungry for a new gathering place, and Product Hunt played directly into its desire. Hacker News, the message board of accelerator program Y Combinator, has long been the de facto online community for Silicon Valley startups. Earlier this year, Y Combinator’s president, Sam Altman, said he thought the message board might be with $500 million.

But in recent years, the community has devolved into petty negativity and occasionally hostile commentary. Last month, the prominent venture capitalist Marc Andreessen took to the message board to ask how it had evolved from a Y Combinator discussion board to “the discussion board where the first comment on any post involving a YC company is reliably someone crapping on it.”

“What an amazing shift,” he wrote.

Product Hunt did not intend to be the anti-Hacker News, but in many ways that’s what it has become. It is hardly a freewheeling anonymous community. The site has grown very carefully, by inviting a group of Valley influencers curated by Hoover and his team to join and comment. Outsiders can up-vote products, but only invitees can comment. Because the commenters are mostly public-facing figures like investors, journalists, and prominent founders in the tech community, they’re more likely to keep negative comments to themselves rather than trash something. That doesn’t scale well, so Hoover has decided the best way to grow is to let commenters invite friends into the commenting pool.

The infectious positive attitude of Hoover and his nine-person team comes through on the site and in its community. They chime in frequently with positive feedback, curate themed newsletters, host personal, jokey podcasts, and gather influencers together for brunch events. You can tell they genuinely love apps, and in turn, they’ve attracted a community of app-lovers.

Ever positive, Hoover says the business question is “a valid piece of criticism.” He acknowledges that a business catering to the small tech and startup community doesn’t seem like a billion-dollar idea. Further, “[Hacker News members] might see Product Hunt as a copycat,” he says. “We’re not solving a clear, obvious need, like ‘This saves lives,’ or, ‘This has X million in revenue per month.’ Obviously there is skepticism.” But he counters that any investment in a consumer-facing tech startup, including Facebook and Twitter, is less obvious in the beginning. “It’s very much based on emotions,” he says.

He has plans to expand Product Hunt into other categories, including gaming, an industry he’s familiar with as a consumer and as director of product at PlayHaven. As for the business model, Hoover imagines Product Hunt will monetize with a fairly straightforward advertising model. Today the site makes opportunistic revenue through job postings. Eventually, Hoover says he’d like to see Product Hunt own the transaction part of its recommendations, allowing people to directly buy the digital products they find on the site.

Product Hunt’s beauty is in its simplicity, which means the site can easily be copied. Hoover believes its real value is in the high-quality community he’s attracted. Keeping the community’s quality high as he attempts to break into the mainstream may be his greatest challenge. He believes Product Hunt can tap into a market of app-lovers who don’t consider themselves early adopters but are anyway. Given how pervasive smartphones are today, “the early adopter thing is shrinking,” he says.